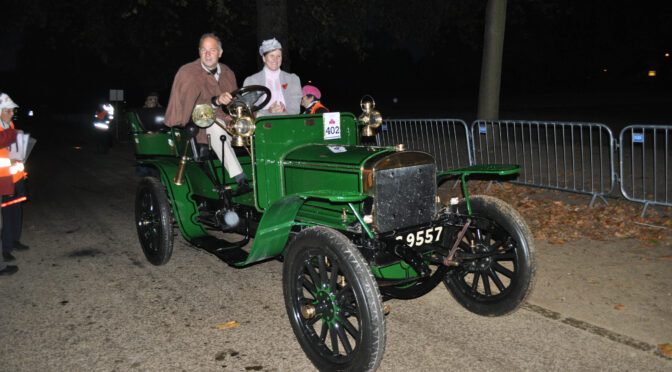 I did question the wisdom of dragging myself out of bed at 5:30AM to get down to the start of the London to Brighton Veteran Car Run bit once I wandered into Hyde Park to see the gathered ancient machinery it all seemed perfectly sensible.

Official start time was just before 7:00AM to coincide with dawn to reduce participant’s reliance on their beautiful but not terribly illuminating acetylene lamps.

Wandering amongst the cars whilst final adjustments were made and pilot lights on Steamer boilers were lit was a delight.  I did manage to scare the life out of one Steamer owner who momentarily mistook my close-up camera flash for his boiler exploding in his face as he lit it! Sorry about that.

It’s on days like this that the saying – “Mad dogs and Englishmen go out in the mid-day sun” seems a bit restricted in its scope. Quite a few ever so slightly mad people were up and about in the early hours of a dark Autumn Sunday to get their ancient motors into Hyde Park for the start of the London to Brighton Run.

Although the event has a uniquely British feel in terms of its eccentricity it’s actually very international with cars entered by boundlessly enthusiastic owners from all parts of the world.

I was particularly keen to meet up with a Turkish entrant which included my friend Ahmet who’d come across from Istanbul to participate in his friend’s 1904 Autocar. As a veteran of the Peking Paris Rally – the 50 odd miles to Brighton shouldn’t seem that daunting to Ahmet but with old cars…..anything can happen.

Post-run update:- I’m pleased to report that after departing Hyde Park at around 07:45 – Ahmet and friends arrived at the Madeira Drive finish line in Brighton without incident at around 12:30!