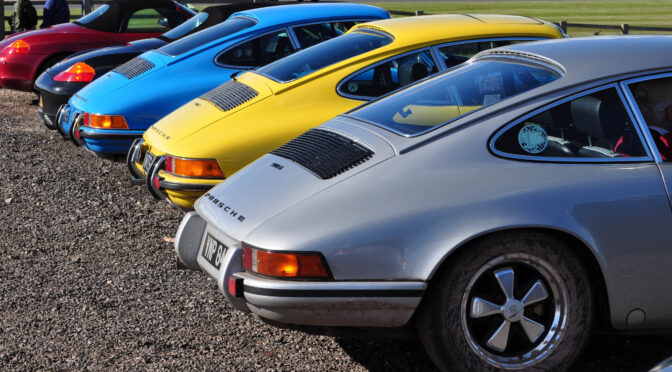 The Donington Historic Festival goes from strength to strength and for 2015 – races were spread over no less than 3 days spanning the early May Bank Holiday weekend. Fortunately for many of the attendees – cold weather made “anoraks” a thermal necessity rather than just a disparaging character assessment!

Donington embraces Classic Car clubs by offering cheap ticket deals to members with the added benefit of parking in marque specific areas of the infield plus the chance to participate in a lunch time parade lap around the circuit. What more can you ask? OK – warmer weather would be nice – sort it out Mr Wheatcroft!

This wonderful Dante Giacosa developed and Luigi Rapi styled 2.0L V8 car was produced by Fiat between 1952 and 1954. Sadly – it wasn’t terribly successful in this factory designed form or in a range of Italian coach built variants constructed by Zagato, Ghia, Michelotti and Vignale.

One 1953 Ghia styled 8V Supersonic body was however once famously mated to an AC 427 chassis by John Williment to create a rather beautiful and extremely potent hybrid.

It was great to see a number of race teams fielding period transporters to give the paddock that time warp feel.

The Edinburgh based Ecurie Ecosse race team founded in 1951 by David Murray commissioned a purpose built car transporter based on a Commer TS3 (TS3 relates to its Tilling Stevens 3 Cylinder 2-stroke engine).  It sold for £1.8 million in the Dec 2013 auction that sadly saw the wonderful Dick Skipworth Ecurie Ecosse collection split up. Such a shame that a Scottish benefactor couldn’t have kept the entire collection together for posterity (suggested policy aim for the SNP)! It is  great however that the Ecurie Ecosse race team has been revived by Hugh McCaig who followed the original team from childhood.

A BMC liveried transporter was parked further along the paddock and its friendly and enthusiastic keepers explained that it was one of 20 or so vehicles built by BMC to demonstrate the benefits of its Alex Moulton designed and Alec Issigonis implemented Hydrolastic Suspension in various parts of the world. This particular example was later converted into a race car transporter and its current very magnanimous owner is putting it to great use transporting her own Healey 3000 race car and indeed other race cars prepared by the very nice people at Woolmer Classic Engineering who also lovingly maintain the transporter on her behalf.

Last but not least – the Connaught transporter was one of three converted Greenline AEC single-decker buses used by Connaught Engineering to transport their race cars around Europe during the ’50s. Between 1952 and 1959  under the direction of Rodney Clarke & Mike Oliver – Connaught constructed F1 cars powered by modified Lea Francis and Alta engines.  They were successfully raced in period by drivers such as Stirling Moss, Roy Salvadori, Ivor Beub, Ron Flockhart, Archie Scott Brown, Prince Bira and Tony Brooks. A certain Bernie Ecclestone was a team owner racing Connaughts in 1958!

From a club perspective – Porsche Club GB (including a number of fellow DDK members) provided a great turnout of cars parked up in prime position on the inside of Redgate Corner.

All flavours of Porsche were represented from ancient (a German registered 356C + 4 early 911s) to modern (the latest GT3, Boxter etc.). There was even a rare and rather lovely 959!

At one point on Sunday we managed to get 3 of the 4 early 911s (Kirk’s Pastel Blue 2.2S, my Citron Yellow 2.2E and a lovely Silver 2.4S) parked up alongside each other which was a very photogenic spectacle. Shame we couldn’t get the very nice US spec 2.2S Targa to temporarily berth alongside as well. Next time!

FYI:- A number of examples of the often brightly coloured early 911s will feature in the PCGB gathering at Silverstone Classic in July. Something to look forward to!

Scarab Automobiles was owned by the Woolworths heir Lance Reventlow who used the engineering skills of Tom Barnes & Dick Troutman to  build a range of open wheel race cars and sports cars between 1958 and 1963.

This 1960 car was built to fight in the European F1  championship but unusually it used a 2.5 Litre, fuel injected 4-cylinder Offenhauer engine which was more commonly and very effectively used to fling Indy cars around US oval circuits.

Having languished for some years in the Donington Collection as an unused chassis – the temptation to insert the period correct 2.5 Litre fuel injected 4 cylinder Offenhauser engine and get it racing was just too great. It was great to see it fighting amongst other Grand Prix cars in the Combined Pre-61 & Pre-66 Grand Prix Cars race.

I saw this car at the London Classic Car show in January. Dating from 1951 – this lovely old beast has bags of really great track, hill climb and sprint racing history in the hands of drivers such as Archie Scott Brown and Peter Hughes.

As I understand it – this car was the 2nd Tojeiro car made but it was the first to bear a BHL (Brian Horace Lister) chassis number (BHL1) and can hence also be regarded as Lister Cars No.1. Thanks to John Tojeiro and Brian Lister as designers/builders and Archie Scott Brown and Peter Hughes as drivers – this launched the Lister racing marque who’s Cambridge built cars lit up European race tracks in the ’50s. Brian Lister sadly passed away in December 2014.

The JAP V-twin engine looks great and its light weight gave the car a really good power to weight ratio enabling it to regularly trounce bigger engined competition. The engine was produced by J.A. Prestwich in Tottenham (next to White Hart Lane football ground) and it powered a range of motorcycles and cycle cars both pre and post-World War II. I have great memories of seeing J.A.P. engined Morgan 3-wheelers being blasted along Madeira Drive at Brighton Speed Trials by ancient enthusiasts clad in their equally ancient stiff and crusty bike leathers. Upon seeing one of the J.A.P. engine Morgans at close quarters at Brighton my Tokyo born Mrs for some inexplicable reason declared that she wanted one!

Getting off to a great start by using a Reid Railton (designer of Malcolm Campbell’s Bluebird land speed record car) designed chassis and utilising a proven Riley 6 cylinder engine as the basis for their race unit – success quickly followed.

I have a particular interest in E.R.A.s thanks to a book given to me some years back by my mate Gordon – “Road Star Hat Trick” is great  little book about Prince Bira’s successful racing year of 1936. The book was written by his cousin the Siamese Prince Chula Chakrabongse who also owned and ran their White Mouse Racing outfit which campaigned the memorably named Hanuman, Romulus and Remus ERAs.

Chatting to the driver of this lovely 1935 2.0L ERA R4A which pre-dated the Prince Bira cars – he explained that it had won the South African GP and it had previously raced at Donington – 80 years ago! It was a privilege to see it being blasted around Donington again amongst the Pre-61 and Pre-66 GP car grid with great aplomb.

Officine Specializzate Costruzioni Automobili – Fratelli Maserati SpA (bit of a mouthful) was founded by the remaining Maserati brothers (Ernesto, Ettore & Bindo) in 1947 after they managed to extricate themselves from Maserati – the company they founded and then sold to Adolfo Orsi.

O.S.C.A. targeted the 1100CC racing class using Fiat derived engines, gradually expanding to bigger capacities. O.S.C.A. race cars and barchettas continued the elegant simplicity of the Maserati brothers design with some success but the company was sold in 1963 to Count Domenico Agusta (of MV Agusta fame) with the brothers staying on for a while in a design capacity to create amongst other things – an interesting Mercedes influenced desmodronic valved engine.

It’s lovely to see such beautiful and well prepared machinery racing alongside other Formula Junior survivors.

Other Lovely Motors At Donington

What a great couple of days of classic car indulgence. A fantastic opportunity to meet-up with mates and like minded enthusiasts against the perfect backdrop of race cars whanging round the track and even a Spitfire roaring across the rather changeable sky.

Thanks to Gordon, Ken, Jim & Kirk for the company, car banter & quails eggs!