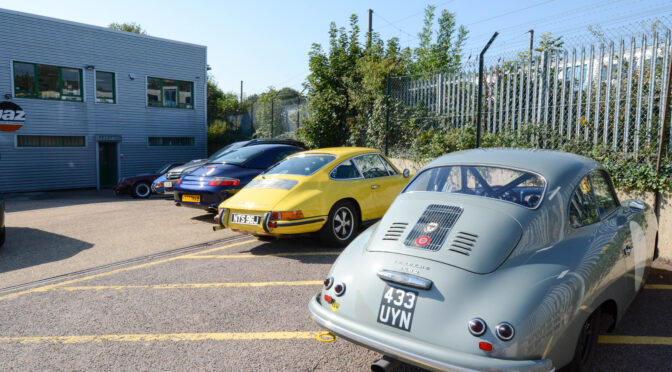 Whilst listening closely to the Yellow Peril’s engine earlier this week (as you do) – I noticed a bit of a mechanical clattering noise coming from left hand throttle body as I revved the engine using the throttle linkage.

This odd noise and the fact that the engine had gone a bit off-song since its trip to Le Mans Classic in early July prompted me to arrange a visit to see Steve Winter at Jaz Porsche for his expert opinion.

A quick blast up the M1 to St Albans warmed the engine up nicely and shortly after I arrived – Steve stuck his head under the engine lid to listen the engine running. His swift diagnosis was “chattering butterflies”!

Whilst this was a relief in that Steve confirmed the definitive cause of the noise indicating worn throttle butterfly mechanisms – it will mean that the throttle bodies will need to be rebuilt in the near future. Once sorted however – this should also enable the tuning to be fully sorted and the Yellow Peril should be raucously flying again!

Diagnosis completed – I let Steve get on with the urgent task of preparing cars for the Brands Hatch Festival of Porsche whilst I had a snoop around the lovely machinery and Porsche bits and pieces currently housed in Jaz premises.

There was a positive abundance of 356’s which was great. These are such jaw-droppingly beautiful cars!

It was interesting to see Steve’s 911 2.2S engine part way through its rebuild on the engine stand.

And there was an Ernst Fuhrmann designed 4-cam Carrera engine on a trolley also awaiting attention.

Steve’s Red Rocket race car was receiving some sorting out prior to it’s outing to Brands Hatch.

Job done – I blasted back to London but as I was about to put the car back in the garage – I noticed a hairline crack in the windscreen.  Old cars! Don’t you just love them!

Thankfully I will be able to drive the Yellow Peril to the Brands Hatch Festival of Porsche albeit with “chattering butterly” accompaniment!