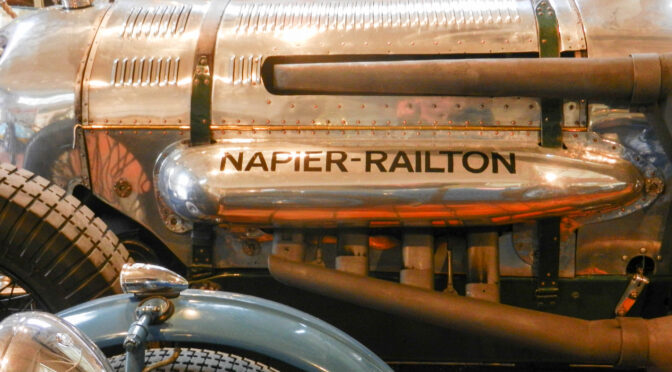 The autumn clock change softened the blow of having to get up early to drive my noisy 911 through slumbering London to Brooklands.

As I neared my goal on a damp and misty morning I joined a long queue of like minded enthusiasts in their precious cars.

A full English breccie and strong coffee in the Club House set me up for some serious car nerd mooching around the visitors car parks and the museum exhibits.

A wide range of American cars and trucks were gathered together in the parking area near the base of Test Hill.

Whilst American cars as a whole don’t float my boat – I do have a grudging admiration for certain models, their chunky V8 engines and for some stylistically bonkers bodywork.

You could fit a Mini into the boot (sorry trunk) of the Cadillac de Ville.! The Ghia Coupe was quite unusual and weirdly beautiful.

No visit to Brooklands is complete without wandering to the edge of the site to gaze in awe at the remaining parts of the banked circuit.

Climbing to the top of the steep banking is not easy and is highly discouraged but it does make you wonder how pre-war Brooklands racers managed to hang onto the banking when near the top. Driving flat-out at Brooklands required phenomenal bravery.

The Test Hill is also a lovely relic of times gone by but it’s still actively used and whilst I was there it was being swept of autumn leaves for test runs by adventurous visitors.

As luck would have it – I drove into Brooklands immediately behind a Cisitalia. I love these cars – they’re jewel like in their beauty and simplicity.

Cisitalia’s are automotive works of art as borne out by the fact that a 1946 202 GT has been on display in the New York Museum of Modern Art since 1972.

This particular car is  a 1947 202 Mille Miglia Nuvolari Spider. Named after the “Flying Mantuan” who despite dreadful weather conditions and ill health – so very nearly won the 1947 running of Mille Miglia in a diminutive 202 MM against far more powerful opposition.

I can honestly say – I’ve never seen such a large gathering of DeLoreans – I counted eleven at Brooklands. Not sure what the collective term for these cars is but lined-up with all of their gull-wing doors open – I reckon “a flock of DeLoreans” is appropriate!

Apparently – around 6,500 cars survive of the 9,000 cars originally built. Their cult following suggests that this number is unlikely to diminish and their longevity as usable classics is also being “enhanced” by some being converted to electric power.

Not sure why so many turned up at Brooklands. Maybe it was the clocks going back that led to the “Back To The Future” homage!

Jags are quintessentially British and there’s always a great turn-out of them in various forms at UK car events. The XK120’s and the 120 derived C-Type were my favourites.

The odd one out is the Steadman TS100 which looks like an SS100 but was manufactured as a car in its own right in the ’80s. It did use Jaguar mechanicals however.

To call this a kit-car does it an injustice as it really does look like a genuine period sports car.

It looks great and must be a hoot to drive.  I want one!

It’s always nice to see some fellow Porsche drivers and their cars at events like these and thankfully there were a range of models represented.

There were lots of other great cars to see in and around the museum and for those so inclined there were also the bus and aircraft displays. A great morning out!