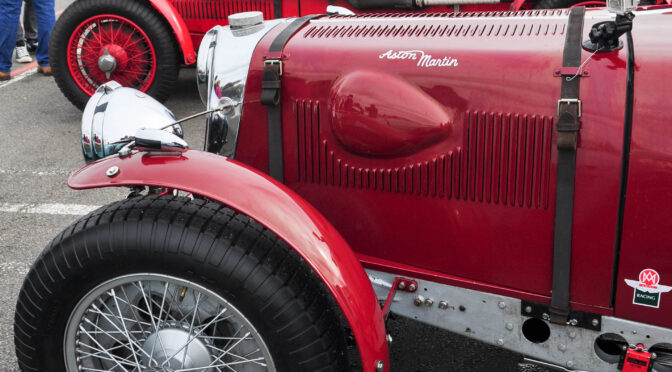 AMOC race meetings can always be relied upon to produce some interesting cars on and off the grid and like most club events there are some incredibly friendly owners who are only too happy to talk about their cars. This particular meeting did not buck the trend!

The main event for me at any AMOC gathering are the wonderful pre-war race cars which have passed through several generations of  caring custodians. These priceless cars were built to race and its great that they still are still raced very enthusiastically by their current owners.

The LM15 and LM16 cars date back to 1934 when they were originally built (as LM11 and LM12) to compete at Le Mans where they and sister car LM14 unfortunately retired part way through the race. Immediately after Le Mans LM11 and LM12 were completely rebuilt with new un-drilled chassis to compete (as LM15 and LM16) in the RAC Tourist Trophy in Ulster along with a new LM17 car.

It was their success in securing the top 3 places in the Ulster race which led to the birth of a number of Aston Martin “Ulster” replicas.

As a British car manufacturer – Aston Martin has led a precarious existence for most of its life lurching from one financial disaster to the next and changing ownership on a regular basis. Despite this fraught existence it has produced some iconic and beautiful cars.

The David Brown period was for me the zenith of their creativity because the DB2,3,4,5 an 6 cars were sooooo beautiful. My favourites are the DB4 – most especially the DB4 GT and the DB4GT Zagato but it’s also difficult to fault the DB5 made famous by it’s selection as the (Sean Connery) James Bond car in Goldfinger. The combination of beautiful Carozzeria Touring body over a Superleggera frame with a powerful Tadek Marek designed all alloy straight-6 engine was superb.

I also really like the look of Project DP214 race cars. These were an onward evolution of the DP212 project using a DB4GT chassis clothed in a lower, wider and longer body specifically to compete at the 1963 running of Le Mans in the GT class. Despite the efforts of such wonderful driver pairings as Jim Kimberly  & Jo Schlesser and Bruce McLaren & Innes Ireland both cars retired during the unforgiving 24 hour race. Subsequently the cars enjoyed  some race successes but completion of the Le Mans 24 hours eluded them again in 1964.

After trying very hard to like them – the William Towns designed V8 cars still fail to excite me from a body design perspective but their engines are awesome.

Newer Astons? Sorry – they do nothing for me.

The company was acquired by the Adlington brothers in 1929 at which time the company name changed to AFN which went on to be the main importer of BMW cars from 1936 and Porsche cars from 1954. AFN was bought by Porsche in 1987 to form Porsche GB.

The Targa Florio was one of a range of post war Frazer Nash cars which shared DNA with the BMW 328 – the mainstay of AFN’s BMW imports from 1936. Designs of the BMW 328 engine were provide to Bristol as war reparations and this was used in a number of 1950s race cars.

Named after the famous Sicilian road race – most of the 15 Targa Florios built used the 2L Bristol engine with just one using the Austin Atlantic engine and this 1952 edition would appear to be the one 2660cc Atlantic engined car.

I’ve always loved Jaguar XKs but my preference has shifted over time from the XK150 to the XK140 and now to the sublime XK120. Don’t get me wrong – the later cars are nice but they lost the purity of form of the original XK120 as it was conceived by Sir William Lyons and his close associates.

The story goes that design discussions filled the long nights on the roof of the Jaguar factory on the lookout for incendiary bombs being dropped by German bombers during WWII. Key prerequisites such as the visually beautiful and powerful twin cam engine were agreed and Jaguar hit the ground running at the end of hostilities.

Early speed testing of the car on the long straight Jabbeke Highway in Belgium delivered speeds of 120mph and beyond giving rise to the XK120 model name. This car then catapulted Jaguar out of the pre-war norm of cars with running boards and vast separate headlights into a new sleek streamlined world offering lucky drivers the  opportunity to travel at speeds previously only attainable by racing cars on race tracks.

Early adoption by such Hollywood glitterati such as Clark Gable assured the cars success but this was further sealed by rally and race successes both sides of the pond and the spawning of a full race version – the C-Type Jag which achieved Jaguar’s first outright win at Le Mans later to be followed by the D-Type and E-Type.

Lagonda is a quintessentially British car in the same vein as Aston Martin, Bentley and Rolls Royce but rather weirdly Lagonda is a Native American (Shawnee tribe) name for the town of Springfield in Ohio. Springfield was the birthplace of Wilbur Gunn who founded Lagonda after a rather varied career as an opera singer turned engineer.

The company was founded in Staines in 1906 gradually building more sophisticated cars and also switching to armaments manufacture during WWI before being taken over by Alan P. Good who enticed W.O. Bentley to join as chief designer. W.O.’s influence resulted in the LG45 and LG6 cars and then the fabulous V12 Rapide before the factory again switched to armaments manufacture during WWII.

David Brown subsumed Lagonda into Aston Martin in 1947 enabling the W.O. designed 6 cylinder engines to power the early DB cars during the 1950s. A number of Lagonda names have subsequently featured in the Aston Martin model range.

The cars on display in the paddock and flying round the track in the Pre-War Team Challenge included the 1930 2L, the 1931 2L LC and the LG45 Fox & Nicholl.

Here are a few other nice motors that caught my eye.