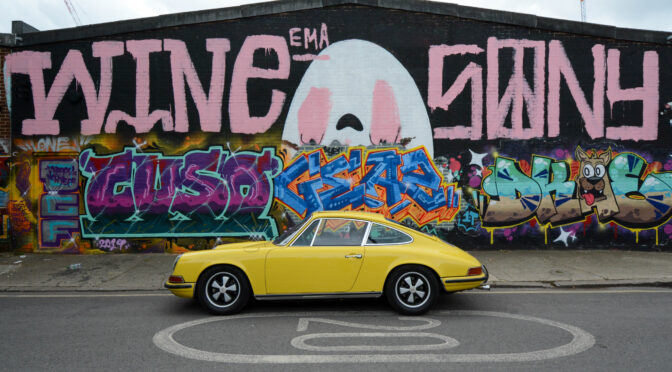 Flaming June? I think not!

Porsche Club GB’s monthly get together in Hackney Wick was predictably less busy than normal due to lots of the usual attendees being at Le Mans but heavy showers didn’t help either!

Before the rain fully set-in, I managed a brief chat with fellow Porschefiles lamenting the sad continued absence of Porsche factory cars in the LMP1 category and our consequentially reduced interest the greatest car race on the planet.

I then got part-way through an interesting conversation with a Turbo owner about his quest to buy a 356 before the heavens opened and pretty well everyone sought shelter and a smoked salmon brunch in Forman & Sons.

Meanwhile, I tried to continue my soggy snoop around the gathered cars in the hope that the showers would quickly pass. They didn’t!

Never mind. Before heading home, I managed one last chat with the Mancunian owner of a rather nice 924. I think this was the first one I’d seen at this event and it was a really nice example in a handsome shade of green.

The owner showed great taste both in her relatively recent 924 purchase and in her admiration for the Yellow Peril.

As the rain belted down even more heavily, it was time to head home to catch up on the Toyota dominated Le Mans race before heading out again to the Manga exhibition at the British Museum.

Come rain or shine, London is a great place to live.