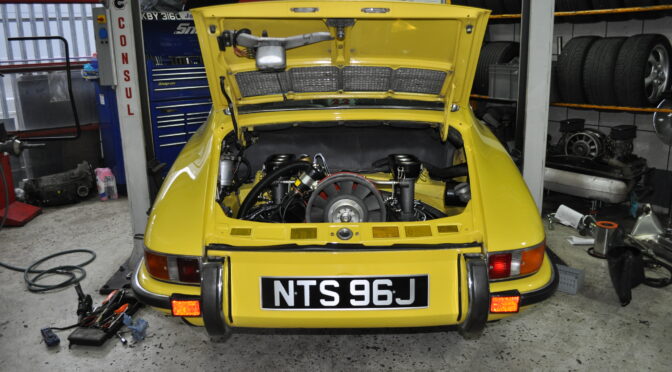 This could be the range of emotions that you’d expect to go through as an integral part of classic car ownership but in the context of this post they refer to remaining problems that had to be sorted out on my engine following its complete rebuild.

With the benefit of hindsight – driving the car to Le Mans in June 2014 before the engine was fully sorted and properly set-up  wasn’t one of my better ideas!

Steve did his best to sort things out but both he and I were unaware of some underlying issues which impacted performance and smooth running during the trip.

Thanks to Steve’s perseverance in analysing the multiple, linked issues and sorting them out I now have a car which is running so much better than on the Le Mans trip that I barely recognise it. I just can’t stop grinning whilst driving it!

Just before setting off for Le Mans – I urged Steve to fit the new electronic dizzy.

This wasn’t as straightforward as I’d expected as lots of other things had to be changed to accommodate it. Even after all the (thankfully reversible) changes were made – Steve just couldn’t get the engine to idle at anything less than 1100-1200 rpm.  Trying various fuel mixture adjustments and tuning settings he ended up having to leave it on quite a rich mixture for the engine to run half decently.

NB: We now know that these tuning difficulties were caused by a number of problems including  a knackered silencer, possibly dodgy distributor, fuel metering pump out of whack and air leaking through the air box and throttle bodies.

So – running out of time before I was due to set off for Le mans – Steve set things up as best he could and off I set pausing only to pick up my mate Gordon from Whitstable en route to the Eurotunnel.

Initially the car went like a very noisy train and it was proving quite hard to restrain it below legal speed limits. About half way between Calais and Le Mans however the exhaust noise became unbearably loud and “boomy” as if the silencer had some suffered serious internal eruptions (I’m talking the John Hurt chest explosion in Alien here!!!) and the engine revs started to “hunt” around making it difficult to drive smoothly.

To cut a long story short – we passed up Steve’s kind offer of investigations and/or adjustments during the Le Mans  race (as he was also there to witness Porsche’s return to LMP1). Gordon and I focussed instead on enjoying the race. Knowing now that there were multiple problems – we made the right decision to just nurse the car home afterwards for thorough investigation and fixing.

After Steve’s return from a further trip to Le Mans (Classic this time) to co-drive a 2.5ST I took the car back into Jaz so that he could methodically work through the problems, carry out a barrage of tests and try out various configurations to gradually  eradicate possible problems from the equation and identify and sort out what was really wrong.

Steve worked through the problems in a necessarily meticulous way amongst his many other race prep, servicing and restoration commitments to gradually eradicate possibilities and to find and fix the various underlying problems along the way.

As you’ll have worked out from the series of Posts covering my engine rebuild – it’s been a catalogue of problems from start to finish and I’m just grateful that Steve stuck with it.

The plan had always been to fit a new electronic dizzy from 123Ignition. Steve had tried this modification out before on other early 911s and he (and the car owners) were pleased with the results.

To fit the new dizzy – Steve had to make some (reversible) wiring changes and swap the spark plugs for ones without in-built resistance. Then using the output readings from the dyno test – he was able to programme the dizzy.

Steve had real difficulties getting the level of advance needed for optimal tuning and achieving sensible rpm at idle was particularly elusive.

He eventually reverted to a more conventional Bosch based dizzy that he’d built-up for one of his race cars. This seems to have done the trick and Steve was finally able to get the advance setting he needed and achieve the tuning he wanted.

It’s still not clear if the particular electronic dizzy Steve tried to use is at fault or whether some other issue or engine/electronic  configuration peculiarity of my engine prevented it from being set up properly. The manufacturer who Steve contacted about the problems obviously have their view but the fact of the matter is that the engine now runs well on a conventional dizzy when it didn’t on the electronic one.

Steve has now identified a builder of bespoke Bosche type distributors who will be used to build the one I ultimately need .

Air’s funny stuff. You’d think that too much of it wouldn’t be a bad thing but in the context of internal combustion engines – especially those with finely balanced Mechanical Fuel Injection the amount of air mixing with fuel has to be just right.

The warped plastic air box on my engine didn’t inspire confidence either in terms of possible air leaks or potential fires as the cold start tube was coming adrift and was prone to squirt fuel upwards into the roof of the air box instead of down into the inlet manifolds.

Consequently one of the 1st jobs Steve tackled when I returned the car was to fit a metal air box I’d bought from a fellow DDK’er (thanks Andrew) and that Steve had refurbished. The one outstanding issue with this is that to be absolutely authentic – it really needs the right sized clips and/or different cups which sit on top of the inlet manifolds. We think the cups are from a carburettor engine as the clip location points just don’t line-up.

What a strange bag of bits my engine has proved to be!

The other problem causing a surfeit of air was my throttle bodies. These have been a constant issue with my engine since I bought it second hand many years ago.

Due to awful pitting – they were bored out and rebuilt with new butterflies etc. quite some time back. We’re not sure how they got in that state in the 1st place but suspicion rests on an engine fire at some point in its life – probably caused by the naff plastic air box and wayward cold start tube!

The throttle bodies were rebuilt yet again as part of the engine rebuild but in an attempt to take them back to standard/as-new condition this included machining and sleeving of the bores and then re-bushing (again).

Unfortunately – this still seems to have left gaps allowing air to get in so I’m now looking for some 2nd hand 2.2S throttle bodies.

Steve’s long held theory about the old silencer was spot-on.

There was no tangible evidence of problems with the stainless steel twin pipe Dansk silencer (i.e.  no holes and no evidence of broken bits rattling around inside) but from the horrible booming noise it was making during and after the Le Mans trip  – there was obviously something very seriously wrong.

My theory is that problems with the silencer internals must have gotten worse during the Le Mans trip and this was the main cause of the engine running increasingly roughly on the return leg of the journey.

The moral of this particular bit of the story – is “listen carefully to the concerns of highly experienced mechanics and act early to eradicate problems before they bite you”!

With the exception of the SSI heat exchangers – the silencer was pretty well the only bit of the engine that wasn’t replaced or refurbished. Steve suspects that if we had replaced it before or during the dyno running-in – it would almost certainly have helped to deliver the dyno bhp readings that Steve expected of over 200bhp instead of the 190 achieved.

So Where Are We And What’s Been Done?

My engine clearly fits into the problem-engine category!

The good news is that the engine is now in extremely rude and raucous health.

Steve’s dogged persistence paid off and my 2.2S short stroke engine with period correct modifications has been transformed from a leaky, noisy, smoky, asthmatic chugger into a smooth running, leak free,  powerful motor. As Steve says – the car’s now running like an early 911 engine should and it’s a delight to drive!

So in summary here’s what Steve had to do to get the engine running properly:-