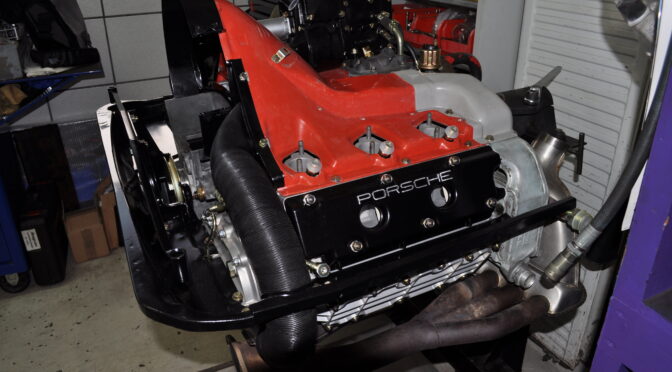 Work prevented me from getting across to Jaz earlier but It was clear upon arrival that Dave had been a busy man. The engine was looking almost complete with heat exchangers, cam covers, timing chain covers, MFI fuel metering pump, engine tin ware, modified shroud etc. all attached. The quality of finish on each individual compent just takes your breath away.

Dave explained that he’s itching to complete the rebuild but is still awaiting the return of the throttle bodies and the fan. The throttle bodies had some pitting inside the bores so Steve’s preferred solution is to bore them out and fit machined aluminium sleeves. Filling the pitting was an alternative but it could have resulted in the filling coming out at some stage and causing damage and this was not something  that Steve (or I) wanted to risk after such a meticulous rebuild.

The throttle body butterflies are being re-bushed and honed to improve their fit within the throttle bodies otherwise there could be some annoying and power-sapping clatter from the butterflies not seating properly and air getting through when it shouldn’t.

Steve confirmed that all of the injectors had been replaced. Not all of them failed testing but it would have been pretty silly to fit a mismatched set of new and old injectors given what’s been done to completely refurbish the fuel metering pump and to ensure that everything else on the engine is new or as new in terms of condition and/or specification.

The fan is being refurbished at a place near Aylesbury so the current plan is that Steve will pick this up and fit it when he delivers the engine to Neil Bainbridge at BS Motorsport which is also just outside Aylesbury. Once Steve has fitted the final components the engine will be plugged into the BS Motorsport dyno test cell for running-in and fine tuning. Steve has strongly recommended the dyno approach for several reasons.

Benefits Of Out Of Car Engine Dyno Testing

1) It enables the engine to be run-in over several hours through an automated programme across the full rev range before it’s put back in the car. This removes the risk of the over enthusiastic owner not following strict running-in procedures.

2) The engine is run-in within a fully controlled environment and any issues e.g slight leaks or minor adjustments can be dealt with there and then. Less easy when the engine is in the car.

3) The comprehensive monitoring and data logging of the run-in provides documented and graphical evidence of the power, torque and all other relevant data before and after fine tuning and adjustment. This (and a video-log if required) is provided to the client in the form of a confidential report on the engine.

4) Steve gets to confirm (on-site) that his last minute fine tuning and adjustments deliver best possible driveability for the car (not necessarily related to max bhp and torque as the smoothness and consistency of power delivery is the most important aspect).

5) Steve also gets to quickly and easily carry out the 1st oil change and service on the engine before it goes back in the car. Without the out of car dyno approach – this would have involved a return visit to the garage following completion of in-car running-in.

At Steve’s suggestion – I’ll try to go along for the latter stages of the dyno run to see for myself what is achieved following final adjustments. It’s going to be quite intriguing and more than a little exciting to see what the engine delivers.

Talking to Dave about this – he’s pretty confident that he’s set-up everything as best he can on the engine stand so it should run pretty well “out of the box” and final adjustments by Steve will hopefully be resticted to minor adjustments to timing and fuel metering.

Pausing only to have a good snoop around the 3 SWB 911 race cars up on the ramps – I headed home a happy man.

Just awaiting the call from Steve now to experience some of the dyno testing. 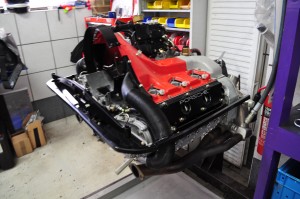 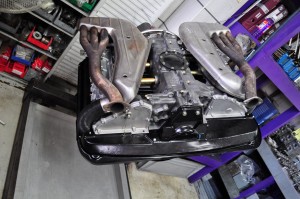