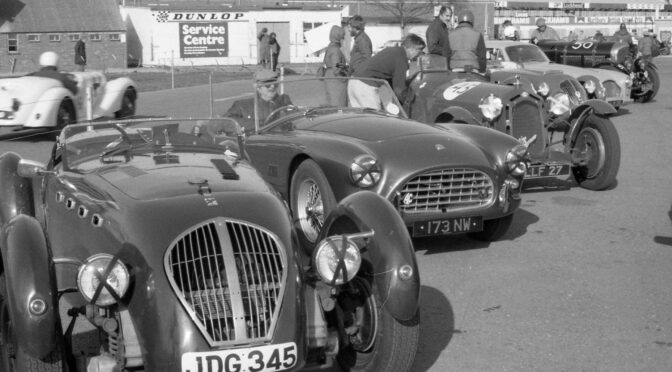 OK – not exactly an up-to-the-minute report but I recently found a bunch of old negatives from various motoring events that I attended in the late ’70s and early ’80s.

Now digitally scanned – these images remind me of how ill-attended some of these events were at the time when compared to modern-day classic car gatherings such as Silverstone Classic, Donington Historic Festival, Goodwood’s Members Meeting and Goodwood Revival.

The VSSC Sprint was traditionally held early in the year and it acted as an opportunity for owners to shake-down their precious cars and blow the cobwebs away on-track after the winter lay-up and/or over-winter rebuild. 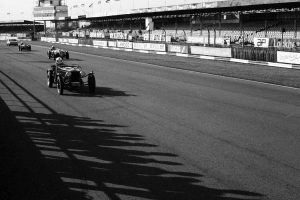 This was essential preparation for cars and drivers ahead of the full-blown classic racing season and it featured an eclectic mix of cars which not just restricted to “Vintage” models.

The precise definition of “Vintage Cars” applies to models built between 1919 and 1930 but is often extended to the period up to and including WWII.

Firmly within the Vintage category – such marques as Alfa Romeo, Alvis, Bentley, Bugatti, Maserati and Morgan were well represented and their drivers delivered some spirited driving to put themselves and their cars through their paces within a mixed grid.

This 8C 2300 Monza looked fabulous and was no slouch around the track.

Bugatti’s are always a delight to see and they were built to be driven.

They are a strange mix of art and engineering with a combination of traditional and much more innovative design features (e.g. quick release alloy wheels which incorporate the drum brakes.

I’m hoping to get back up to Prescott (home of the Bugatti Owners Club) later this year as 2018 marks the 80th anniversary of competitive events there.

It’ll hopefully result in an even better turn-out of old Bugs than is normally the case.

Pre-war Maserati’s are also works of automotive art and are from the period when the Maserati brothers were still in charge.

I think this is Maserati Tipo 26 – the wider seat suggests it’s a 26M Sport meant for endurance racing…………..but I could be wrong!

Despite it’s deficiency in the wheel department – the three-wheeler  Aero Morgan is a great little car which makes a feature of the particular motorcycle engine being used up-front. In this instance – it’s a lovely Matchless V-twin.

The Classic category featured cars which spanned the immediate pre/post-WWII divide in the form of Healey Silverstone, BMW 328 and a couple of Frazer Nash models (the Le Mans Replica and Sebring).

The AC Ace’s were particularly nice with their very simple but elegant lines.

They also looked very composed whilst circulating around the track.

Of the Ferraris out to flex their muscles – it’s hard to decide whether the the 250 GT Lusso or the 400 GT was the more incongruous for track action.

The 400GT after all was a full four-seater family  family saloon for trans-continental touring – well it was for the families of Ferrari loving plutocrats!

On the other hand – the 250 GT Lusso is luxury two-seater GT sportscar . This car is priceless in the current classic car market but in the early ’80s it was something of a sleeper with much time to pass before it went fully stratospheric in terms of value. I can’t really imagine current Lusso owners risking their cars out on track in amongst a bunch of amateur drivers.

The Lusso was and is  beautiful looking Grand Touring car from a golden age of Ferrari manufacturing.

I have to say – I’m less well enamoured of the 250GT 2+2 from a stylistic perspective but these were well engineered cars and deserve respect on that basis alone.

The confusingly named Le Mans Replica – was simply a factory built replica of their successful Le Mans entry and not a much later “replica”. The Sebring was another model named after a famous race track – in this instance Sebring – a former US airfield converted into a race circuit.

Frazer Nash were the first British importers of BMW and Porsche cars (pre and post WWII respectively – with the company morphing first into AFN (Aldington Frazer Nash) and then into Porsche GB.

The 2.7RS was a legend in it’s own lifetime thanks to its limited production run of around 1,500 cars and it’s basic, lightweight, no-frills construction and wonderful flat-six engine.

The lack of a number plastered on the side of this car suggest it wasn’t destined to join others out on track but – I’ve included it because the Maserati Khamsin is such a lovely looking car.  Its rather wedgy and angular Bertone design is a little at odds with my normal preferences but it just works and it also benefits from a stonking great 4.5 Litre Maserati V8 engine.

The Jaguar D-Type needs no introduction. It comes form a period when Jaguar were unassailable in sports car and endurance racing – along with its immediate ancestor  The Jaguar C-Type.

In finned and head cowl form – the D-Type is beautiful from any angle and its potent straight-six XK engine was usually un-burstable enabling a host of gentleman drivers including Ivor Beub, Mike Hawthorn, Stirling Moss, Duncan Hamilton and Tony Rolt to achieve outstanding victories during the 1950’s.

The C-Type is a good looker too!

When racing technology moved-on – Jaguar converted remaining D-Types into the sublime form of the XKSS – effectively a progenitor of the E-Type. A ’54 D-Type with impeccable racing provenance will be coming up for sale at Sotheby’s Arizona sale in Feb 2018 with a guide price of $12 to $15 million. Bargain!

Whilst it is nice that appreciation of old cars has increased to a massive extent – I have to confess to missing the cosy camaraderie of much smaller events such as this VSSC Sprint which allowed the easy mingling of shared enthusiasm between owners, drivers and spectators.

The big events bring out an enormous number of interesting cars but the experience can be overwhelmed by the sheer number of spectators. Cosy and friendly events do still exist – they’re just harder to find!