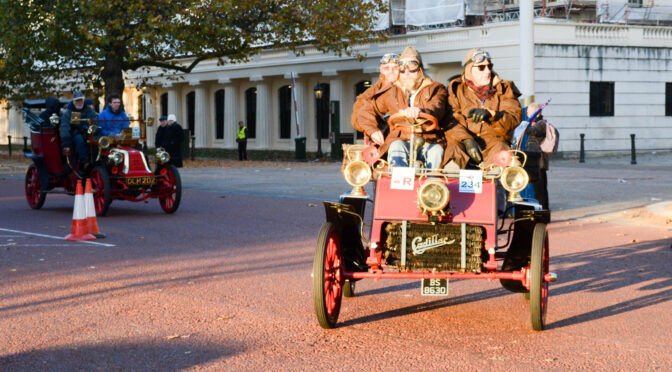 Normally I go down to Hyde Park to see the veteran cars receive last minute preparation before setting off as dawn breaks but this year I had a bit of a lie-in.

Hopping on the first tube – I headed for Leicester Square and then took a brisk walk down Charing Cross Road and across Trafalgar Square to the Mall to watch the cars turn onto Horse Guards Road en-route for Brighton via Parliament Square and Westminster Bridge.

There was a serious chill in the air but the sun shone brightly  and with hardly any other people around it was a great vantage point to see the cars in action.

The pictures speak for themselves. Scores of veteran cars streaming (some – steaming) past with the odd fire-engine, penny farthing and a couple of more modern buses thrown in for good measure.

Some familiar faces could be spotted behind the wheel and in passenger seating.

F1 pundit and former team owner – Eddie who was Jordan piloting  a 1901 Benz Spider later commented that his experience had equalled the best day he’d ever had in F1.

Other racers in the form of Ross Brawn and Nick Mason participated as did Wheeler Dealer’s tall-guy Edd China. Model petrol head Jodie Kidd also took part and the Children In Need buses were piloted by Chris Evans and the One Show’s Alex Jones.

On this event however – the cars were quite clearly the stars and they provided a perfect spectacle on a sunny autumn Sunday. The  veteran cars chugging purposefully from London to Brighton were poetry in motion!