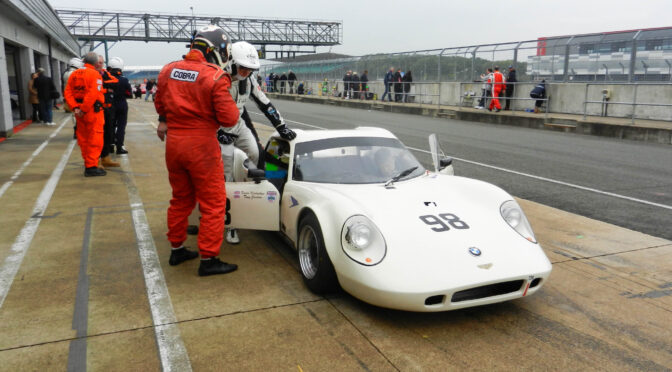 Having missed so many motoring events this year because of work commitments and other reasons – it was nice to attend this final HSCC event of the year.

This year’s event was over two days presumably because last year’s one day event ran out of daylight forcing drivers in the last race of the day to drive with lights full-on as dusk descended.

70’s Road Sports, GT’s/GT Prototypes and Historic Touring Cars balanced the mix of cars with a nice range of saloons and sports cars all driven enthusiastically on what started out as chilly but eventually sunny day.

An enormous range of single seater cars were racing across various categories. Great to see these cars being preserved and actively campaigned.

The Formula Junior cars looked particularly elegant with their pencil-thin bodywork which must have favoured drivers with jockey-like physique!

I really like GT cars as they’re not so far removed from road going sports cars. Chevrons are a particular favourite and they were well represented. They use the absolutely bulletproof 4-cylinder BMW 2.0L engine as used in the BMW 2002 .

The same blocks were also used as the basis of BMW turbo F1 cars to great effect. The F1 teams used “green” blocks rescued from scrapyards on the premise that if the blocks had survived over 100,000 miles and out-lived the parent car – they were strong enough for a second life in F1!

Probably my favourite category of historic racing as it features some cars I’ve owned and lots more I’ve wanted to own. There were a number of Porsche’s, lots of Lotuses and quite a few TVRs.

Interesting to see an increasing number of M-series TVRs being campaigned these days. I saw these being built during visits to the TVR factory in Blackpool in the late ’70s.

My all-time favourite TVR is the Griffith. With a chunky 4.7L Ford V8 engine – these cars always provide good on-track entertainment and a fabulous soundtrack of rumbling V8 power.

Unfortunately – the big touring car race was scheduled for Sunday so not many of the field were out on display on the Saturday. Never mind – there’s always next year!

The great thing about these historic car events is snooping around the cars that fellow enthusiasts turn-up in is almost as interesting as what is competing on-track.

A lovely Lotus Elite caught my eye. These beautiful little cars are worth quite a lot of money these days but for good reason. Restoration of their fibreglass monocoque bodies with bonded-in but rust prone metal strengthening sections is not cheap. Rebuilding their Coventry Climax engines can also be a labour of love.

The lightweight Aston Martin DB4 in the BRDC members car park looked fantastic. This particular car started life as a road car before being converted to historic racing use. It then clocked-up many race wins in the UK and the USA in the hands of some famous drivers. A beautiful but purposeful car.

The little rally prepared and fat-wheel-arched Lancia Fulvia 1.3S was lovely although it did look a little intimidated alongside the rather more heavy-metal Mustang.

As a Porsche man it’s hard for me to admit liking any Ferrari model but in the interest of burying all the bad news in one fell swoop:-

I rationalise liking the BB512 through the fact that it has a mid mounted flat-12 boxer engine (a la Porsche 917 but in this case water-cooled) and through the unassailable fact that it looks stunning. Its road hugging Pininfarina lines are cunningly enhanced by the classic combination of red upper body colour with contrasting black for the lower body which creates the optical illusion of it being lowered.