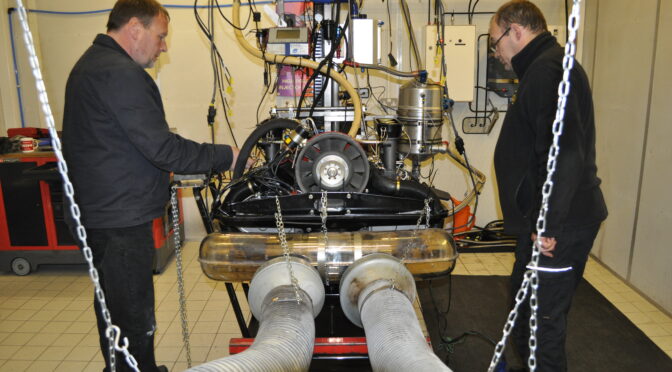 I called Jaz on Mon 3rd Feb and got the great news that, at long last, my engine was being run-in on the dyno at BS Motorsport.

Earlier, Steve had temporarily given up on his fight to bore out the mis-matched 2.0L inlet manifold to 2.2S spec. However, through a fortunate and timely parts swap, he got hold of a proper matching 2.2S manifold to stick on the engine which enabled dyno testing  to go ahead.

Steve had delivered the finally complete engine to Neil Bainbridge (who heads-up BS Motorsport) a couple of weeks previously, but we had to wait patiently for Neil to return from his annual pilgrimage to Daytona and then for him to then catch up on a backlog of other engine jobs.

With running-in under way – I arranged to meet Steve at the dyno the following evening (Tue 4th Feb) to discuss the running-in results with him and Neil and to observe adjustments and further power runs to optimise engine set-up and performance.

On the drive out from Central London to the dyno in Westcott, Buckinghamshire my excitement turned to mild panic when my satnav decided to direct me in ever decreasing circles around the Southern perimeter of the industrial estate where BS Motorsports is located instead of taking me directly to entrance gate. (Neil later informed me this is a known issue as satnavs try to direct their hapless drivers to an entry point to the site that no longer exists!)

Fortunately Steve hadn’t arrived yet so I’d not missed anything and over a welcome coffee and cake, Neil was able to give me the low-down on initial engine fire-up, the running-in procedure and the power runs he’d already carried out.

In the comfort of the dyno control room Neil ran me through the output from previous runs and fired up the engine to show me how it’s done. Edited highlights were as follows:-

When Steve arrived,  Neil briefed him with results, read-outs and a range of baffling graphs before the pair of them agreed on the adjustments to be made and the sequence in which to tackle them:-

Over another cuppa, Neil and Steve had a chat about the results. Their conclusions were that although power was not massively  above the 180bhp for a “standard” 2.2S there was a massive  improvement in torque and most especially in the torque curve. Steve emphasised that this should provide great driveability – the most important factor for a road car.

They went on to explain that whilst another 8-10 bhp could possibly be eked out through valve and cam timing adjustments these would probably be detrimental to overall torque. Not an issue in race applications as revs are kept high but for a road car – torque is much more important.

The only remaining tweak was to check and if necessary adjust the  weights and springs in the distributor. This was a job that Neil would tackle the following day before unplugging the engine from the dyno to make way for the next in his long queue of customer engines to be sorted.

As an aside – Steve was particularly interested in the prospect of observing a 935 engine due to be on the dyno the following week. It was pretty clear that Neil was also relishing the prospect when he commented that “we might switch the lights off for that one!” ……. to watch those enormous twin turbos glowing in the dark! I’ll be keen to see the video of this.

I spent three fascinating hours trying to follow Neil and Steve’s meticulous technical analysis of results and read-outs, followed by their  ideas and recommendations on how to optimise engine performance. It was a real privilege to watch their methodical approach in trying out their theories and witness the immediate effects of their adjustments. I came away extremely pleased with the experience and very satisfied with the results.

Although on paper dyno testing of a newly rebuilt engine looks pricey (especially after the expenditure of the rebuild) – it’s actually  the most sensible and cost-effective approach.

As Steve pointed out – the total labour cost of sticking a newly rebuilt engine back into a car and following the “conventional” running-in process including multiple visits back to the garage to try out various ideas and adjustments very quickly exceeds the cost of the dyno approach. There’s also the further benefit that the 1st service of the engine can be carried out whilst it’s still plugged into the dyno. I’d strongly recommend the dyno approach and for sorting out any Porsche engines and look no further than Neil Bainbridge at BS Motorsport to do the sorting.

I hope to add some of the graphs and readouts from the dyno process as soon I get them from Neil and, hopefully, I’ll be able to include a video clip of one of the later engine power runs as the noise it made was just great .