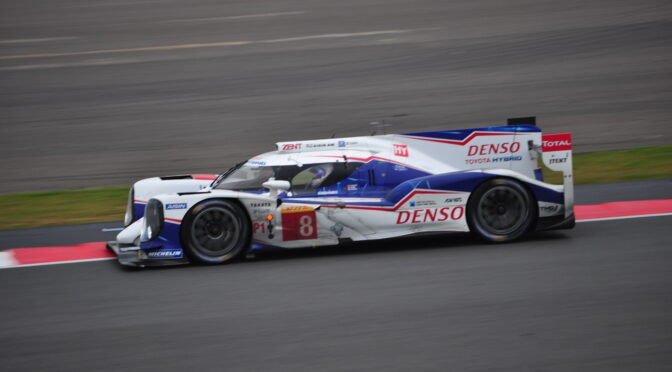 I woke up knackered after a long and bloody freezing day out the previous day at Silverstone (Sun 20th Apr) for the 1st round in the 2014 WEC.

Lashings of coffee set-up me and the brother-in-law to watch  the BBC iPlayer highlights of the Chinese Grand Prix. After not too many minutes into it however – I became excruciatingly bored watching the procession of cars with precious little overtaking action. After losing interest completely I wandered off to look at my piccies from the Silverstone WEC race.

What I ask you is the point in fighting to see whatever snippets of non-live televised F1 boredom the BBC has to offer when for a relative pittance you can get yourself off the sofa and out of the house to watch the most brilliant races within a race at the WEC at Silverstone or other venues in the WEC programme. The sight and sound of LMP1 and indeed LMP2 cars repeatedly scything their way through the non-too-slow field of LMGTE cars is truly awesome with inter and intra class battles unfolding all of the time.

The end result of the inaugural 2014 WEC race (a bit early due to bad light and increasingly heavy rain) was also interesting with Toyota taking 1st and 2nd and Porsche 3rd after both Audi R18 cars crashed out.

Stuff F1 – from now on in I’m going to focus on the new breed of endurance cars – well I would if the media took a blind bit of interest in televising and/or reporting on it!

To The Race We Go

The brother-in-law and I set off early for Silverstone from London in order to take advantage of the special Porsche infield parking adjacent to the Snoozebox and conveniently close to the Village Corner Grandstand.

All bode well as all of the traffic lights on our way out of London were set to Green. Arriving at Silverstone in what seemed like next-to-no-time we were efficiently ushered by marshals and PCGB volunteers to the dedicated Porsche parking area.

After a quick walkabout around the National paddock to have a close up squint at the F3 cars – we hopped on a shuttle bus down to the International paddock and The Wing for a snoop around and to watch some of the F3 race from the banking on Club Corner.

We spotted Derek Bell in the paddock whilst he visitied the Porsche LMP1 pits before starting his official role for the day as the Grand Marshal of the 6 Hours of Silverstone. This was nice and highly appropriate as the last time I recollect seeing him at Silverstone was when he was racing a 956 for Porsche alongside Stefan Bellof in 1983!

We then joined the massive queue for the Pit Walkabout & Autograph session ahead of the main event. As the pit lane was opened to the public we managed to get a reasonably close up look through a few of  the open but cordoned-off garage entrances. We then came to a complete halt due to the massive log-jam of people gathered outside the Porsche LMP1 garage to get a glimpse of the new endurance racing main attraction – Mark Webber and of course the new Porsche 919 Hybrid.

The Pit Lane Walk was a nice idea but didn’t work too well with such a massive concentration of people around one garage. It’s all Mark Webber’s fault – that’s what happens when a nice and very popular bloke leaves the F1 yawnathon to take up proper racing in an LMP1 Porsche!

Not sure if all of the adoring fans remembered that in his youth – Webber had raced in endurance before but packed it in after a couple of “flights” on the Mulsanne Straight courtesy of the poor aerodynamics of his Mercedes race car. He swore he’d never race at Le Mans again as it was too dangerous.! I think everyone’s glad that he’s changed his mind!

We parked ourselves in the grandstand at Village Corner for the start of the race as this gave a good view of cars hairing into Village and around the tight Loop and Aintree Corners before belting hell for leather down the straight towards Woodcote.

The race kicked off on time with a thunderous rolling start. I’m pleased to report that unlike F1 – there been no diminution in decibels with the move towards hybrid and energy recovery technology in the LMP1 cars. In fact – a wide range of aural delights were on offer from the cars whanging round the track – ranging from the raucous sounding Toyota LMP1 Hybrids through the screaming Ferraris to the  thumping V8 Astons with lots of other lovely sounding motors in-between.

The race got off to a frenetic pace with the pole sitting Toyotas driving hard and fast to keep the harrying Audi’s at bay. The Kristensen, Di Grassi, Duval Audi was an early casualty of trying to fight past (and stay past) the Toyotas as it crashed out of the chase. They somehow managed to get the Audi back to pits minus most of its front bodywork but attempted repairs proved pointless when they realised the monocoque was cracked.

Even without the benefit of nearby audible commentary on the circuit loudspeakers – it was blatantly apparent to us that the Toyota’s were really dominating the race.

I have to say that visually – the Toyotas really are pig-ugly but you can’t argue with their potency at this early stage of the WEC campaign. The snub-nosed appearance of the Toyotas (and to a lesser extent  the 919 Porsches) remind me of the A/B/C type Auto Union cars of the late 1930s – decidedly-not pretty but powerful, purposeful and effective.

The surprising exit of both Audi’s – one very early in the race and the other much later resulting in a 20 minute safety car stint after it crashed out was complemented by the exit of one of the Porsche 919s (hydraulic problem). To my mind – the retirement of one 919 was excusable (to me if not Porsche) given that it’s a brand new car after years away from LMP1 but for not one but two Audis to crash out in the same race? However early in the season – this was astonishing given their normally almost monotonous reliability!

Setting aside the top level LMP1 cars – the pair of Rebellion cars in the LMP1 Lightweight category looked and sounded fantastic. They initially screamed around in tandem as if joined by an umbilical cord but after the No. 13 car disappeared the No. 12 driven by Nicolas Prost, Nick Heidfeld and Mathias Beche continued to belt around the circuit and achieve a very well deserved 4th place overall.

The G-Drive Morgan Nissan meanwhile was the outstanding performer in LMP2 ahead of the Oreca 03 Nissan cars.

In the LMGTE Pro class the Porsche Team Manthey 911 RSRs were mightily impressive especially when circulating in close convoy with Aston Martin hard on their heels. In LMGTE Am the Astons also out-performed the Ferrari F458 Italias and the 911 RSR and GT3 RSR in the same class.

After 17:00 the sky got darker by the minute and the rain got heavier. The Safety Car was deployed and as the cars slithered and slid around the track behind it in worsening conditions it was inevitable that the waving yellow flags would be swapped for red ones to mark the early end to what had been a fascinating and exciting race.

Toyota No. 8 driven by Anthony Davidson, Nicolas Lapierre and Sebastian Buemi was victorious followed by the No. 7 Toyota driven by Alexander Wurz, Stephane Sarrazin

With no Audi’s finishing – it was great to see Porsche secure their 1st podium place (albeit in third position) on their return to LMP1 with the car driven by Timo Bernhard, Mark Webber and Brendon Hartley.

The end of the race was the presage to a rain deluge of biblical proportions. Trying to find our way out of the circuit and make our way to the M1 Motorway in the 911 during what felt like a scene from Noah was pretty scary.

This was followed by a slow crawl South trying very hard to keep my little car out of-the-way of juggernauts, buses and mentally fast (given the conditions) car drivers. The reason for the crawl became apparent as we drove past a couple of crashed cars on the hard shoulder presumably caused by aquaplaning through the deep puddles on that part of the motorway.

Finally getting back into London was a great relief but I might have put my brother-in-law off motor racing for life after inflicting 2 freezing trips on him to Silverstone (an AMOC Club race and the WEC) during his visit from Tokyo!

Seriously – I cannot understand the following:-

I’m well and truly hooked again on endurance racing. Next stop – Le Mans in June (after the Donington and Brands Hatch Historic Festivals at the beginning and end of May)!