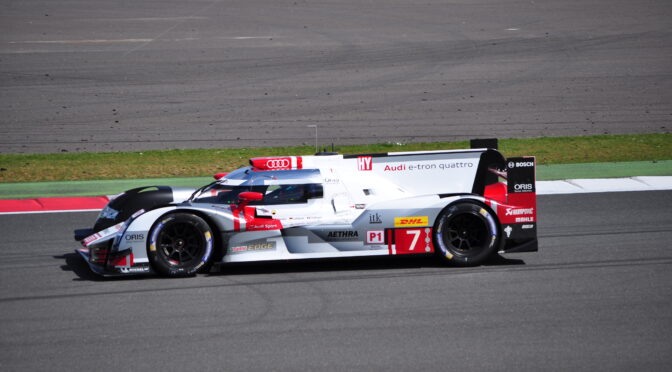 Despite somewhat chilly April weather – the opening round of the 2015 WEC at Silverstone was an event not to be missed.

The field of cars seemed smaller than last year but it offered (and delivered) the opportunity to see some great racing.

Audi were the ultimate victors this year with their No. 7 R18 E-tron Quattro driven by Andre Lotterer, Benoit Treluyer and Marcel Fassler but Porsche came a very close 2nd with their No. 18 919 Hybrid driven by Neel Jani, Marc Lieb and Romain Dumas. Toyota completed the LPM1 podium with their No. 1 car driven by Sebastien Buemi, Anthony Davidson and Kazuki Nakajima.

The sound of engines being revved on the start line of the Formula 3 race greeted us as we arrived at Silverstone on a bright and sunny April morning. My friend Stan and I hopped on the shuttle bus round to the International Paddock behind the Wing with the aim of joining the queue for the Pit Lane Walk ahead of the 6 hour race.

Unfortunately – we were quickly advised by officials that entry to the Pit Walk was restricted this year to the holders of the first couple of thousand tickets purchased. This was a real shame but not entirely surprising after the massively overcrowded experience of last year.

This left the morning a bit flat in terms of spectacle so we headed back to the National Paddock in search of something interesting.

Pausing briefly to inspect a couple of casualties from the F3 race we wandered into the paddock and immediately came across a lovely but somewhat incongruous Austin 7 parked up alongside one of the hi-tech race support trucks.

As we inspected this great old motor – the side door of the truck opened and out popped the enthusiastic Austin 7 owner who then opened up the bonnet and delighted in telling us all about his treasured car and how it provides a haven of grounded sanity from his heady world of top flight race car preparation & support.

The car was in original unrestored  running condition with bucket loads of patina. The owner explained that although he lived near Silverstone – his job took him to Derby on a daily basis and this wasn’t really a viable commute in an old 7 but with his team racing at Silverstone it was the ideal opportunity to use it.

I take my hat off to the owner – this must have been the oldest car at the event but to my mind – one of the best.

Sadly my 911 was away having having some new carpets fitted so unlike last year – I wasn’t able to park it in the Porsche Club GB infield parking zone.

Stan and I decided to have quick look at what was on show before parking ourselves in Village Stand to watch the start of the race.

Although some some nice cars had turned up – the earliest car I could find was a 2.7RS. I really thought there might have been at least a couple of pre-73 cars but there you go. I obviously let the side down in not bringing my 911.

Stan and I parked ourselves in the Village Stand overlooking Village Corner, The Loop and Aintree Corner for the start of the race. This stand provides a good vantage point to see the cars negotiating the tight corners before they hoof it down the Wellington Straight.

We witnessed some occasionally frenetic avoiding action by GTE and even LMP2 drivers as LMP1 cars came barreling towards them into the bendy bits. It was mightily impressive to see the Porsche, Audi and Toyota cars slingshot away from the other much slower cars around of them as the straight hove into view.

The race commentators briefly debated what seems to be an increased disparity in outright speed between LMP1 cars and the rest of the field as a result of what seems to have been a much more productive period of development for LMP1 cars over the Winter months.

Porsche got off to a great start with the No. 17 car driven by Webber streaking ahead to establish a decent 10 second lead over the sister No. 18 Porsche and over chasing Audi and Toyota cars.

Audi and Toyota were however in hot pursuit and never far enough away to make life completely comfortable for Porsche.

Sadly Webber’s promising start came to an abrupt end after 80 minutes of racing when an unscheduled pitstop turned into retirement due to a rear drive-train problem. This left the No. 18 car to fly the Porsche flag.

Over enthusiastic driving in what were difficult blustery conditions led to a couple of off track excursions and this provided spectators with  a chance to see the new FIA Full Course Yellow Flag procedure in action.

In essence – this is a well co-ordinated procedure in which yellow flags are waved all around the track at the same time indicating a dangerous incident and forcing ALL cars to slow down immediately to 80 kph and to maintain track position.

When the incident is cleared then waved yellow flags are replaced by waved green and ALL cars can resume racing. This replaces the less immediate and more long, drawn out safety car procedure which can be extremely disadvantageous to cars which have built up a lead to their rivals only to loose it as cars bunch up behind the safety car.

My verdict is that the new procedure works well and is better for drivers and spectators alike by enabling faster reaction to and faster recovery from incidents thereby maximising race time. It also adds an interesting dimension in terms of  the need for increased driver vigilance in reacting to the green flag. Sebastien Buemi was an early victim of this when he reacted much more slowly to the green flag than the 2 Audis behind resulting in the loss of 2 track places to the Audis!

There is a school of thought that modern endurance racing is too sanitised and that it has lost the raw aggression of earlier years.

No so in this race. From around lap 56 – Neel Jani was involved in a titanic battle with Marcel Fassler in the No. 7 Audi with the the other Audi and the two Toyotas not far behind.

For lap after lap Jani and Fassler swapped places as they each exploited the relative strengths of their respective cars. The Audi was able to brake later and negotiate the twisty bits much better than the Porsche but the Porsche was able to regain the lead by out-dragging the Audi on the straights.

Both drivers clearly enjoyed the battle and they showed immense respect and fairness in the way that they allowed passing manouvers without any blocking or weaving silliness.

Fight To The End

Pit stops later in the race enabled Toyota No. 1 driven by Anthony Davidson to take the lead followed by the No. 2 Toyota but Audi tactically opted to place Andre Lotterer into the No. 7 car for a flying triple stint to reel-in the Toyotas and take the lead position. Porsche also chased to get back up to 2nd position but as the final hour approached Audi No. 7 seemed to be in an unassailable 72 second lead.

Fate then played a hand when Audi No. 7 was given a stop/go penalty of a track infringement but this had to be preceded by a separate splash and dash fuel stop so over the course of just 2 laps the Audi lead was reduced to just 11 seconds.

Ironically this set the scene for a re-run of the Fassler/Jani battle as the Porsche started to eat into the lead but Jani ran out of time when the race came to an end and he crossed the line just 4.6 seconds behind Fassler. The No. 1 Toyota took 3rd place just a further few seconds back.

It was a fantastically entertaining and close race which bodes well for the rest of the season especially as more cars join the fray.