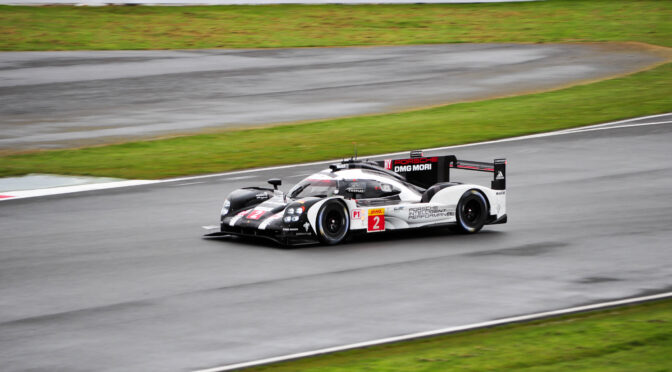 What a difference a day makes. The WEC weekend started off with snow and sleet on Saturday but Sunday brought glorious sunshine even though it was still a bit chilly.

The WEC 6 Hour Race was obviously the main event of the weekend. The 2016 WEC season opener and chance to really see what development has been successfully carried out by the teams over the Winter break.

Whilst qualifying provided an indication of top speed and relative handling capabilities – endurance race cars and drivers can only prove themselves in race conditions i.e. over several hours and with all classes of cars out on track simultaneously.

WEC qualifying took place around Saturday lunchtime across two all too brief 20 minute sessions – the first was for the LMGTE Pro & LMGTE Am cars and the second was or the LMP1 and LMP2 cars.

My interest was really focussed in the second of the two sessions for the LMP cars and this offered the first opportunity to gauge what the headline LMP1 teams had been up to over the Winter break.

For Audi and Toyota this was the debut of their brand new 2016 cars whereas Porsche were fielding what is essentially an enhanced 2015 919 Hybrid car. On paper at least – one would have put money on Porsche having the more fully sorted car with the brand new cars hoping simply to iron out teething troubles and refine their settings.

Audi however had other ideas and surprised everyone (most especially Porsche) by qualifying their cars in 1st and 2nd positions for the race with Porsche taking 3rd and 4th positions. Toyota had a fairly torrid time during qualification with their new car as they failed to find the “Bloody Freezing” setting for their cars.

“Deploy the Duracells” doesn’t have quite the same ring to it as “Put The Hammer Down or “Pedal To The Metal” but when the LMP1 Hybrids switch on their harvested hybrid power it really is like Warp Drive as they fly out of bends making the cars they pass look like they are in reverse gear.

Getting up close to the WEC cars was only possible for me on the Saturday as race day pit walk is now a ticketed event and I left it too late to obtain tickets. Wandering around the front of the International pits gave some fascinating insight into the mechanical complexities of the race cars.

Unlike pit garages of old – the WEC pits are more like hospital operating theatres with their overhead lighting panels, meticulously laid out tools and teams of surgeon engineers milling around the deconstructed cars. The fuelling rigs could also be mistaken for sources of air or anaesthetic gas.

Stripped of their removable bodywork – the LMP monocoques with their open vestigial doors were sticking out like the stubby robotic of an insect ready to fly.

Last year’s WEC race at Silverstone was an incredibly tight affair with Audi and Porsche often swapping the lead several times per lap due to the better corner handling of the Audi against the faster acceleration and top speed of the Porsche.

In clinching 1st and 2nd places on the start grid for this years race – Audi had however demonstrated that they had addressed the acceleration and speed difference over the Winter.

As the race started – Andre Lotterer in Audi R18 No. 7 sprinted away with the No. 8 car in rapid pursuit – the pair of them obviously hell bent on building up a sustainable lead over the Porsche 919s.

Mark Webber in Porsche 919 No. 1 had other ideas however and he soon reeled-in the Audi’s to take the lead. Unfortunately Romain Dumas in the No. 2 Porsche couldn’t follow suit as he hit some technical issues and made contact with a Ford GT.

At the first round of pit stops it was all change for the Porsche driver line up whilst Audi stuck with their starting driver line-up.

Up-front Brendon Hartley in Porsche 919 No. 1 built upon the lead established by Mark Webber and really seemed to be flying towards an unassailable lead until he miscalculated an overtaking manoeuver at Village and collided with the Gulf Porsche 911 RSR driven by Michael Wainwright. The high speed collision sent the 919 up onto its side as it slid off the track but fortunately for Hartley the momentum and contact of the closely following 911 prevented the 919 from rolling right over.

For an observing Porsche fan – this crash was massively disappointing but the situation was balanced out to a degree by the fact that Audi No. 8 suddenly broke down right next to the crash site.

All efforts to re-start the Audi failed and when the fire extinguisher system deployed it was clear that it had to go through the rather protracted hybrid system shut down procedure prior to the car being lifted off the track and the full course yellow status being lifted.

Some further drama followed later when a The Toyota TS050 – Hybrid No. 5 had a rear puncture on the Wellington Straight whilst being driven by Kazuki Nakajima. Unfortunately Nakajima drove the car a little too quickly in his haste to get back round to the pits and the punctured tyre exploded causing big shards of rubber to destroy the rear quarter bodywork. Fragments of carbon fibre bodywork large and small were liberally distributed over the track forcing the safety car to come out to enable track marshal to sweep up the mess.

Nakajima continued his limp back to the pits pausing briefly on the grass at Becketts before being told by the marshals to continue. This incident put Toyota No. 5 out of contention for a lead place.

Romain Dumas, Neel Jani & Marc Lieb in the No. 2 Porsche 919 did their level best to catch and overtake the Audi R18 No. 7 of Marcel Fassler, Andre Lotterer and Benoit Treluyer. They came close but never quite managed it and the lack of safety cars and full course yellow late in the race forced the Porsche to make a very late splash and dash stop which put them completely out of contention in terms of winning the race…………………or so they thought.

Despite the fact that the Audi crossed the finish line in first position – post-race scrutineering detected a rule infringement in the form of the car’s skid plate being too thin so it was disqualified and Porsche 919 No. 2 was promoted to first place.

The adjusted results were as follows:-

WEC Weekend As A Whole

Travelling up from London 2 days running wasn’t too bad really as amazingly the M1 was reasonably free flowing.

An expectation of  cold and mixed weather conditions at Silverstone is rarely disappointed but this year was even more extreme than normal.

Not that I needed any more convincing but the racing I saw over two days absolutely confirmed that Endurance Racing is an infinitely more interesting and exciting spectacle than F1. I no longer bother following F1 as it’s just one daft rule change after another and it is just a dull tactical procession with no flat-out racing.

Rather tellingly in the WEC Programme – Mark Webber commented on the fact that as an Endurance racing driver he can now race flat out as this opportunity was taken away from him in the last part of his F1 career due to the silly Pirelli tyres made out of paper-mache and because of fuel and other restrictions.

Tis is really strange as WEC has increasingly rigorous fuel efficiency targets and lots of other rules and regulations but none of these prevent the cars from being raced flat-out. The people managing F1 just don’t seem to get it and they are already seeing the fan base walk away towards more interesting and exciting forms of racing. What will be F1’s loss will be WEC’s gain in terms of the fan base!

The FIA WECs intended aim is to provide  a “Spirit of Le Mans” experience at circuits other than Le Mans and its fair to say they are going a long way to achieving this. They field great cars with superb drivers from various racing disciplines who want to drive race cars as they should be driven – as quickly as possible. What’s not to like about this approach?