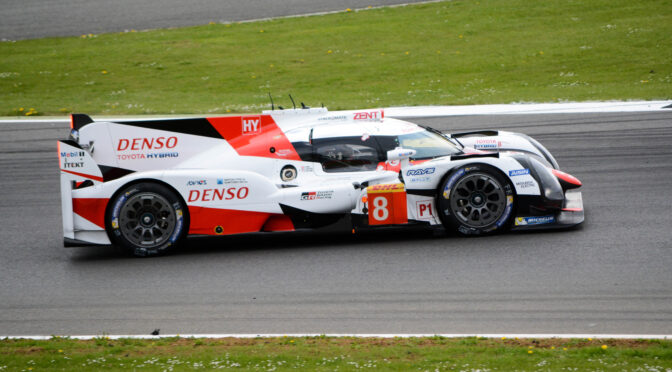 For the Endurance Racing Experience to really work – fans have to share the endurance challenge in some way in order to legitimately bask in the triumph of their achievement alongside that of their driving heroes.

At Le Mans – the fans challenge is staying awake for as much of the 24 hour race as possible. There’s also the equally difficult challenge of remaining just sober enough to work out which car whanged past at well over 100 decibels. NB: Working out relative positions of cars in a 24 hour race is a pointless task and should not be attempted for fear of confusion.

At Silverstone in April – the challenge is entirely thermal.

However many layers you wear (up to and including full Michelin Man stature) the invariably chilly weather at Silverstone numbs you to the bone. Forget alcohol – you are limited to the OAP survival technique of regularly imbibing warm fluids to stave off frostbite and hypothermia.

As and when scientists successfully clone Woolley Mammoths  from the increasing plethora of well preserved remains emerging from melting Siberian permafrost – I know the perfect environment in which they can prosper – the frozen tundra of Silverstone!

I had a further challenge on Sunday when my Mrs valiantly volunteered to join me for the 6-hour race when a friend and then another friend dropped out at short notice. Just to be clear – my Mrs doesn’t do cold and she also rarely does a trip in my old 911 – citing excessive engine noise, suspension induced discombobulation, obnoxious oil/petrol fumes and having to spend too much time in close proximity to a car anorak (me) as her main issues.

Thankfully – Saturday’s experience enabled me to formulate a plan for Sunday which revolved around plying the Mrs with free hot coffee at the PCGB tent upon arrival and then ensconcing her on a comfy beanbag in front of the large screen televising the day’s live racing action in the cosy, warmth of the public hall in The Wing – just above the pits and the start/finish straight. Job done, divorce averted……………………….for now!

At Porsche related racing events such as the Silverstone WEC – PCGB offer a haven of tented shelter from the cold to their members. At Silverstone – this includes reserved parking for Porsche models new and old along a stretch of the old circuit.

It’s always good to see Porsche’s gathered together in significant numbers but I have to say that with a few stalwart exceptions, there were precious-few older models on display. Not sure if their owners are too busy watching the values of their cars rise or whether they are just waiting for higher temperatures before venturing out.

Thankfully – the few older cars that did turn up were given pride of parking place right next to the PCGB tent. This also made it easier for a number of filmed and photographed interviews to be conducted with the owners of these older cars. Drive Tribe interviewed a few of us to be followed by PCGB TV. Oooh errr – fame at last ……….. for the car at least!

The Silverstone Porsche Centre very kindly set up a shuttle bus to allow PCGB members to enjoy the centre on Saturday. This included the opportunity to be driven around their excellent test track in a top of the range Panamera by a professional driver.

My friend and colleague Sheila joined me on Saturday and as we waited our turn for a chauffeured trip around the test track – I recognised one of the drivers of the two cars in use. It was none other than Richard Atwood who with Hans Herrmann achieved the first outright Porsche victory for Porsche at Le Mans in 1970 in the awesome Porsche 917K.

We opted to miss our slot to wait for Mr Attwood and I’m so happy we did. Almost oblivious to the car’s antics on the skid pan, kick plate and other sections of the test circuit – I chatted with Mr Attwood about the challenges of driving a 917, the merits of his ’69 911 company car, the prospects for Porsche 919’s winning the 2017 6 hours of Silverstone and other ephemera.

What a charming man. His insights into the 917 were particularly interesting as he explained how awful the early cars were and how they gradually improved the car, particularly the aerodynamics to pave the way for his (and Hans Herrmann’s) 1970 victory at Le Mans in the Salzburg Racing 917K number 23.

He suggested I watch a helicopter video of Rolf Stommelen flat out on the Mulsanne in an early car which was weaving dramatically as he struggled to keep it on the road.

When I mentioned I had a ’71 911 – Mr Attwood was quick to state his approval, adding that he hoped I’d bought it before prices went mad. He went on to say how much he enjoyed driving his ’69 911S  company car whilst driving for the Porsche factory team. He explained that he and other factory drivers were expected to drive these cars to and from the European events in which they were competing in order to advertise and promote the brand.

In response I mentioned that Graham Hill as a director of the Speedwell A-Series engine tuning firm followed the same directive and for a while drove a Speedwell supercharged Austin A35 to and from his European races. Brilliant!

This series featuring LPM2, LPM3 and GTE cars is great fun to watch and is no less exciting than the full-fat LMP1, LMP2, GTE WEC category.

From the start of Saturday’s 4 hour race – there were some extremely spirited drives to press home a lead, recover lost time from mechanical issues and exploit catch-up opportunities from safety car stints.

Nicolas Lapierre in the Dragonspeed Oreca 07 – Gibson was absolutely flying in the early part of the race. Such was his pace relative of the rest of the field – he started lapping it within just a few laps. Sadly his charge was impacted by mechanical troubles and car finished in 10th position overall.

The race ebbed and flowed throughout with the lead changing so many times. This is how racing should be – the complete opposite of the current processional and predictable F1 series.

The WEC 6 hour race was the main event for the weekend and an appetiser for the 2017 WEC season.

Sadly Audi decided very late in the day to withdraw their race team from the WEC when their 2017 car was two third’s complete. As a Porsche supporter one might expect me to welcome this but I think it degrades serious competition in the LMP1 category as it leaves just Porsche and Toyota with two factory cars each and privateer ByKolles with just one car.

Richard Attwood had tipped me off that  Toyota looked favourites to win the 6-hour race thanks to their high downforce aero package when compared to Porsche’s low downforce package (to emulate Le Mans conditions).

Stonking pace by Toyota during qualification on Saturday to secure the front row on the starting grid seemed to support Mr Attwood’s view but race conditions can be quite different.

When the race kicked off at 12:00 midday on Sunday the Toyotas did  indeed look unassailable but the Porsche 919 Hybrid cars were only 5 seconds behind. This was a much smaller gap that some anticipated and it offered the exciting prospect of serious competition between the two marques later in the race – especially if rain and/or safety car periods intervened.

Number 7 Toyota suffered a horrendous crash around three quarters into the 6 hours race when Argentinian – Jose Maria Lopez got a wheel onto the kerb causing his car to shoot straight off the track, across the gravel and head-on into the tyre wall at around 100mph.

The front of the car was destroyed but thankfully Lopez was conscious. His efforts to restart and move the car were initially fruitless and the car had to be lifted out of the gravel onto more firm ground. Miraculously – he was then able to re-start the car and limp back to the pits with bodywork, wiring looms and mechanical components dropping off as he went on his way.

Lopez was whisked off to hospital for obligatory checks from such a high G-force crash whilst an army of Toyota mechanics (at least 15 of them) frantically stripped what remained of the front of the car and replaced everything ahead of the windscreen to get the car back out on track within one hour. Truly astonishing!

During the last hour of the race – excitement mounted as the lead changed from Toyota, to Porsche and finally back again to Toyota thanks to Sebastien Buemi’s spirited drive to exploit every last ounce of his Toyota’s high downforce set-up leaving Brendon Hartley unable to match his pace in the Porsche 919.

A great race that bodes well for the remainder of the WEC season.