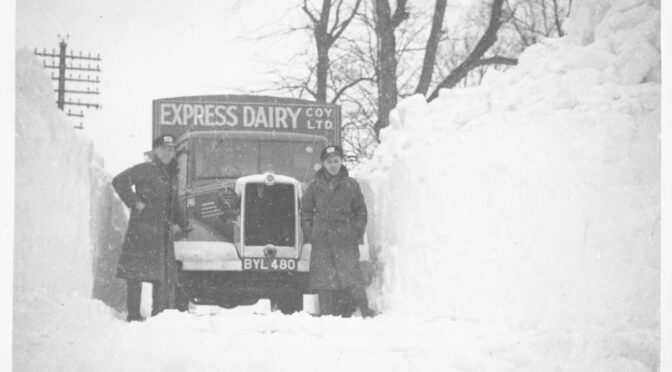 The winter months present something of a challenge to British motoring enthusiasts as it’s a motoring Dead Zone as far as races and classic car jaunts are concerned due to the poor weather and lack of daylight.

To counter the debilitating effects of this affliction it’s important to reflect on the past year’s motoring highlights and to start planning for petrolicious pleasures in the year to come.

It also allows time to muse over the improvements you’ve managed to make to your classic car over the past year and fantasise over other reassuringly expensive ways of further improving its performance or looks.

NB: The featured image shows my Dad (on the left) and his colleague in the late 1940s just after they’d dug their way through a truck-high snow drift on their daily round to collect milk churns from remote farms around Appleby, Cumbria.

2015 was a busy year for me in terms of the number and variety of car events I visited . Here’s a reflective summary:-

The traditionally dead month of January actually brought 2 events in 2015 in the form of the London Classic Car Show and an open day at the new premises of Jaz Porsche in St Albans.

The London Classic Car Show was held in the Docklands Excel Exhibition Centre – easily accessible by tube and Docklands Light Railway. It turned out to be a quite enjoyable event with lots of nice machinery on display and the novel idea of a central space for cars to be seen and heard albeit somewhat slowly on the move.

“So what?” you might say but the therapeutic effects of hearing the engine of a historic F1 car being revved in a confined space as it circulated around the central exhibition space are not to be underestimated.

Late January brought an invitation to the Jaz Porsche Open Day – an opportunity for Steve and Claire Winter and their team to show off their new premises. The benefits of moving from their cramped unit in the shadow of the Wembley Stadium to newer and larger premises on the outskirts of St Albans were obvious from the large array of historic and classic Porsche’s on display on the floor and on ramps around the new garage.

Faithful Jaz customers turned out in force to mingle, chat and enjoy seeing and hearing a 356 Carrera GT, a race prepared 911 ST and a host of other great Porsches. Steve and Claire’s business has been boosted by the move which is well deserved for such a professional and knowledgeable Classic Porsche specialist.

April brought the first full-on race of season for me in the form of the opening round of the World Endurance Championship – the 6 Hours of Silverstone.

Despite the bone-jarringly-cold conditions – the spectators were presented with a titanic battle between Audi and Porsche right up until the last minute of the race. Audi finally triumphed on the day but the straight line speed advantage of the Porsche 919 bode well for Le Mans in June where Porsche secured their 17th outright win of the event and also championship victory secured at the last event of the for the season.

May brought the wonderful Donington Historic Festival. This friendly and accessible event improves year on year and thankfully this seems to be reflected by increased attendance despite the sometimes inclement May weather.

Car clubs are well catered for by dedicated in-field parking zones, many offering great vantage points for watching on-track action. The packed paddock is also a great highlight – allowing you superb access to the cars and the people preparing and driving them.

Later in May – I finally attended my first hill climb event at Prescott – home to the Bugatti Owners Club. As well as  the massive turn-out of Bugattis – I was astonished by the diverse range of other vintage, classic and modern machinery both on display in the paddock and battling it out on the hill.

Due to the sheer range of participating cars – I covered the event with two posts – Prescott Hill Climb and a second post reflecting the the French theme of the day – La vie en bleu.

I wasn’t sure if I’d get to Silverstone Classic 2015 but I eventually decided to combine my visit with a bit of voluntary assistance marshalling car parking for Porsche Club GB.  The dedicated PCGB parking area just near the bridge across the circuit to the infield meant I was at the heart of a plethora of club displays with access to the old paddock at one end of the circuit and the International Pits and Paddock at the other.

There were some great cars on show and out on track but the traditionally fickle Silverstone weather veered from torrential rain on Friday’s main practice/qualifying day to bright sunshine on the Saturday and back to heavy rain on the Sunday causing havoc to race grids and more than a few “racing incidents”.

My personal favourite event of the year has to be Classics At The Castle – the Pre ’73 Porsche event at Hedingham Castle.

This event has gone from strength to strength and it was enhanced last time round by the addition of a Classic Porsche Auction organised by Coys of Kensington.

The number and range of Classic Porsche’s attending this event is fantastic and it was great to see a growing continental presence including a great bunch of Dutch 356s.

Rather ironically – my 2.2L 911 was parked just behind the early 2.0L 911 of Ansgar a fellow 911 blogger who runs the excellent Teil der Machine Porsche Old-timer web site in Germany. I’d not linked up with Ansgar at that stage and it was only when Ansgar spotted his car on a photo on my web site that we connected. We’ll hopefully meet up at Hedingham this September!

NB: As an absolute barometer of popularity and accessibility – Hedingham is about the only motoring event that my wife enjoys attending!!! No better recommendation than that.

Later in the month – my mate Kirk suggested I join him at Kop Hill Climb, an event I’d heard of but had never before attended. What a great event. Although it is non-competitive – I was bowled over by the enthusiasm of the organisers and the participants (on 2, 3 and 4 wheels).

Kop Hill Climb has a fantastic heritage so it’s great to see it revived and the best news is that all of the proceeds from the event go to local charities.

The Aston Martin Owners Club Event at Silverstone in October is always a firm favourite of mine as it brings out some fantastic old Astons and a range of contemporary competition and more recent classics in a day of action packed racing.

Following on just one week after the AMOC event – it was the turn of the Historic Sports Car Club Event at Silverstone. As their last event of the season and the championship finals – it always guarantees some excitement but various thrills and spills during the day led to the last race kicking off at dusk with all drivers instructed to put their lights on for the race.

Whilst I felt sorry for the participants in the last race – it gave the spectators an impression of classic 24 hour races as darkness fell on Silverstone with the cars still whizzing round with headlights ablaze. Great fun!

The last day of October marked the annual gathering of veteran cars and other interesting motors for the Regent Street Motor Show in the heart of London’s West End. As a prelude to the London to Brighton Run a number of cars  are inevitably staunch regulars to the event but there is always something new and interesting to see and there are always details of particular veteran cars that you’ve previously not noticed.

One interesting car that turned up in 2015 was the first Isotta Fraschini which was donated to the Ford Museum in the USA by Benito Mussolini.

Actually using my 2.2L 1971 911 was my priority this year after it’s engine rebuild a while back. The car did however benefit from replacement of the dodgy plastic air box with a second hand refurbished metal item.

When this was fitted Steve at Jaz Porsche realised the air box cups onto which the air box clips were the incorrect carb spec ones. Consequently the long clips I had just didn’t fit. I’ve “borrowed” a couple of short clips from Steve’s 2.2S engine but my search for a set of short clips of my own has proved fruitless. It looks like short clips are no longer being produced and second hand ones cannot be had for love nor money!

I then went on the hunt for proper 2.2S air box cups (another hens teeth item) and my mate Kirk pointed me in the direction of Tom’s Rennshop in the USA. The deal was done and Tom despatched a pair of original 2.2S cups which Steve had blasted and powder coated before fitting them at the same time as my new distributor. I still need those short clips but at this rate I might need to have them specially made!

Since the engine rebuild – I’ve been temporarily using one of Steve’s race 2.0L distributors as he sent off my original 2.2L Bosch distributor to a specialist in the USA to have it fully refurbished and modified to enable me to take full advantage of Steve’s bespoke spec camshafts. This new dizzy was finally fitted and it’s made an enormous difference. The engine is now running much more sweetly and pulling much more powerfully.

There are still more brake-horses to be released once the problem of air leaking into the throttle bodies is fixed but more on that in my next post!