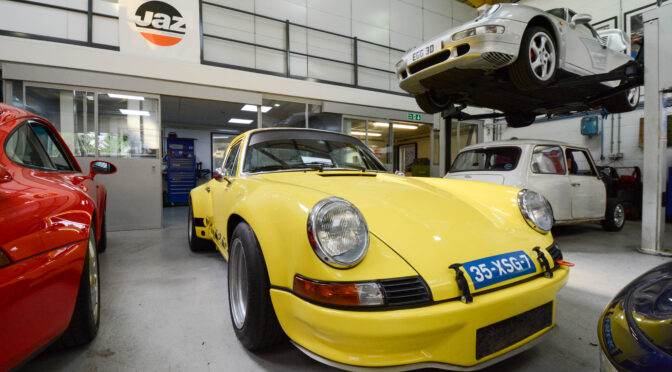 A Saturday morning visit to Jaz to sort out a sticky-choke induced misfire turned into a very pleasant morning despite the damp weather.

I’d explained to Steve that during a trip out to Sportwagen the previous day – a hesitancy to accelerate had started to affect the car and it had gotten worse during the course of the journey.

I managed to get back to London from Sportwagen OK but I was a little worried that it might turn out to be one of those annoying intermittent problems that go away as soon as you arrange to get them checked out.
Definitely not the case as the car was stuttering even worse on hard acceleration during the initial part of Saturday morning’s journey from North London to St Albans.  The problem eased off at motorway speeds on the M1 but reappeared as I peeled off for St Albans.
Upon arrival at Jaz – Steve opted to take my car for a test drive to assess what might be causing the hesitant acceleration. So with me as passenger – we headed off with others following to take-in a breakfast stop at a nearby St Albans deli.

Purely by chance I ended up starting two consecutive Saturdays with breakfast at the Smokehouse Deli in St Albans with Steve and his Porschephile friends. I have to say – it’s a very civilised way to start the day. Fine food and car chat in this instance followed by the return leg of the test drive back to the garage so not so much “Coffee & Cars” as “Full English & Full Throttle”!

Back At The Garage

The garage was packed to the gunnels with Porsche cars old and new, a smattering of motorbikes (and a Mini?).

It’s always lovely to see such concentration of precious metal.

Whilst steve moved cars around to make space to pull my car into the garage I was able to have a very pleasant chat with Fred Hampton – stalwart of the 356 community about his “new” Bent Screen 356.

Fred explained that after selling his beautiful and beloved 356 Carrera earlier in the year – he got the opportunity to liberate a very special Bent Screen Pre-A 356 from  a museum collection. As the car had stood so long in the collection – Steve had been tasked with replacing fuel lines, checking brakes  and carrying out other recommissioning checks and fixes to make the car roadworthy.

The car was resplendent in its lovely Graphite Grey paintwork with a hint of brown in the paint which made it  change colour as the light conditions altered.

The term “Bent Screen” is a literal description of shape of the front windscreen which has a visible ridge in the middle. This was an intermediate solution (introduced in 1952) between the original split screen of the earliest Porsche cars and the more gradually curved front screen of the 356A introduced in 1955.

The most incredible thing about Fred’s car is its originality – right down to it’s completely original interior and identification numbers including numbers etched on the back of the moon hub caps. A truly fantastic survivor.

Back To My Car

Steve dismantled the choke mechanism – a fairly crude but normally effective device which apparently looked ok but which received an extra  shim to discourage it from sticking open.
Once reassembled – Steve re-tuned the car and checked results on the gas analyser before a further test-drive to ensure all was well. I was then ready to blast back to London minus the misfire.
I think the car is in need of some serious driving after it’s long rest during its suspension upgrade. Old 911’s don’t thrive on lack of use!

In the course of my conversation with Fred we touched upon our respective origins – West Cumbria for me and Castleford in West Yorkshire for Fred. It turned out however that Fred had spent a number of years as a young child in a small boarding school in Lorton Hall in Cumbria – just a few miles from where I was born. Always nice to find a Cumbrian connection!