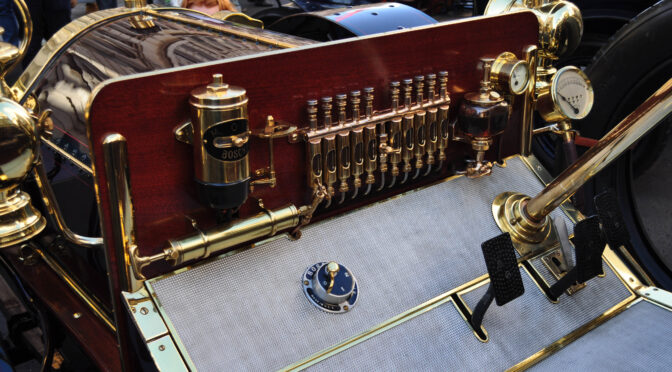 Following the tradition of the last few years many of the London to Brighton Veteran Cars were on display on the Saturday before Sunday’s Run in the Regent Street Motorshow.

It offers a great opportunity to get up close to these wonderful old cars and to chat to their owners/drivers but it’s no substitute for dragging yourself out of bed to get to Hyde Park before dawn to see the cars embarking on the run (See separate London to Brighton Post).

As far as I’m concerned – having Regent Street cordoned off from normal London traffic to display interesting cars should be a weekly event ! Given the crowds at this year’s Motorshow – it looks like I’m not alone in having that view. Note to self: Email Boris!

As well as the veteran cars there were also displays of more modern vehicles starting with herd of Mustangs at the Picadilly Circus end of the road. A lovely old Healey Silverstone was also parked up near to a couple of “modern” Morgans of the 3 and 4 wheel persuasion.

The very modern Infinity and Tesla displays left me a bit cold but there were vets-a-plenty further up the road to lighten my mood.

A Trip to the Vets

Close-up inspection of veteran cars  is fantastic. There are some great engineering delights to be discovered and explained in intimate detail by their proud owners.

Turning back towards Picadilly Circus to tackle the cars on ‘tother side of the street I was urged by some young ladies to enter a  flash shop selling fancy watches which had a Porsche 919 parked inside. It was nothing less than the Porsche 919 driven by Mark Webber (plus Timo Bernhard and Brendon Hartley) in this years Endurance Series. Having seen this and its sister car race at Silverstone and Le Mans it was nice to have a closer inspection.