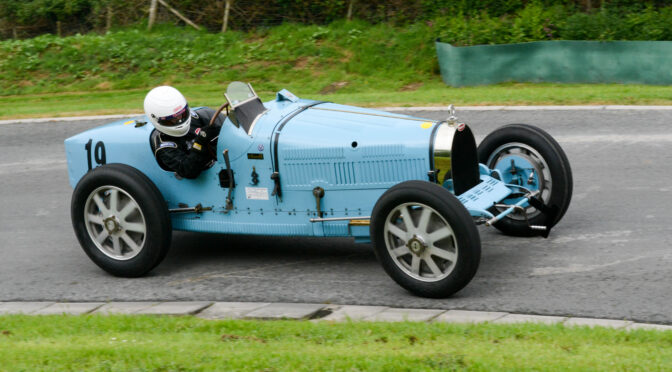 Purchasing  tickets for Prescott was something of a last minute decision – one which I started to regret when weather forecasts threatened dawn till dusk lightning storms.

Oh well – we’d never go anywhere in Britain if it was dependent upon uniformly good weather would we?

Getting out of London is always a challenge so the Mrs and I were out of the door and on the road in my old 911 before 8.

Heavy rain-laden skies and thick mist  followed by some slow motorists on the single roads weaving through the Cotswolds  prevented the Yellow Peril from fully stretching her legs but the engine was running sweetly so all was right with the world.

Mist and occasional drizzle persisted all the way until Prescott and upon arrival we had to find a parking place for the Peril in the rather full and slightly muddy Orchard.

We finally opted to annoy a local Sportscar Hire Firm by parking the 911 next to their Triumph TR6 and Lotus Elise hire cars forcing them to stick FOR HIRE signs in the windows of their cars to distinguish them from the MOST DEFINITELY NOT FOR HIRE bright yellow 1971 911! 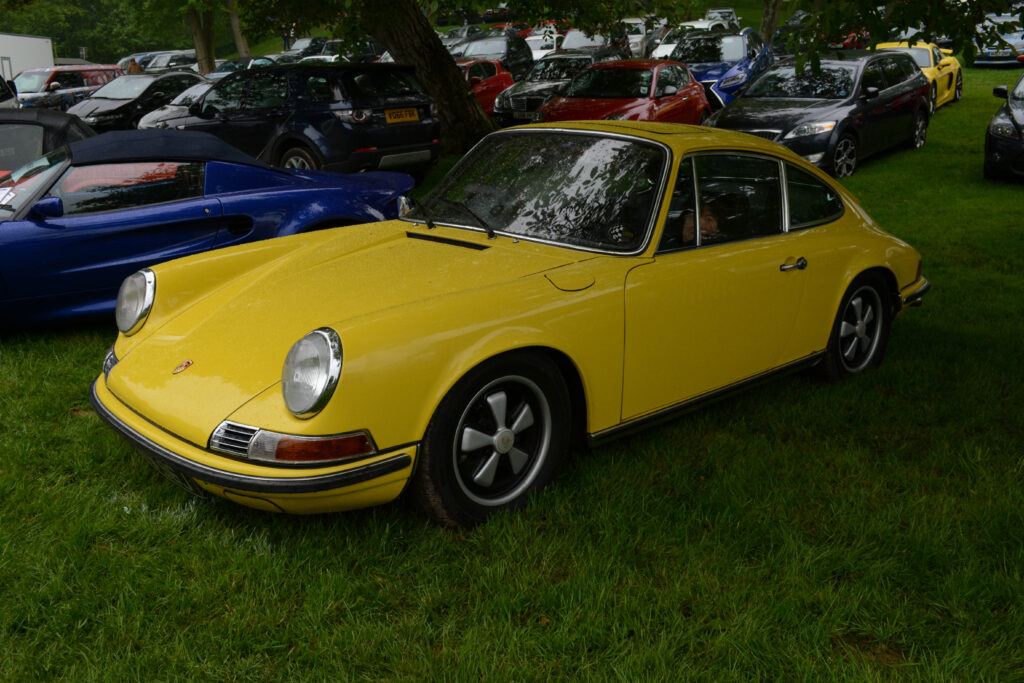 In The Paddock & On The Hill

Wandering across the footbridge into the paddock – the sweet smell of Castrol-R and exotic fuels permeated the air as some seriously special engines were fired-upin preparation for some slippy/slidey practise runs up the hill.

As the morning wore-on, the murk and mist started to lift and the competing cars were able to properly go through their paces on the bendy bits.

The skies even cleared sufficiently to allow a fly-past by a Dakota from the Battle of Britain Memorial!

Here are some of the cars (and a plane) that caught my eye in the paddock and on the hill:-

Austin 7 Specials are great fun to watch on race tracks and hill climbs. These diminutive cars with their 750cc engines and button sized brake drums come in a variety of body styles and occasionally with differently positioned engines!

The “Baby Austin” was as revolutionary in Britain as the Model T Ford was in the USA. It not only provided cheap motoring to the British masses – it also spawned the manufacture of cars under license in America, France (Rosengarts), Germany (the BMW Dixi) and in Japan (Nissan ………. who initially forgot to pay for their license)!

The Austin 7 also offered a cheap and cheerful entry point into pre-war and immediate post war racing. All you needed to do was pick up a scrapped Austin 7 saloon, chuck away the probably rotten bodywork and wrap the chassis in some lightweight open bodywork. Then hey-presto – you had a lightweight racer that could be tweaked or even supercharged to coax a few more horses out of that teeny-tiny 750cc engine.

This super-rare 1948 Cisitalia 202 SMM Nuvolari Spider – one of only five survivors of the twenty eight made was tucked inside a tent to protect it from the morning drizzle. 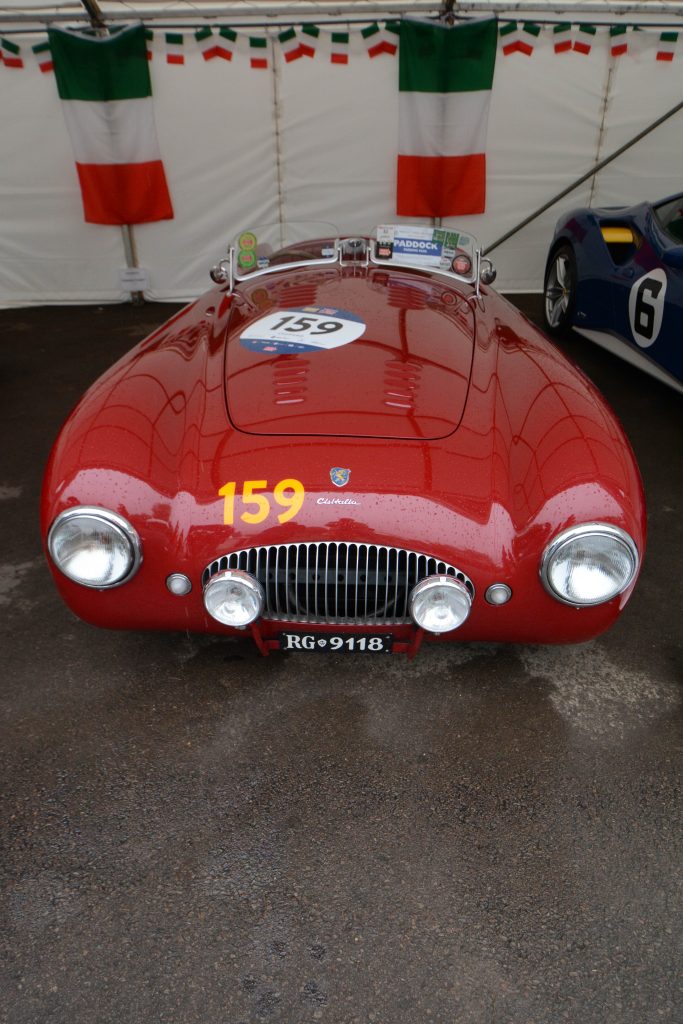 The history of Cisitalia (Compagnia Industriale Sportiva Italia) is tightly bound to that of Porsche through the the founder Piero Dusio who in 1946 commissioned Ferdinand Porsche to design a mid engined 1.5 Litre supercharged flat-12, four wheel drive Grand Prix car delivering well over 300bhp and with a top speed of around 186mph. 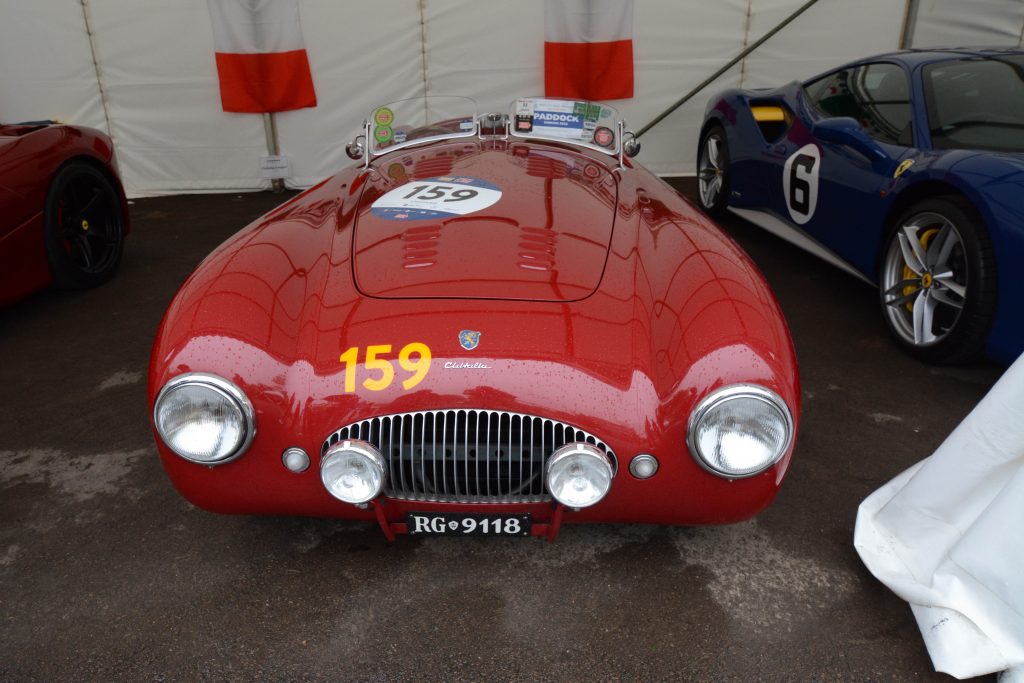 The incredibly advanced Porsche Typ 360 design borrowed heavily from an unused 1939 Porsche design for a flat-12 Auto Union engine. Sadly – funding for the Cisitalia GP car ran out before it could be fully developed to demonstrate its full potential on the race track.

Dusio’s commission did however pay for Ferdinand Porsche’s release from a French prison and enabled him (with son Ferry and other family members) to start building the very first Porsche badged cars.

Celebrating the La Vie en Bleu aspect of the event and with Prescott being the home of the Bugatti Owners Club – a number of pre-war Bugatti models were competing on the hill. 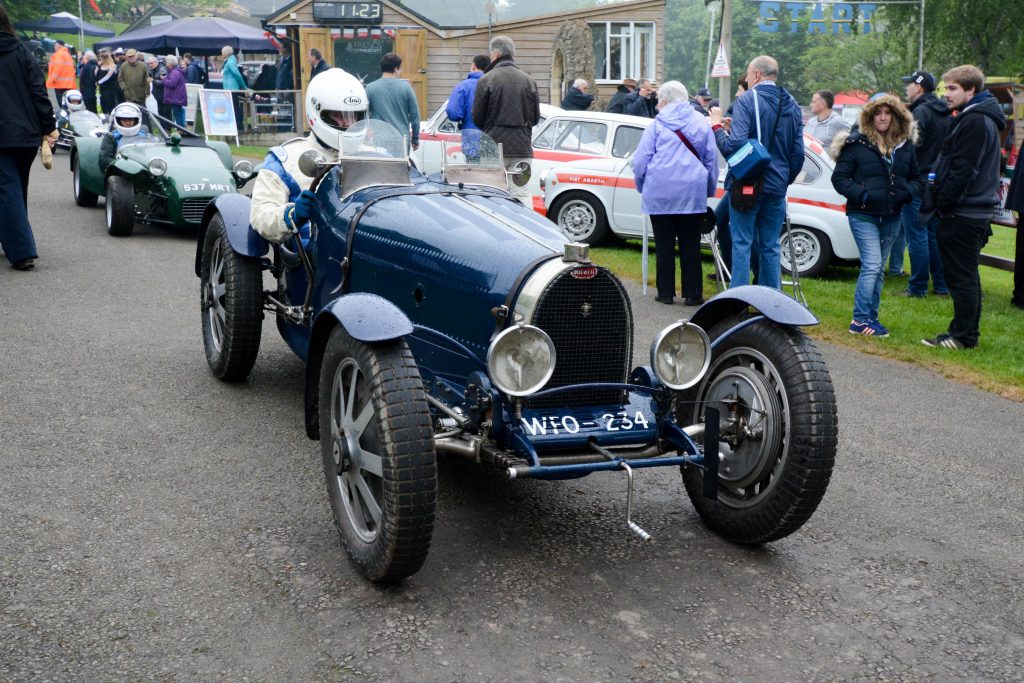 But just to bring ancient and modern together – some kind owners brought along Veyron and a Chiron models to treat the spectators to demonstration runs up the hill. 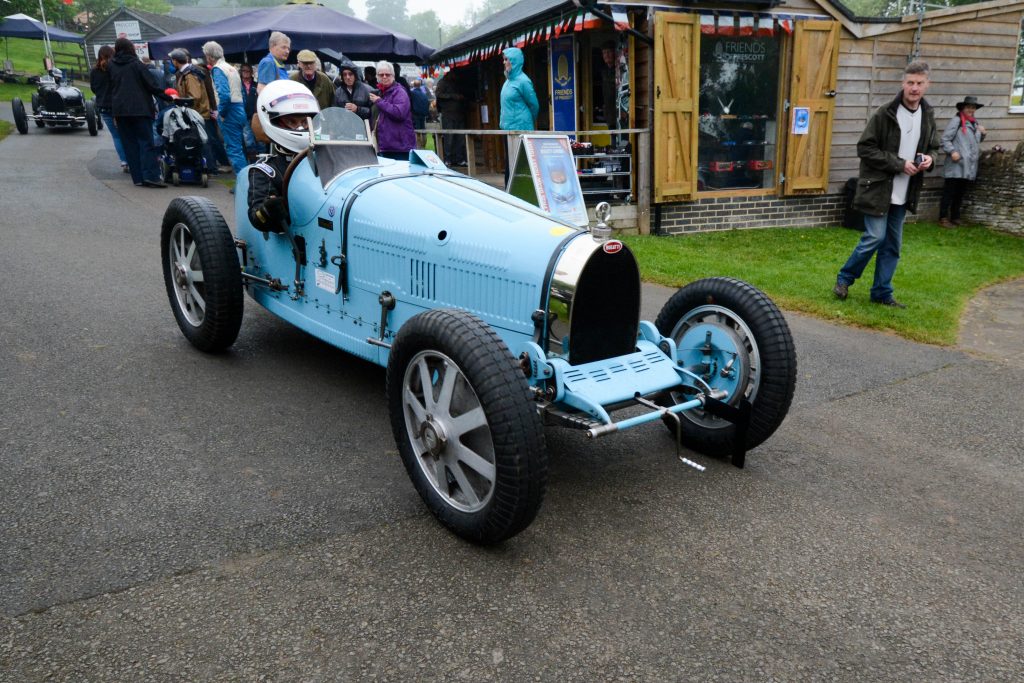 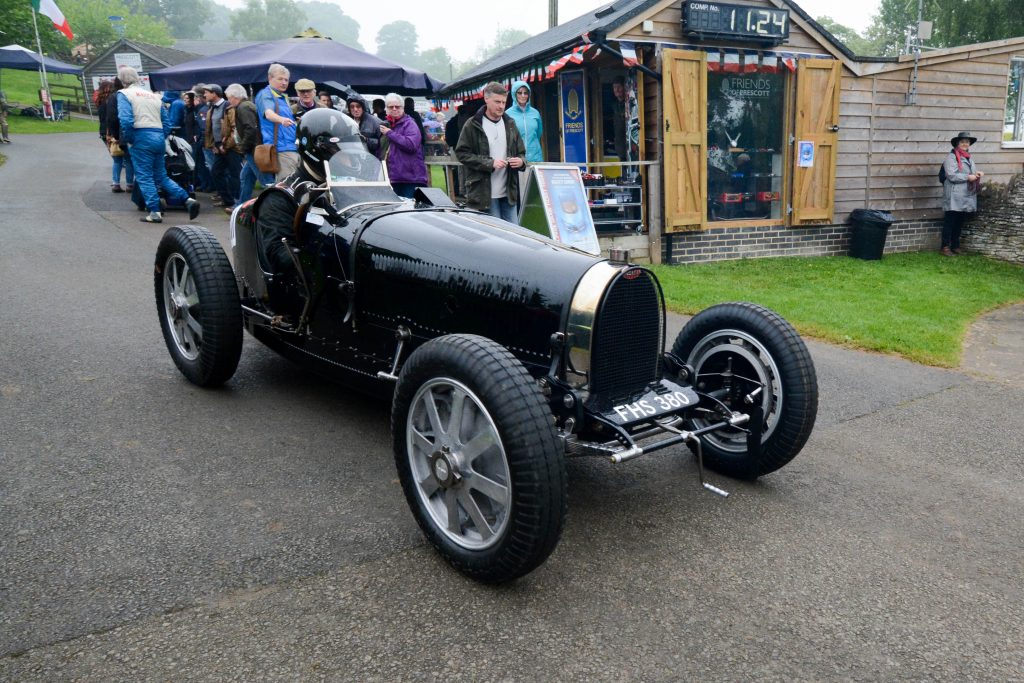 Whilst the pre-war cars looked magnificent in the paddock – they looked much more at home on the hill!

During our initial foray into the paddock – my attention was quickly drawn to a small gaggle of E.R.A.’s which had been fired-up to warm gearboxes and axles before first practise runs. 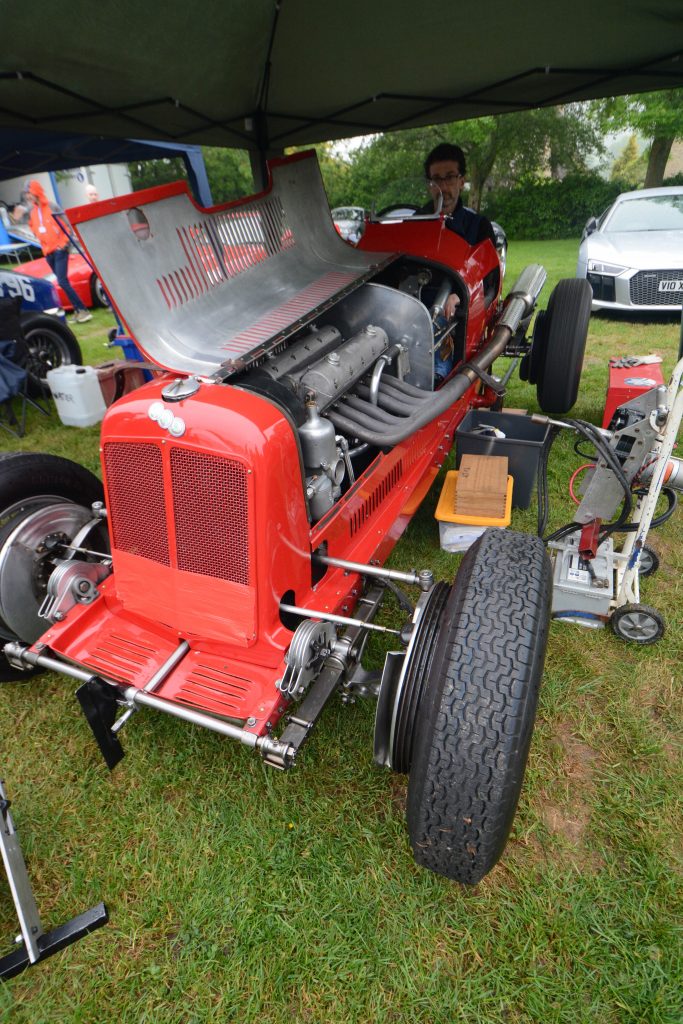 This firm was established in Bourne, Lincolnshire in 1933 by Humphrey Cook, Raymond Mays and Peter Berthon to build single seater race cars to compete with much more well established continental competition from the likes of Bugatti and Maserati. 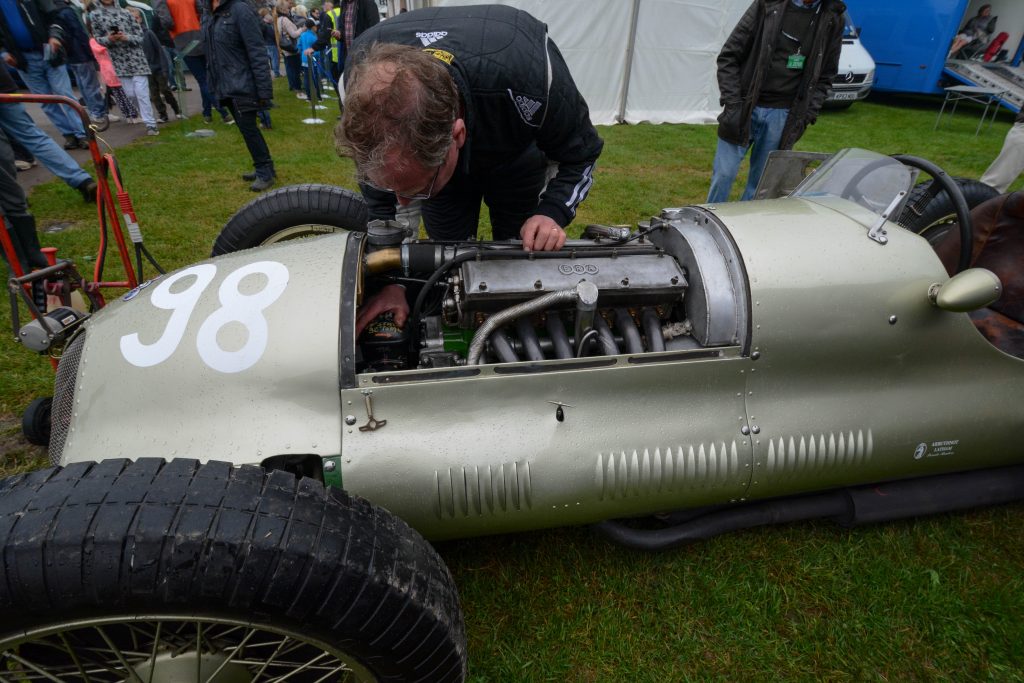 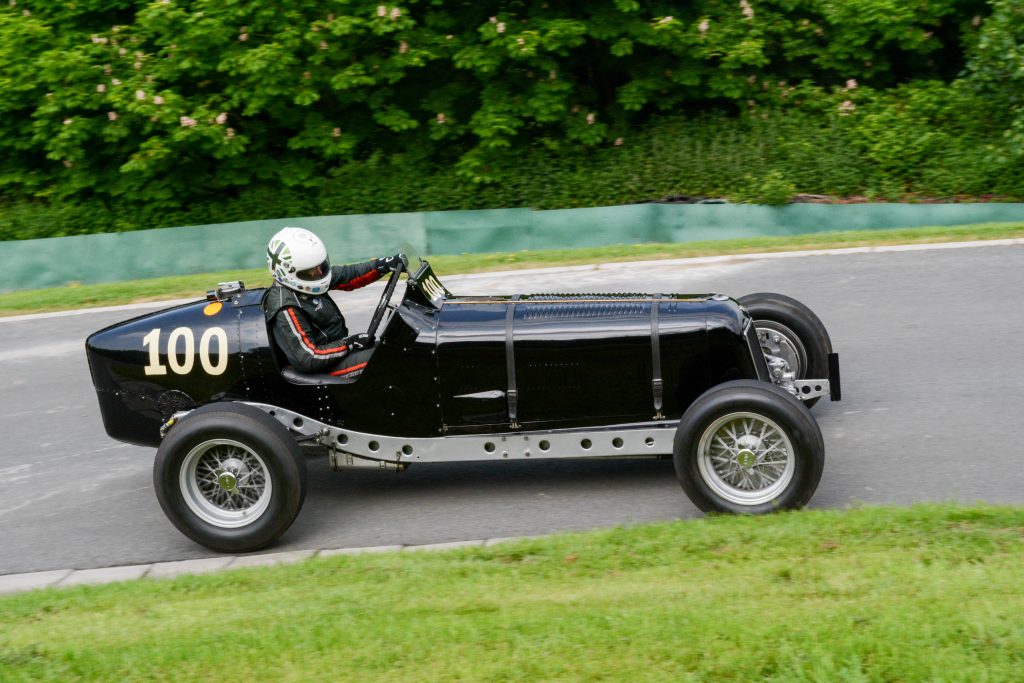 In the hands of a number of great racing drivers including Raymond Mays, Prince Bira and Dick Seaman – the E.R.A.’s punched well above their weight.

E.R.A.’s are seriously quick cars and were great fun to watch as they were wrestled up the hill.

The morning rain and mist didn’t bode well for the planned Dakota fly-past but to everyone’s surprise the old campaigner did appear and treated to the gathered crowds to no less than three low-level passes over Prescott.

This particular plane (ZA947) had been painted in D-Day colours to represent Dakota FZ692 of 233 Squadron which was used to tow troop carrying gliders and drop paratroops into German held territory on the eve of D-Day and then evacuate casualties out of the war zone during subsequent days and weeks.

More than 50,000 paratroops were dropped by C47’s during the first few days of the Normandy invasion so it was of enormous importance to the success of the campaign.

Its twin Pratt & Whitney 14-cylinder radial engines made a lovely noise as it passed over our heads.

In support of the LaVita Rossa theme – there was a large and obviously well organised turnout of Ferrari’s both in the visitors car park and in the paddock.

I was pleased to seen some interesting older cars such as a 275 GTB and a lovely 250 GT Lusso but still can’t get excited by the more modern Ferrari creations including the somewhat oddly named LaFerrari.

To be fair – the cars that went up the hill were quite nippy and made a rather nice noise!

Having briefly owned a TVR (a Ford 1600cc Vixen from their Kit Car period) – I have a natural affinity towards other British Plastic (GRP) products of the period.

Ginetta are one of many purveyors of British plastic cars and unlike many – it’s is still going albeit after a few failures and changes of ownership along the way.

Founded in 1958 in Woodbridge Suffolk by the Walklett brothers – Ginetta stayed in their ownership until 1989 when the company was sold, died the death, was revived by enthusiasts and then sold again to eventually return to rude health and a robust following through single marque race series such as the Michelin Ginetta G4 Supercup and the Protyre Motorsport Ginetta GT5 Challenge.

I like the fact that some of Ginetta’s earlier models were rebooted in modernised form. I always liked the original G4 (built between 1961 and 1969) which looked like a minature E-Type Jag but the later Series IV version of it created in 1989 in slightly wider and longer form looked and performed even better.

For more on British Plastic look at:-

The gentleman driving this gorgeous Lancia Aurelia B20 GT arrived at Prescott just after us and had similar difficulty finding somewhere to park in the already chocker Orchard. 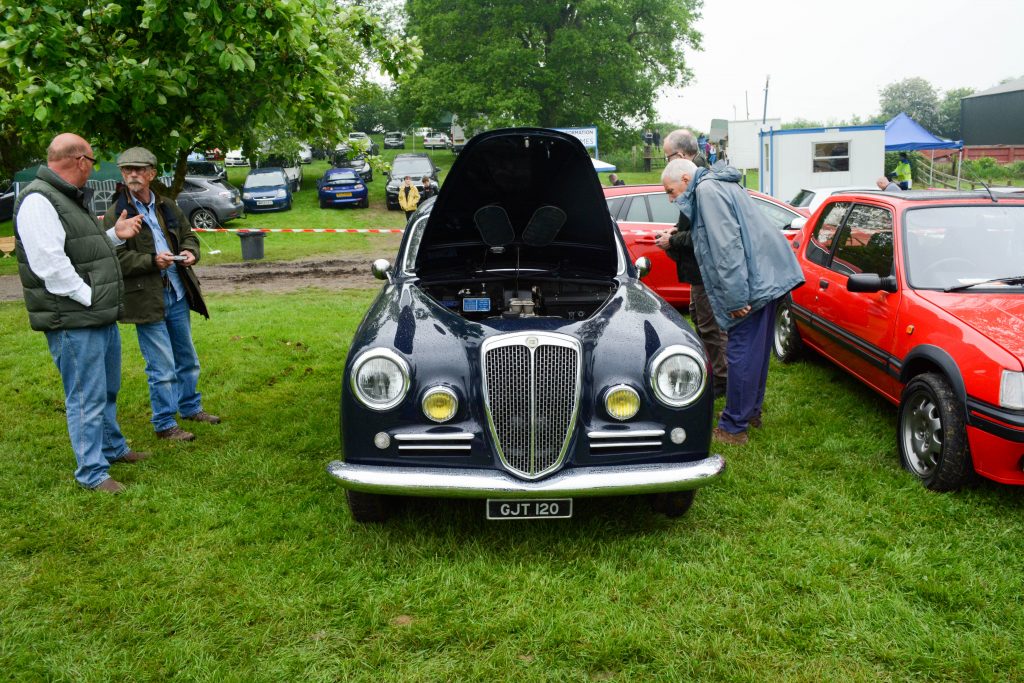 This was the first GT car and it retains a timeless elegance. Opening the bonnet revealed a beautifully engineered V6 engine designed by Francesco de Virgilio with its Weber carburettors nestling in the 60 degree V on top of a Nardi inlet manifold. This was another first for the Lancia – i.e. the first production V6 engine. 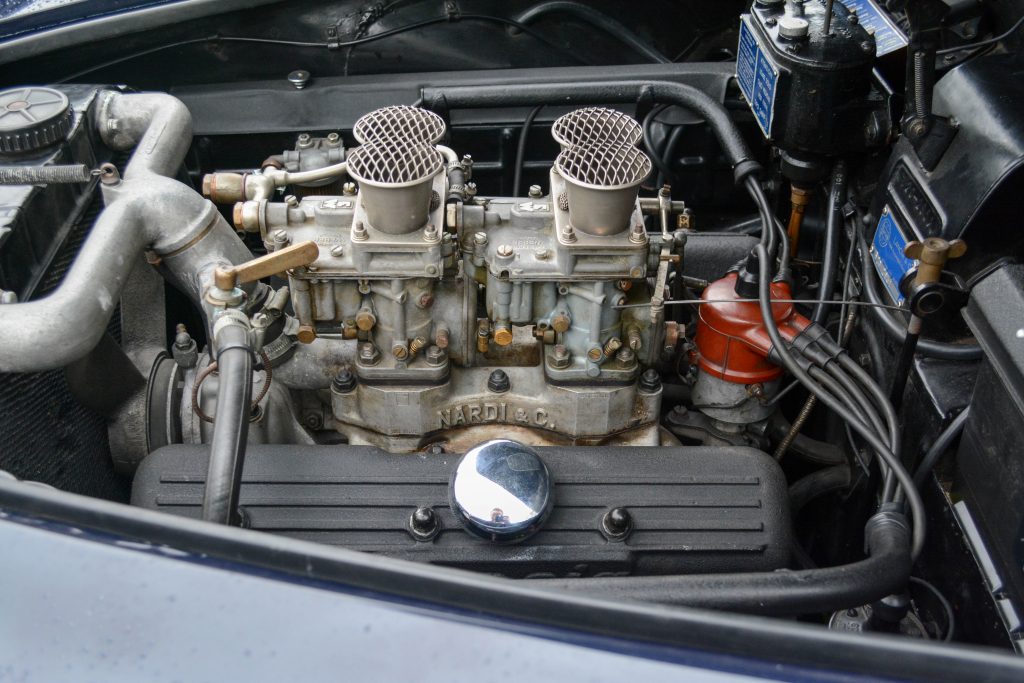 The interior which I sadly didn’t get to photograph was lovely with a pair of hip hugging leather bucket seats and classic Italian dashboard. 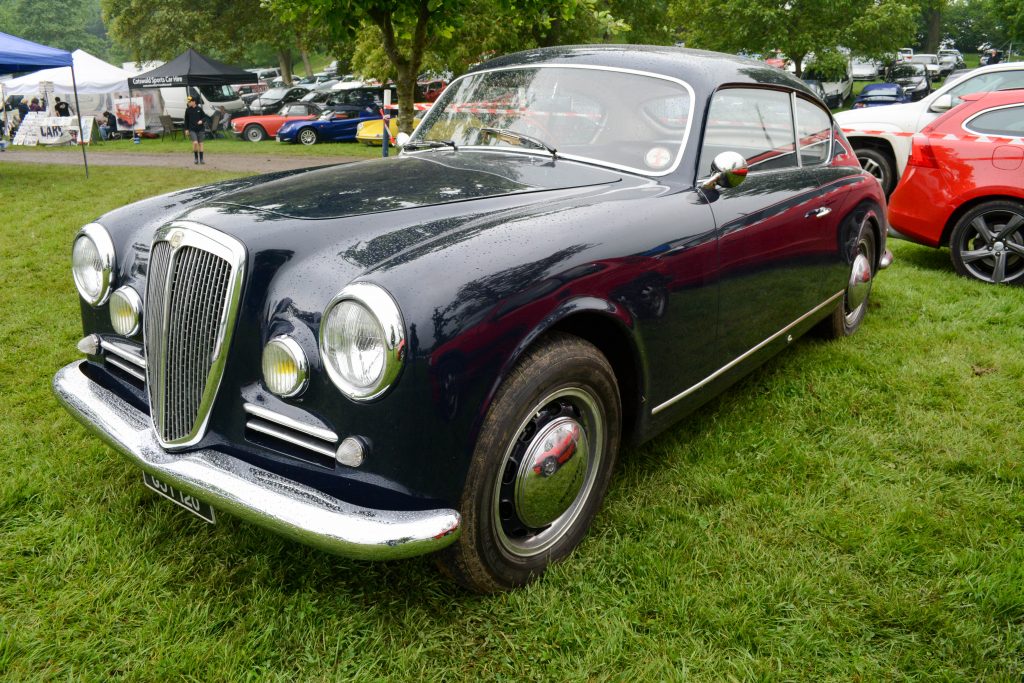 This Vittorio Jano designed car is quite definitely on my lottery win list of cars to own! 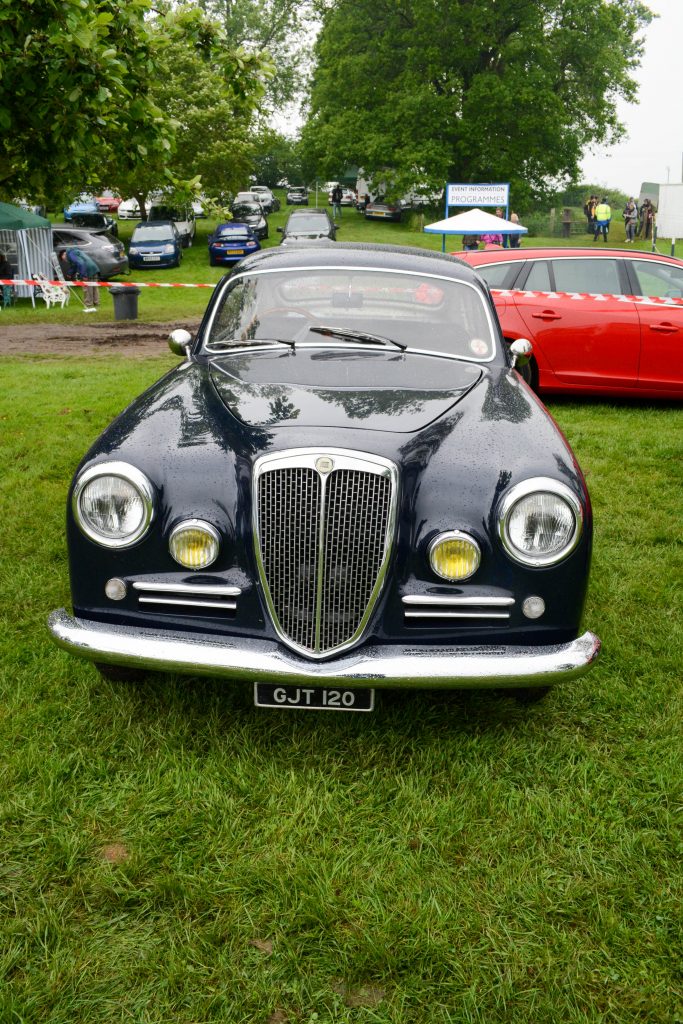 There was a good turn-out of MGs across a couple of MG Car Club categories. The resulting models ranged from decidedly vintage looking MG TC’s dating back to 1938, an MGA from the late ’50s, a whole host of Midgets and MGB’s from the ’60’s and ’70’s and then more modern “badge-engineered” models.

The TC’s seem to have the same sort of devoted following as Austin 7’s and most were in original form with the exception of a couple of TC based specials – the Dargue Special and the Lester MG T51 Xpag.

The Midgets and B’s came with a variety of mechanical and bodywork modifications to make them go quicker and must a really economical proposition to table in competitions given the good availability of cars and parts. The 4,600cc V8 engined B-Roadster sounded particularly good!

Here’s a gallery of the other interesting motors spotted on my wanders around Prescott:-

The Bugatti Trust Museum and Study Centre is a small but extremely interesting facility situated at the entrance to Prescott. 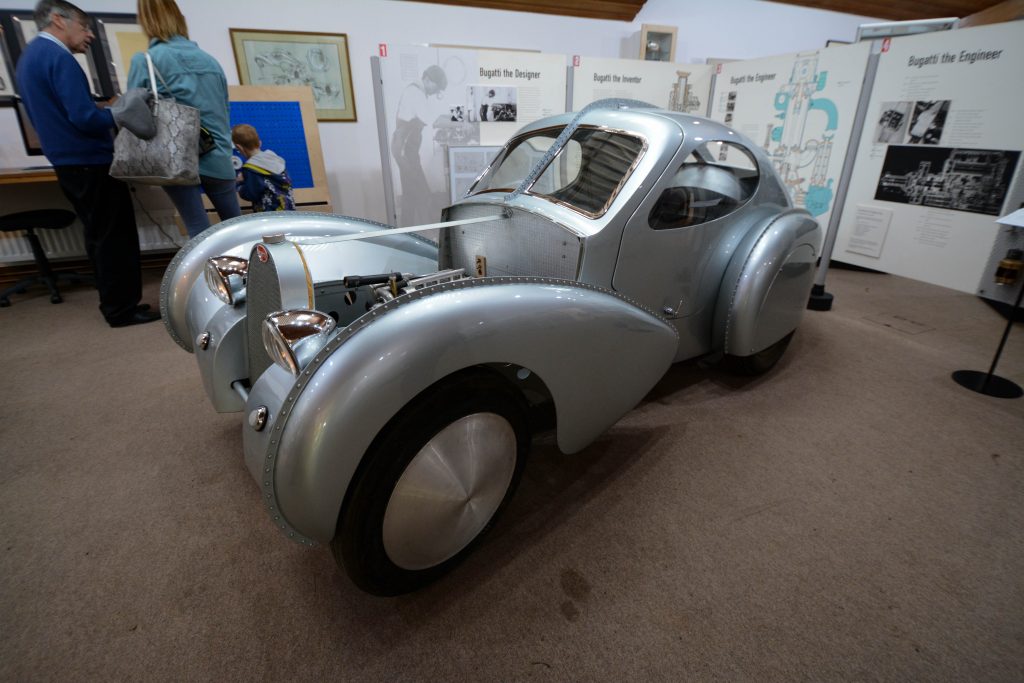 It provides some great insight into Ettore Bugatti and his artistic family through exhibits covering a wide range of his often ground breaking designs not just for for cars but also for trains, aircraft, ships, machine tools and medical instruments. 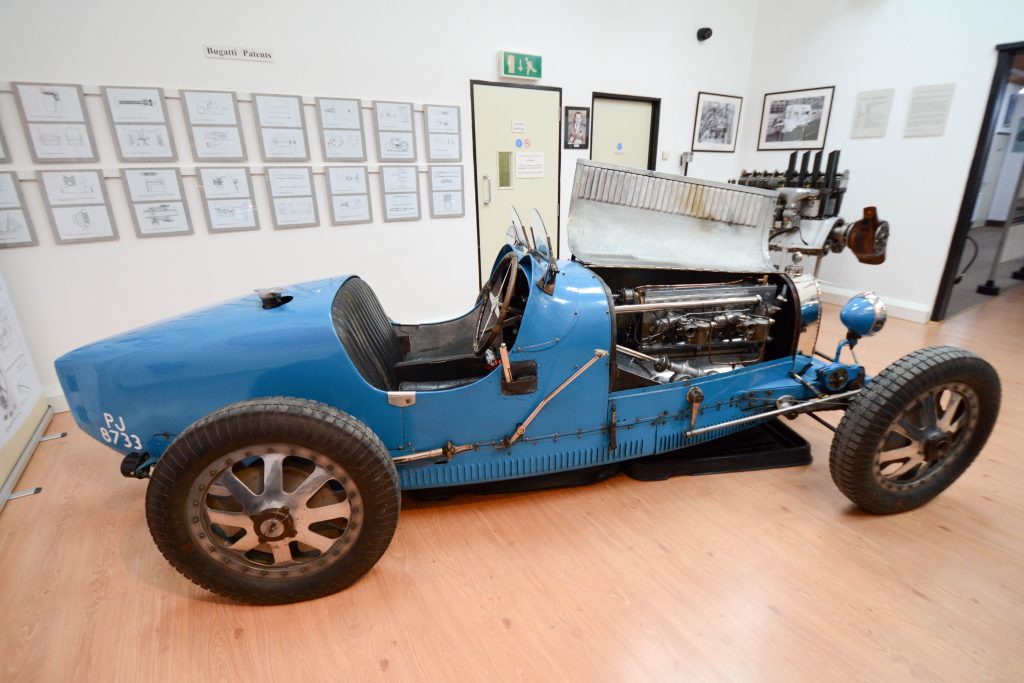 It is staffed by enthusiastic and knowledgeable staff who are keen to educate and inform visitors of any age and the place acts as a venue throughout the year for various talks and lectures. 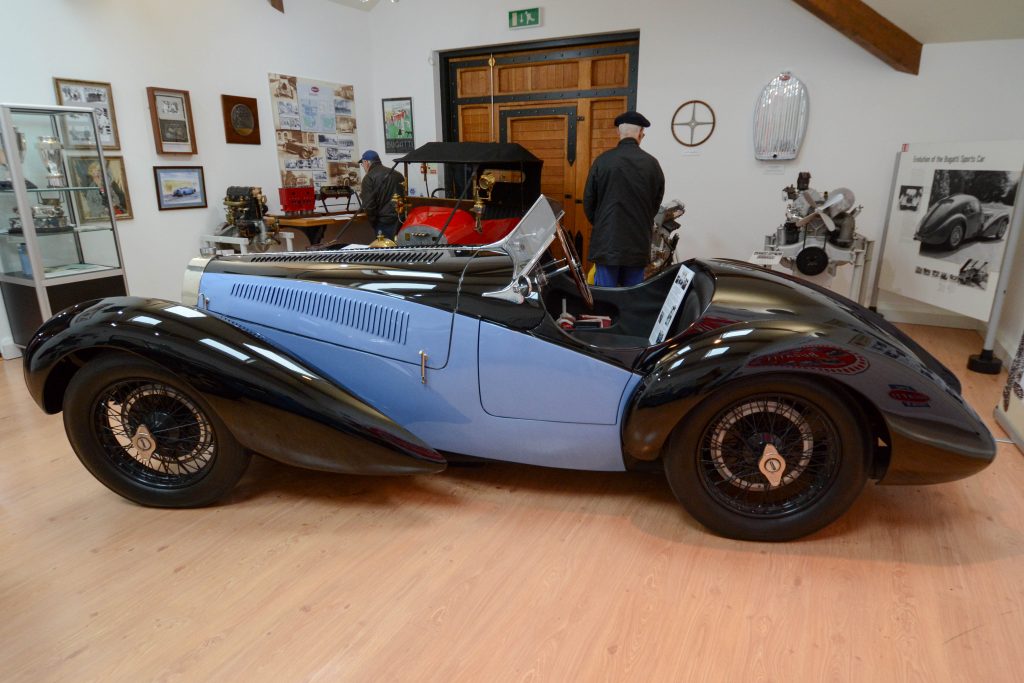 A number of the exhibits in the Bugatti Trust highlighted how as an effectively self-taught automotive engineer – Ettore Bugatti’s car designs  were an odd mix of innovation and conservatism but always with an artist’s eye for detail and high quality finish. 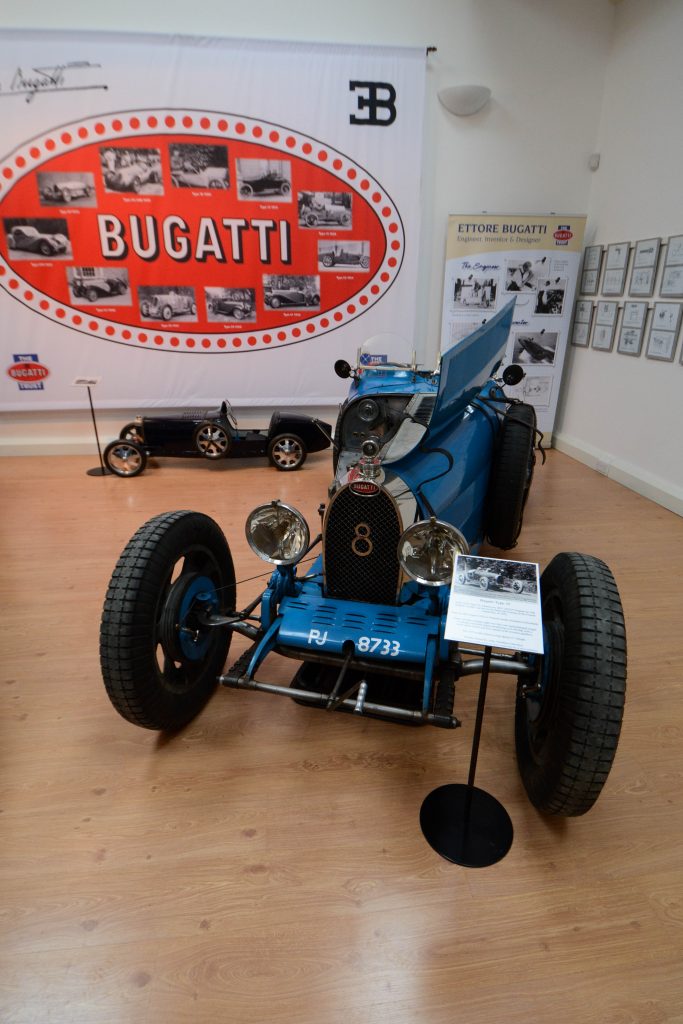 Bugatti race cars developed a dedicated following in their day and this continues through the latest custodians of these precious vehicles. Prescott provides a link to the past successes of Bugatti through contemporary participation in events at this venue by famous drivers of the day including Jean Bugatti – Ettore’s son.