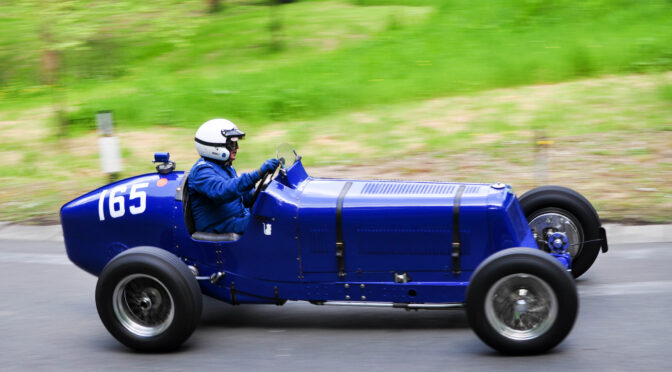 A 6AM start saw me blasting out of London in the old 911 along the M40 before hitting quiet country roads North of Oxford. Well they would have been quiet but for the fractious popping and banging of my engine!

Undeterred by fog, the aftermath of a nasty crash on the M40 and an inordinate number of flattened foxes and the odd two-dimensional deer littering the carriageway – I pressed on.

All Roads Lead To Prescott

Pausing to top up the petrol tank at a rural garage I happened to meet two delightful gentlemen in a wonderful Ferrari 196S Replica. With the driver wearing a racing helmet – there was no doubt that we shared a common destination.

After complementing each other on our respective cars and discussing the challenges of driving up from London on a distinctly chilly May morning in a completely open  car – we continued our journey to Prescott.

Upon arrival – the sun came out warming spectators, competitors and their vintage metal as the air was  filled with the unmistakeable rasp of race tuned engines being warmed-up for an assault on the hill.

Early arrival at such events allows time for you to really immerse yourself in the cars and chat with the owners/drivers.  Mooching  around the interesting motors being prepared for battle get’s you in the mood for the on-track action to follow.

Here are some of the outstanding cars of the day:-

Quite a few Alpines were parked up in the paddock area ready for the fray. Founded by Jean Redele just a short hop across the English Channel in Dieppe this French sports car manufacturer tried to emulate the success of their similarly rear-engined German counterpart the 911.

The concept of using a light weight chassis and fibreglass body with rear mounted engine and transmission was fine but for some reason – the Alpine never seemed to break away from the perception of being a low volume Renault parts-bin special.

Even after Renault bought the Alpine company the newer models still failed to be a commercial success and production ceased in 1995 although there is a rumoured revival of the Alpine model in the near future.

In the early days Alpine A110 achieved some significant success in rallying. This success and the rather pretty looks of the 1300cc and 1600cc cars generated an enthusiastic following.

The later cars under Renault ownership were bigger and less pleasing to the eye. Their V6 engines especially in turbocharged form certainly provided ample power to the already well handling chassis but marketing problems in certain countries (due to prior use of the Alpine name) and the relatively high cost of building low volume production cars forced Renault to drop the marque in 1995.

There is a rumour that Alpine will be revived in 2017 but this remains to be confirmed.

Tucked inside a tent near the Bugatti Owners club house were two imposing Avions-Voisin motor cars. The C14 Demi Berline was in immaculate condition inside and out with its gleaming black bodywork and authentically loud art-deco fabric upholstery.

The drop head car by contrast had the sort of patina that made it look like it could be driven anywhere in any weather conditions without worrying too much about the next concours event.

The simple but elegant metal bonnet mascot marks these cars out as truly iconic pre-war luxury cars. Their creator Gabriel Voisin designed and built early aircraft for Louis Bleriot before establishing his own company (initially with his younger brother Charles) to build aircraft.

Disillusioned by the military use of his aircraft during WW1 – Gabriel Voisin switched his skills to the construction of luxury cars often incorporating radical streamlining features lifted from his aeronautical experience.

The Beast of Turin

I’ve read about and have seen videos of this creation of Beelzebub but nothing quite prepares you for the real thing.

This crazy car (actually Fiat’s S76 model) was constructed in 1910 to contest the land speed record which was at that time held by the Blitzen-Benz.

The car managed to secure the land speed record in 1911 with a speed of 116 mph.

Only two cars were built – one of which was dismantled shortly after WW1 and the other was sold.

Eventually ending up in Australia – the surviving car was purchased by Duncan Pittway who brought it to Britain and lovingly restored it over a period of 10 years bringing it back to factory specification  using one of the original engines.

It’s only when you the see the driver in the car or someone standing next to it that you realise the bizarre mismatch in scale.

To house its gargantuan 28.5 Litre 4-cylinder engine – the bonnet line has to be enormously high. This results in the relatively normal sized wheels looking like buttons pinned to the chassis.

Originally founded by Alexandre Darracq in 1896 this Paris based car manufacturer became extremely successful with branches across Europe.

A reversal of fortunes saw its UK branch (Sunbeam-Talbot-Darracq) taking over control of the parent company in 1920. The cars at Prescott represented these two phases of ownership.

This car is the incredible Darracq 200hp land speed record car dating from 1905 and sporting a 25422cc engine.

There is a great story attached to the car which was stored over many years, partially dismantled and had its chassis cut down before being rescued and restored to fighting fitness.

As stripped-down racers go – this is pretty spartan but it goes like stink!

It was wonderful to see no fewer than four 1930’s E.R.A.s competing on the  Prescott hill. These cars have such a wonderful provenance in terms of design and the famous drivers who raced them. 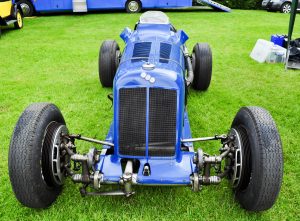 On the design side – Reid Railton worked on the chassis, Murray Jamieson on the Riley based engine and Peter Berthon controlled overall design.

All of the cars on the hill dated from the highly successful pre-war Voiturette Racing period in which the cars were producing 180-200bhp in 1500cc form and 250-275bhp in 2000cc form.

Don’t be fooled by their quaint pre-war looks – these cars are very quick and they are great survivors from a halcyon period of motorsport.

Use of the Supercar description for top-end sports cars only really became established during my youth in the ’70s when I believe the Lamborghini Miura was the first car to be given that soubriquet.

With no definitive criteria for what constitutes a Supercar – the term has inevitably been abused and devalued over time so we probably need to coin a new superlative for the most super of supercars e.g. “Hypercar”.

Of all the cars that could be awarded the hypercar title – the main contender has to be the Bugatti Veyron. This automotive indulgence pushes the boundaries of conventional automotive engineering and the laws of physics.

Rumour has it that each car costs around £4 million to build resulting in them being sold at an enormous loss but what an absolutely wonderful automotive folly.

There were two Veyrons were on show in the paddock and on the hill, plus a lovely Veyron predecessor in the form of the Bugatti EB110. 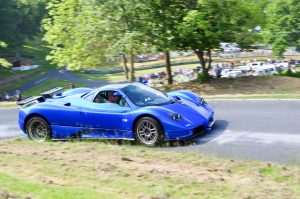 Other pretenders to the Supercar crown on display included a Pagani Zonda S and the stupidly named and rather effete looking LaFerrari.

Give me the Veyron’s any day!

Lorraine-Dietrich manufactured cars between 1896 and 1935. This car dates from 1909 and features a reassuringly chunky 16400cc engine.

The stripped-down style of this car is just great – from the stonking great exhaust system to the cylindrical fuel tank mounted at the back.

After car manufacturing came to an end – Lorraine-Dietich survived until the current century by specialising in the manufacture of aero engines, trucks, military vehicles and locomotives.

Witnessing pre-war Bugattis being used in anger is a wonderful sight.

These priceless automobiles were built to be driven – not to be cosseted-away and members of the Bugatti Owner’s Club are proud and active custodians of these motoring jewels.

The cars from the 1920’s and early 1930’s have the most elegant simplicity of line and purposeful stance that shouts out “drive me”! 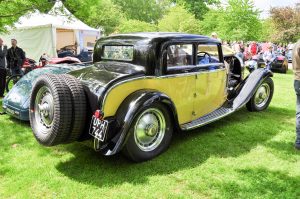 Whilst the early racing cars look crude – they actually had some quite innovative features such as quick release alloy wheels with in-built brake drums. 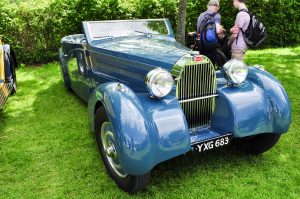 The absolute epitome of luxury was defined by the massive rail-car engined Royale. It’s such a shame that the royal houses of Europe failed to take the hint and buy a Royale for their respective regal fleets.

The Royale was arguably Europe’s repost to the Maharaja Rolls Royce extravaganzas but sadly there wasn’t the same where-with-all  within European royal houses to purchase them.

This rare Swiss marque was designed by the Dufaux brothers and built by the Piccard-Pictet company in Geneva.

Better known by the shortened name Pic-Pic they were manufactured between 1904 and 1924.

Piccard-Pictet benefitted from a large order for cars from the Swiss army at the start of the 1st World War.

Their fortunes waned however after the cessation of hostilities and they filed for bankruptcy in 1920. Takeover by Gnome et Rhone at that time kept Pic-Pic manufacturing chugging along until 1924.

Here are a few more shots of the cars and the action from what was a highly entertaining day out:-