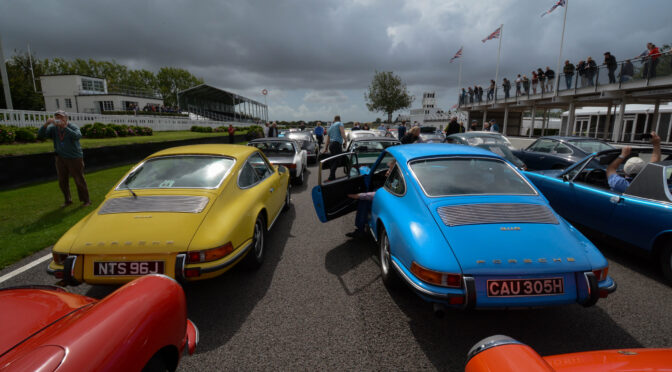 Porsche KG – “what’s that?” I hear you ask. Well, it stands for Porsche Konstruktionen GesmbH, the company founded in 1947 by Ferry Porsche and his sister Louise Hedwig Anna Wilhelmine Piëch in order to build the very first Porsche badged cars. Porsche KG changed to Porsche AG in 1973 when the company went public.

The Porsche Club of Great Britain organised the KG event at the glorious Goodwood Motor Circuit as a celebration of Porsche cars built during the “KG” years from 1947 to 1973.

This event effectively replaced the Classics at the Castle pre-’73 Porsche event previously at Hedingham Castle which I attended a number of times and really enjoyed. Hedingham’s position in Northeast Essex made it accessible to fellow Porschephiles from the continent and its proximity to Stansted Airport also allowed visitors from much further afield to attend.

I don’t know the full background to the organisation of the Goodwood event seemed to be a somewhat tentative replacement for Hedingham which might or might not become an annual or two-yearly gathering of classic Porsches. As far as I’m concerned it was a success as it offered a very different experience for visitors.

Although the Hedingham setting beneath an imposing Norman castle keep was spectacular, the opportunity to see old Porsches moving at reasonable speed and hear their engines being revved was quite limited. Goodwood by contrast offered generous chunks of track time for those who’d signed up for it and even a two lap parade around the track for those who hadn’t.

Ultimately however, the event was all about the enthusiastic custodians a lovely bunch of classic Porsche cars ranging from Delwyn Mallet’s split-screen 356 Supercharged Streamliner evocation to a fire breathing 911 Carrera 2.8 RSR.

It was a delightful surprise to see this Splitscreen 356 Streamliner recreation which has been owned and onward developed by Delwyn Mallet since the early ’70’s but which has gone through a recent metamorphosis including some new panel work, new paint in a lovely shade of grey and the insertion of a supercharged (yes SUPERCHARGED) engine.

The car which is based upon a split-screen pre-A 356 is a homage to the Type-64 Berlin-Rome VW Streamliner and the super-lightweight Gmund aluminium bodied SL’s that were raced at Le Mans from 1951.

When there is only one Type 64 surviver of the three built and only one SL survivor of the two built, recreations are the only real chance for normal mortals to see how the earliest of Porsche cars looked, smelled and sounded. Rather ironically, the last surviving 356 SL was subjected to reconstructive surgery at Emory Motorsports to restore the roof (which had been cut off the car by a USA owner) and to revive the rest of the car. It was good therefore that Rod Emory was able to examine this car during his UK visit.

Moving on from the earliest split screen Gmund built aluminium cars and the splitty Pre-A steel Stuttgart built cars, the later Pre-A 356’s were fitted with a Knickscheibe or bent glass windscreen. This was a single piece of glass which dispensed with the central glazing bar but which retained a central ridge or bend in the glass.

This blue Continental was an unusual sight as very few 356’s were produced for the US market with the Continental suffix before Ford took umbrage at Porsche “stealing” the model name from their Lincoln. This particular Continental is even more unusual in that it is right hand drive.

Not always obvious to the untrained eye, the give-away sign of the Knickscheibe cars are the “clap-hands” windscreen wipers required to deal with the two different flat planes of the one piece windscreen.

The more I see these cars, the more I like them when compared to earlier and later 356’s. the cars retain the charm and beautiful lines of the earliest cars (low set wings and headlights, beehive tail lights, bent screen etc.) whilst giving a hint to the higher volume production cars to follow in the form of the Types A, B and C cars in T1, T2, T5 and T6 body configurations.

The two cars which stood our were those of classic racing protagonists Simon Bowery and Sam Tordoff. Goodwood is a second home for these cars which battle it out at various classic meetings.

If I could have taken any 356 home with me from the KG event, it would be Simon Bowrey’s car. It is meticulously restored, presented and prepared. The bees-knees and D’s B’s combined as far as I’m concerned!

The 356A produced from 1955 used to be my favourite 356 before my affections shifted to the earlier Knickscheibe Pre-A’s but the A is still a pretty, and probably more practical car.

The lovely creamy white steering wheel, dashboard knobs and gear stick top are delightful. Why oh why did they stop making these?

I’m still a 356 novice in terms of the differences between each model and the variations during the life of each model but events such as this are educational. Then there are the “Outlaws” to contend with!!!

Race prepared or presented 356’s can look even better than the standard road variety, devoid of bumpers and other such frippery, additional cooling louvres cut into the engine lid and period leather straps holding bonnet en engine lid down.

Designed more for Californian sunshine than UK weather conditions, The Speedster always looks good – hood up or down. It’s ironic that these were a budget cut-down version of the 356. How values have changed!

Something of an ugly duckling in the panoply of classic Porsches, the 914 was a joint venture with VW but when VW’s interest in the project waned, the car was more fully “adopted” by Porsche and it even fitted a flat-6 2.0 Litre engine into the 914-6 model supplanting the 1.7 or 2.0 Litre VW engines.

Racing versions of the 914-6 were also blessed with boxy wheel arch extensions to accommodate chunkier wheels and tyres giving them with a much more aggressive and purposeful look. Film actor and Porsche racing enthusiast Paul Newman ran a team of 914-6 race cars at one time.

I’ve never driven a 914 but their mid-engine configuration supposedly imbues them with great handling and they have to be regarded as the precursor to the much later Boxter.

Early 911’s are wonderful cars. Small, narrow, light weight and blessed with a great power to weight ratio. They also look beautiful from any angle and were painted in a lovely range of primary colours which helped them to stand out when flying up behind more mundane motors on roads and motorways during the ’60s and ’70s.

There’s something particularly pleasing about the rear view of a line of early 911’s. I guess it must be the sloping tails giving the psychological impression that they are all about to blast-off into the sunset.

Long gone are the days when the only car to have was a late 2.4S or 2.7 RS and you couldn’t give away short wheel base cars or lower spec 911’s. The later and more sporty cars are still eye-wateringly expensive but the earlier and lower spec cars are catching up in value and are now treasured for what they are – great little cars and the start of the long lived 911 line.

This was quite an interesting early 911. An untouched and unrestored example according to my mate Kirk who knows about these things. With it’s Floridian Brumos Porsche license plate and sloping 911 script on the rear deck it certainly looked the part but someone will be faced with the terrible dilemma over whether to restore the car or simply preserve it in its patinated but completely original form.

Josh Sadler (formerly of Autofarm fame) turned up with this battered and bruised 2.7 Carrera RS which had apparently spent over three decades in storage.

This rather brutal looking 911 Carrera 2.8 RSR represented the end of the classic 911 period before impact bumpers were introduced. Only forty nine of these cars were built, based upon the 2.7 RS but featuring expanded and more powerful (300 bhp) twin-plug engine, wider wheels and wheel arches front and rear to accommodate them and central spoiler mounted oil cooler.

These cars look fantastic. Still recognisable as an early 911 beneath the fat wheel arches and more aggressive stance but hinting towards the even wilder 911’s to follow in the form of the 934 and 935 Turbo racers.

As an inaugural event for classic period Porsches to replace Hedingham, I have to say that I really enjoyed it. It was great to meet up with friends old and new to nerdily immerse ourselves in earnest discussions about the perils and pitfalls of building 911 ST replicas, how to deal with prevaricating, precious Porsche restorers and how to differentiate the finer details of 356’s. All stuff of significant international importance I think you’ll agree!

Some great cars turned up and the icing on the cake was a chance to drive our beloved cars around the Goodwood circuit after the pit-straight photo-call and the subsequent enforced silent “track lunch break” to meet local noise abatement bylaws.

I’ll definitely go again next year or the year after if it turns out to be a twice-a year event but next time I think I’ll pay the extra to spend lots more time on what seemed to be a relatively empty track with the Yellow Peril! Must remember to add racing helmet and Piloti shoes to my Santa Christmas pressy list.