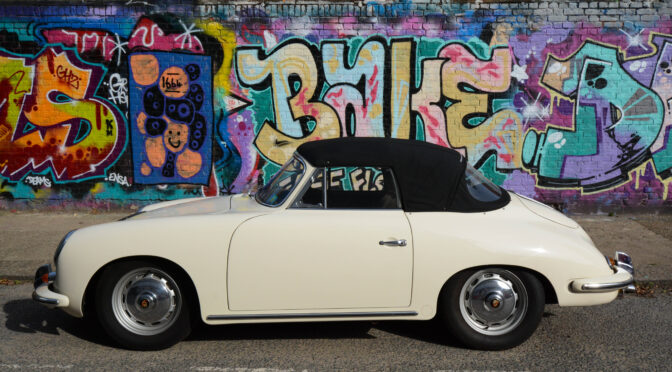 With the weather set fair, the wife having a lie-in and daughter not requiring a Duber (Dad-Uber), the monthly PCGB Hackney Wick 3rd Sunday in the month Porsche get-together beckoned!

The 911 hasn’t had much use in recent weeks for a variety of reasons so I was keen to establish if:-

Thankfully after a bit of Saturday afternoon pampering (wash, polish and tyre-air replenishment) the Yellow Peril was fully fettled. It fired-up first turn of the key and its eagerness to get down to Hackney Wick was only constrained by the doziness of of other early morning drivers.

Classic insurance is great but as I have an agreed value policy – I thought it best the check the cars current value.

Steve and Claire Winter at Jaz Porsche kindly furnished me with an updated valuation. They know the car inside out having looked after it for over 20 years but I thought I might also try the Porsche Club assessment as well for which I needed a whole bunch of photos.

Arriving at Beachey Road/Stour Road just after 08:00 wasn’t quite enough to beat the early birds but it did give me time to park-up in a nice sunny spot near the Formams Fish Emporium, open up boot, engine lid, doors etc. to take a full photographic inventory for the PCGB valuers to peruse.

It’s always nice when a small convoy of 356’s turns up. Its enough to brighten up anyone’s day! Sundays convoy was led by a T6 bodied Cabriolet Super 90, followed by an SC and an early A.

All 356’s are a delight to behold and I know that the latest C’s and SC’s are the most practical and sensible to own and drive BUT there is something bout the lower bumper line of the early A and Pre-A cars which really sets them apart. One day…………..!

This in-your-face lime green Carrera was stunning. Interestingly the engine was running PMOs.

Where have all the 944’s gone? It’s a mystery but at least this tidy Turbo was let out for the day. It looked a treat with its orange Turbo decals and matching orange wheels.

Last of the air-cooled 911 line and to some……..the last real 911. The 993 really is a beautifully designed Porsche package with or without a stonking great rear spoiler!

I’m all for a bit of peace and unity in the community.

One has to admire the inspired move that Formans made to their current site in the lead up to London Olympics. They didn’t move far but the recent installation of a bridge across to the River Lea now links Formans to Queen Elizabeth Olympic Park and the London Stadium.

Their top floor entertainment space provides a lovely source of good food an drink to West Ham fans on match days but the really interesting bit of the building is the cavernous fish smokey which can be looked down upon from a visitors gallery.

The first floor provides the Sunday brunch dining space for the monthly Porsche Club meeting and this is complemented by the ground floor deli offering up super fresh smoked salmon and cream cheese bagels. Yum yum.

Having gotten important early cars, graffiti and Formans out of the way – I suppose I have to show some piccies of modern Porsches!