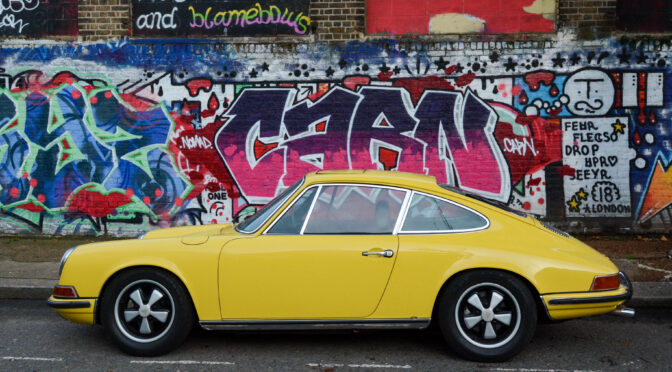 Jet lag after returning from Japan meant that I had no problem getting up to attend the Out East Porsche Club get together in the wilds of Hackney Wick. It was just a shame I had to wait 6 hours after I woke-up at 2AM to attend!

As the Yellow Peril raucously rounded the corner from Beachy Road onto Stour Road, the sight of a lovely silver 928 parked-up next to the multi-coloured graffiti walls allayed my fears that I’d got the date wrong.

I really like the 928. I think it suffered from the stigma of being the front-engined, water cooled V8 replacement for the 911 in the eyes of die-hard rear-engined, flat-6 air-cooled cognoscenti of the period.

Thankfully Peter Schutz and Helmuth Bott put paid to the ill-conceived idea to retire the rear-engined 911 in favour of the front-engined 924 and 928 although I remain unconvinced about to evolution to water-cooled 911’s!

Chatting to the proud owner of this 928 – he was really happy with the style and performance the car provided. Whilst I’m keen to try driving one of these beasts at some point, I suspect it would just encourage me to buy one. I’d best avoid a test drive!

Front-engined friends arrived later in the form of a couple of 944’s – in Turbo and a normally aspirated form. Now I have driven one of these and they are great fun.

As Autumn moves inexorably towards Winter – the number of 356’s being allowed out is sadly likely to reduce, but this cool, dry but sunny Sunday might have been a last chance for lucky 356 owners to get out for a blast.

I was however much more keen on this exquisite 1959 356A in it’s lovely grey bodywork and contrasting red leather trim. The white steering wheel and switchgear in the A is just so period and stunning.

Other early 911s were ingather short supply until a brown LHD ’73 2.4T turned up. Brown is a very period ’70’s colour but not one of my personal favourites.

I have recently warmed to the shape of the 964 which bridged the gap between the classic 3.2 Carrera and more radically reimagined but exceptionally pretty 993. There is a simple and uncluttered solidity about the 964 design and it’s underpinnings.

When I said that the 993 is pretty, it can also look pretty brutal!

Try as I might, I still find it hard to like the 996 but one can’t deny that they offer good value purchase entry points into Porsche ownership -especially the higher performance models. The designer of the “fried-egg” headlights really should however be locked up for crimes against Porsche design.

Whilst I can’t get excited about the styling of much more modern 911’s, it’s good to see that the factory still uses lard colour schemes to ensure that these potent projectiles are seen from a long way off in the rear-view mirrors of more mundane motors.

As colour schemes go however – there’s no beating the graffiti walls.