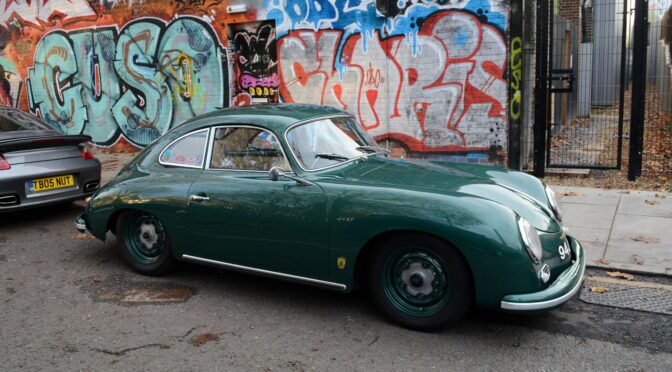 It’s scary how quickly these monthly Porsche Club meetings keep coming around. The time gap between them seems to shorten even faster as we we enter the dark, dank Winter months but I guess that entirely related to the declining hours of daylight.

Winter to not, the forecast of a dry November day was enough to entice Porsche owners pull their cars out of their garages to join the gathering in Hackney Wick.

There was a time when owners thought these lovely cars were too precious or too fragile to venture out onto pothole ridden London streets other than on balmy Summer day. Modern 356 owners are however made of sterner stuff and they are happy to share their wonderfully stylish motors with the masses pretty well all year round (with the proviso that roads and sans salt)!

During my relatively brief visit to Out East, I had the pleasure of seeing four 356’s of various ages which is as good as it gets in mid-November.

As the value of older Porsche’s continue to increase, the questionable practise of updating older 911’s to look like newer ones has thankfully gone onto reverse gear.

Previously updated cars have where possible been returned to original spec and in recognition of the simpler classic styling of earlier models there is now more interest in backdating 911’s to look like earlier and/or more rare/valuable models. RS replicas took off big time for a while but now more and more people want to emulate earlier and rare as hens-teeth models such as the R and ST.

I could never quite get my head around the updating trend but I can relate to back dating!

The owner of this beast told me that it started life in Canada before moving to Japan before he acquired it and dragged it back to Blighty. They must be belligerent buggers to drive but it must feel very rewarding at the end of a journey to reflect on the fact that unleashed turbo boost did not (on this occasion at least) deposit you and the car into a ditch!

I’m of the school of thought that the 993 was the last true 911 on the basis that air-cooled rear mounted engines were the defining feature of the model. When Porsche introduced water cooled engines and then had the temerity introduce mid-mounted water cooled engines to the 911 range it was all a bit too much for me and I had to go to a darkened room to lie down and dream of classic 911’s.

Modern 911’s, especially the more sporty models have undeniable presence, BUT they are bloody massive when compared to my minuscule ’71 Yellow Peril. What went wrong?

The Beachey Road/Stour Road venue for the 3rd Sunday in the month Porsche Club meet is still great but the pace of building new apartment blocks in the once semi derelict and clubby, grungy area seems to have accelerated. There will come a time when the swish modern saloons of newly ensconced residents will fill all available street parking and the Porsche Club will have to seek out a new venue ………. which will be sad.