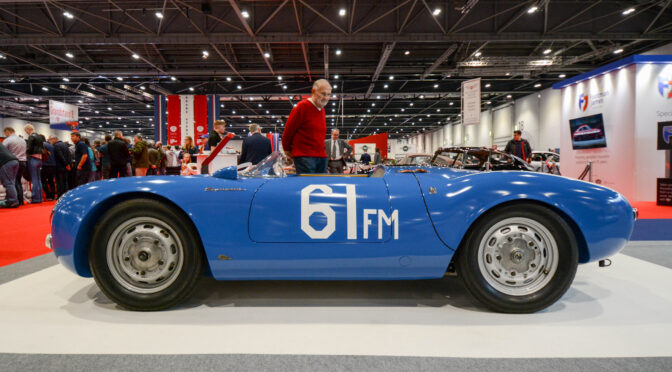 In the dark and gloomy midst of a British Winter – classic car shows offer a form of care-in-the-community for stimulation-starved petrol-heads.

The annual migration of middle-aged blokes into cavernous East London halls filled to the gunnels with classic cars and all manner of automotive paraphernalia provides much needed respite for the long suffering wives and girlfriends who are abandoned (given freedom) for the day or for luckier individuals – the weekend.

Like wildebeest crossing the Serengeti – herding instincts drive the gathered crowds inexorably towards beery watering holes and long queues for overpriced pizza and burgers before entering the exhibition halls and a state of classic-car-nirvana.

That’s quite enough rambling – what about the cars?

Well there was quite a variety on show on club stands, special displays, the “paddock” and in the corralled collection of cars to be auctioned by Coys.

Arch Wheeler Dealer Edd China was roped-in by the organisers to curate a small gathering of Aero engined cars. Small refers to the small number of cars on display but being aero engined – “small” in no way referred to the capacity of these beast – which was bloody enormous.

Perhaps the most impressive of the bunch was Babs – a Land Speed Record car that famously crashed on Pendine Sands in 1927 killing its driver/designer J.G. Parry-Thomas. The car actually started life as one of Count Louis Zborowski series of Chitty Bang Bang cars. This particular car was Chitty Bang Bang 4 – also known as the Higham Special – named after the Count’s estate near Canterbury where the car was constructed.

The car utilised a 27 Litre Liberty engine which after a bit more development under Parry-Thomas’s ownership established a new Land Speed Record of 171.02mph in 1926.

After the car’s high speed crash in 1927 – the car was buried on the beach at Pendine Sands only for the rusty remains to be exhumed in the late ’60’s by Owen Wyn Owen and restored ( or should that be completely reconstructed) into it’s present impressive condition.

The other aero engined cars on show included the SID Delage featuring a 27 Litre Hispano Suiza V12 engine, a 1921 GN Parker fitted with a Cirrus Hermes engine and a 1921 GN Vitesse fitted with a V8 Curtiss engine.

All fabulous cars with ludicrously lavish lashings of bhp but with commensurately diminutive mpg. For these particular cars “gpm” is a more sensible measure of fuel “economy”!

Common as muck and boringly bland these days but there was a time when BMW made very nice cars. The pre-war 328 is a real favourite of mine – as is the CSL (especially in Batmobile guise) and the beefy but still practical 2002 Turbo.

Citroen were a featured manufacturer this year so it’s hardly surprising that they had good range of historic cars (and a corrugated Camion) on display.

Citroen were an incredibly innovative car manufacturer giving the world the first mass produced front wheel drive car with their pre-war Traction Avant and then typist war delights of hydraulic suspension and brakes with the DS.

The Citroen SM Maserati still looks futuristic now so just think what an impression it made when it first hit the autoroutes in the ’70s?

Lamborghinis were much in evidence with a particularly pleasing number of Miura’s, a light absorbing black Uracco (hence no photo) in the Coys auction, a couple of Diablo’s and Countachs plus some more modern Lambo monstrosities.

The lurid green and the orange Muira’s really stood out and it was interesting to see the incredibly compact transverse V12 engine installation in the green Miura with it’s rear-end removed.

The Miura was an incredibly ground breaking car and fully deserves it’s title as being the worlds first Supercar.

This Maserati Sebring was just beautiful. From a period when Maserati’s were hand built works of art.

Mercs from the ’50s and ’60s were rather special. The 300SL in Gullwing or Cabriolet form is incredibly beautiful. I love the vertically elongated lights on the 300SL Cabrio but the Gullwing still takes the biscuit in terms of overall presence and design brilliance. Sadly – I’ve never been able to get excited about the 190SL. It looks of its period rather than the 300SL which transcends time.

Thankfully – my predilection for all things Porsche was reasonably well catered for with a good smattering of 911’s/912’s, a couple of 356’s and a rather lovely 550 Spyder.

This Speedster was particularly nice.

The 911s and 912’s held their own however with some very nice cars on display. The 912 Targa in Olive Green was interesting as this was the original colour of the Yellow Peril when it came out of the factory. Every now and again I think – I should have kept it to its original colour. Then I wake up from my nightmare and all’s well!

The RUF 2.4L Flatnose (Flachbau) was but unusual and the bright (Viper or Condo?) green Oelklappe 2.4S was arresting but my favourite was the 2.2S in a rathther fetching shade of Grey White (Weissgrau). Mechanically – the 2.2S should be pretty similar to my Yellow Peril.

Incidentally – old copies of the Porsche Club GB magazine were being used to entice visitors to join the club and I was delighted to see the edition featuring my car (the Yellow Peril) as the cover shot on display. Porsche Club – where’s my commission?

Porsche Club GB went for a minimalist approach on their stand this year by featuring a single car – this really great 550 Spyder. The nice thing to note is that this car is no trailer queen – it’s a no nonsense car doing what it was built to do – RACE.

Ed Pike (PCGB London Region organiser) was telling me that she’s hoping to get the owner to bring the car along to one of the Ace Cafe Porsche nights . It’ll definitely be the star attraction.

Classic car shows can have a habit of regurgitating the same makes and models (and sometimes the same cars) year-in, year-out so it’s always nice to stumble across some rarities that you’ve never seen before in the flesh or sometimes never even heard of.

This year – it was nice to see a trio of rare Mini-based cars in the form of the Ogle 1000SX, the Deep Sanderson DS301 and the Unipower GT. David Ogle (founder of Ogle Design) was responsible for the Ogle 1000SX and his company went on to design the Raleigh Chopper and Reliant’s Scimitar and Robin.

The Deep Sanderson was the creation of Chris Lawrence and it was actually raced at Le Mans and other famous European circuits.

The Unipower GT was designed and built by Ernie Unger and Val Dare Bryan at their truck manufacturing facility in Perivale, West London. These lightweight and aerodynamic cars were also enthusiastically raced.

I have a real penchant for early Zagato designs but have to confess to being less keen on their modern creations. The show provided examples of cars at both ends of the Zagato design spectrum ranging from the sublime Aston Martin DB4GT Zagato to the rather strange Aston Martin Vanquish Zagato Shooting Brake.

Here a few more cars that caught my eye:-