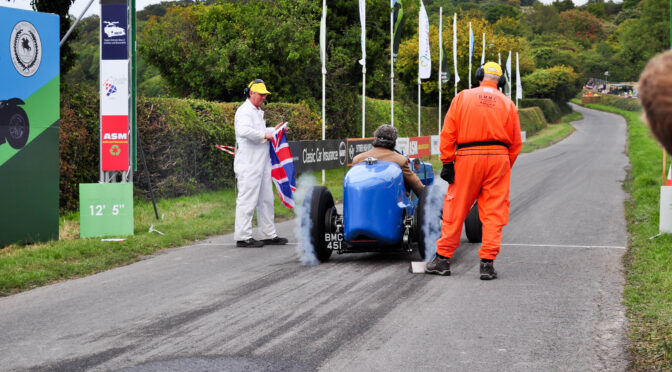 Following a really enjoyable visit to Prescott earlier in the year I had little hesitation in deciding to join DDK mate Kirk on a visit to Kop Hill Climb.

This annual revival has grown into a tremendously popular weekend gathering of cars, motorbikes and petrol-head enthusiasts of all shapes, sizes, ages and states of repair.  The sheer variety of motors was enormous with everything from 1904 Veteran Cars through Pre-war land speed record behemoths to the latest Tesla. A great, easy-going but tremendously well organised event. Don’t miss it next year!

Along with many other British racing venues  – Kop Hill Climb came to a grinding halt in 1925 when, following a relatively minor accident which injured a spectator at Kop, the RAC banned all forms of motorsport on public roads.

It wasn’t until 1999 that Kop was revived by the combined efforts of the Town Council and local car clubs as a non-competitive annual event with all profits going to local charities.

Whilst Kirk had pre-booked a place in the paddock for his lovely 911 2.2S –  I decided quite late-on to attend and just ended up paying a very reasonable tenner at the gate.  This still however resulted in me and my 911 2.2E being ushered into a special area for interesting and historic vehicles allowing me to park in between an MGA and an AC Cobra right next to the hill. Result!

Crossing the road from the hill-side car park to the paddock opened up an enormous vista of sumptuous automotive machinery. There were cars and motorbikes I’d never even heard of let alone seen before so I was a very happy chappy. Here are some highlights:-

I’ve always associated the name Brough Superior with the rare and highly collectible Nottingham built motorcycle much loved by Lawrence of Arabia (and a bike on which he met his untimely death) but I was surprised to find not one but several cars of the same name – not bad for a total production run of just 85 cars built between 1935 and 1939.

Brough Superior cars featured a Hudson chassis fitted with Hudson engines starting with  a 4L straight-8 and later followed by a 3.5L straight-6 with or without supercharger. In 1938 a saloon car was also built using a 4.4L Lincoln Zephyr V12 engine but sadly no others of this type followed.

Here’s another company best known for it’s motorcycles rather than cars but there were BSA cars in abundance at Kop thanks to the owners club arranging their national get-together at this particular event. Kirk and I had a very informative chat with one of the BSA Owners Club members so we now know an awful lot more about this very enthusiastically supported car marque.

BSA manufactured 3 and 4 wheeled cars with rear and front wheel drive of various types between 1907 and 1912 in Coventry before moving to Birmingham where cars continued to be made until 1939. In 1910 – BSA purchased Daimler to bolster their car manufacturing business and this was followed in 1931 by BSA’s acquisition of Lanchester but neither venture was particularly successful and car production of BSA cars ceased at the outset of WWII.

To say that this wonderful historic Model T racer stood out is an understatement. Dating from 1911 this car was essentially stripped down to its chassis by A.E. George before it’s 2892cc engine was modified and a centrally placed seat was fitted to go racing at Brooklands, the beach at Saltburn and other early racing venues.

The transformation to “Golden Ford” was completed by fitting a unique polished brass body after which the car achieved further race successes including a another win at Brooklands in front of Henry Ford himself.

Discovered in bits on a farm by current owner and Model T Ford expert Neil Tuckett – the restoration of the car was featured in an episode of the Salvage Squad television series. It’s well worth a watch!

The more I see Frazer Nash cars at various events – the more I love them. The beautifully prepared Norris Special looked particulalrly stunning and it went pretty well too – managing to smoke  its rear tyres on the start line.

It is one of 2 cars built just after the war by brothers Frank & Jack Norris utilising pre-war Frazer Nash race cars into which they fitted 1 1/2 L Alvis OHC engines. As the engines were originally from front wheel drive cars they were fitted back to front in the specials to enable them to connect up to the rear wheel chain drive mechanism.

Looking at the chunky chains in one of the shots below – it must be extremely disconcerting for the driver to know these are thrashing round at high speed directly under his bum!

This cracking little car looked and sounded fantastic. Owned and enthusiastically campaigned by motoring journalist and broadcaster Simon Taylor – this car has an interesting history.

It started life in 1950 as a 2.0L Alta engined works Formula 2 car raced at the time by an up and coming driver called Stirling Moss and at other times by Johnny Claes and Rudi Fischer.

After a reasonably successful early racing career albeit with the odd crash – it was fitted with cycle wings and sold in 1955 by HWM and featured in the film ‘The Racers’ driven by Kirk Douglas.

After being crashed again during the making of the film – the wreckage was bought by Tom Carstens a Seattle based racer and he was responsible for completely rebuilding the car fitting it with the then new small block chevy V8 engine which was specially tuned by Edelbrock. Complementary body, chassis and drive train modifications were carried out by Ted Hallibrand.

The lightweight body/chassis and powerful engine make this a very potent little car and it was great to see it spinning up its rear wheels on the Kop start line and snaking up the hill as hot rubber gripped the tarmac.

Old Jags are always a joy to behold but whilst I still love the MkII, C, D and E-types  – my preferences have been gradually shifting towards older road cars in the form of XK120s and even the Jag SS100 which have a real elegance and purity of design about them.

Jensens On The Button

It was great to see a small gathering of Jensens in the paddock and on the hill. The 541 Deluxe, CV8 and Interceptor pictured below provided a potted history of Jensen models. There were even a couple of Jensen Healey’s which I was frankly never a big fan of.

The 541 with its curvaceous fibre glass body and Austin truck engine looks quaint but is still very stylish. The V8 engined CV8 has slightly more unusual but no less handsome fibre glass bodywork but the steel bodied Interceptor with it’s vast glass tailgate looks really elegant even when alongside more modern machinery.

Jensen were very astute in using Carrozzeria Touring of Milan to design the Interceptor’s bodywork and early bodies were even constructed in Italy by Vignale before production was fully shifted to the Jensen factory in West Bromwich. Interestingly – the Jensen factory also built Big Healeys and the Volvo P1800.

With such a wealth of interesting cars to see – I’m afraid I neglected the lovely motorbikes. Apart from a collection of great old British marques there was an amazing Moto Guzzi combination (with dickey seat) and a few superb old BMWs.

I’m still tempted to buy an old bike to tinker with but I’m less sure about my skills in safely riding one.

Pre-War Beauties (but which War?)

There was a fantastic range of Pre WWII and even Pre-WWI cars on show from land speed record cars, racers and road cars from all corners of the globe.

A large proportion of these were taken up the hill which made a great spectacle for the spectators and was obviously a source of immense fun to their owners. It just makes me want to go out and start a Pre-War project. All the ingredients I need are a decent pre-war chassis, a mad & stupidly massive aero engine, a vestigial alloy body, flat cap & goggles……Sorted!!!

Henry Segrave & his Theory of Safety at Cross-roads!

Going back to one of the brave drivers who used to race at Kop between 1910 and 1925 – there’s a lovely story about Sir Henry Segrave who tragically died aged just 33 on 13th June 1930 as a result of his Miss England II speedboat colliding with a submerged log immediately after setting a new water speed record on Lake Windemere in Cumbria.

In around 1927 – having spent so much time in the fast lane, Segrave came up with a wonderful theory on how to most safely navigate cross-roads which went as follows:-

So in short – Segrave’s reasoning was that the faster you drive across a cross-roads – the safer you are! It’s heart warming to see that so many cyclists and drivers in Central London still follow Segrave’s faultless logic………. regardless of traffic lights!!!