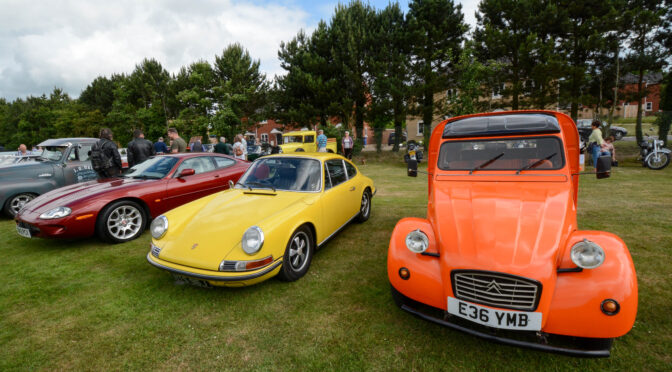 Locally organised and vehemently supported get-togethers of all sorts have given rise to what in some instances have become major events.

Just look at how Classic Cars meetings have mushroomed into massive national or even international events and consider the tiny Pilton Pop, Blues and Folk Festival attended by 1,500 people in 1970 which morphed into the glorious musical extravaganza that is Glastonbury!

Holton Classic Car Day on Sunday 17th June is a classic example of such great village events and who know – in years to come it might become the Pebble Beach or Villa D’Este of deepest, darkest Suffolk!.

We were enticed to visit this event by old friends Hilary and Rob who we’d recently rediscovered after a 25 year gap through the wonder of that occasionally useful tool that is Facebook.

At this point – I just want to state for the record that despite the fact that Hilary is responsible for me meeting my wife (we first met at a party held by Hilary at her then flat in Finsbury Park many many years ago) – I don’t hold it against her! Well – not all of the time!

Our weekend trip to Holton kicked off with a cruise through the Essex and Suffolk countryside in the Yellow Peril during which I realised during the trip was in dire need of a clutch change. Having survived 20 years worth of high-rev abuse – the clutch owed me nothing!

On our way out East we called off in the rather beautiful and ancient town of Lavenham which has an amazing abundance of old timber framed houses.

Profits from the wool trade in the 15th and 16th centuries resulted in some fantastic buildings being constructed – many of which survive to this day. Well worth a visit!

As we approach our overnight stop-over in Bungay – we came across the Norfolk & Suffolk Aviation Museum at Flixton but it was sadly shut.

Despite this – we were ably to stop and get a few photos of the aircraft on the perimeter of the museum and also chat with a couple of aircraft, classic car and classic motorbike enthusiasts about my old 911 and their old BSA.

Must attempt to visit the museum when it’s open.

Fully fuelled with Suffolk pork and chicken products, courtesy of a towering inferno of full English breakfast protein at the Bungay hotel we stayed in – we attempted to set off for Holton only to encounter a sticky starter motor!

Rocking the car back and forward in gear seemed to clear up the stickiness and we were soon blasting down the road to Holton.

Coming from a central London borough – I can’t hep but admire the superb organisation that rural events deliver as we were efficiently pointed towards the Classic Car field.

We parked up in our allotted apace as an equally lary and loud (colour and noise) and similarly air-cooled orange Citroen 2CV pulled alongside.

Later in the day – the owner of the 2CV regaled us with the great story of how he’d rescued it from a scrappy and restored it to be his daily driver around the country roads. The deceptively simple mechanics of the 2CV are actually very clever and the car offers great “driving on the door handles” fun when flung around country lanes.

The sight a a mighty pre-war Bentley entering the field caused a great stir of excitement and people were soon milling around it as it lumbered itself into it’s allocated parking place.

Irked by his own cars being soundly beaten by Bentleys at Le Mans (the ultimate test of endurance racing) – Ettore Bugatti described Bentley as “the fastest truck in the world”.

Standing next to one – you can perfectly understand this description as everything about the car is massive and heavy. Even the beautifully engineered supercharger perched ahead of the radiator grill screams of heavy engineering.

With few exceptions – I’ve never been a fan of American vehicles but I do like some of their engines and most especially the Chevy V8 which has successfully graced many European chassis – I’m thinking Bizzarrinni, Bristol, Facel, Gordon Keeble, Jensen, Lola and Monteverdi to name but a few.

Click on See more on Euro/US Hybrids for more.

Big Chevy trucks are quite imposing and it is noice to see them pressed into action in the UK as proper workhorses for small businesses. 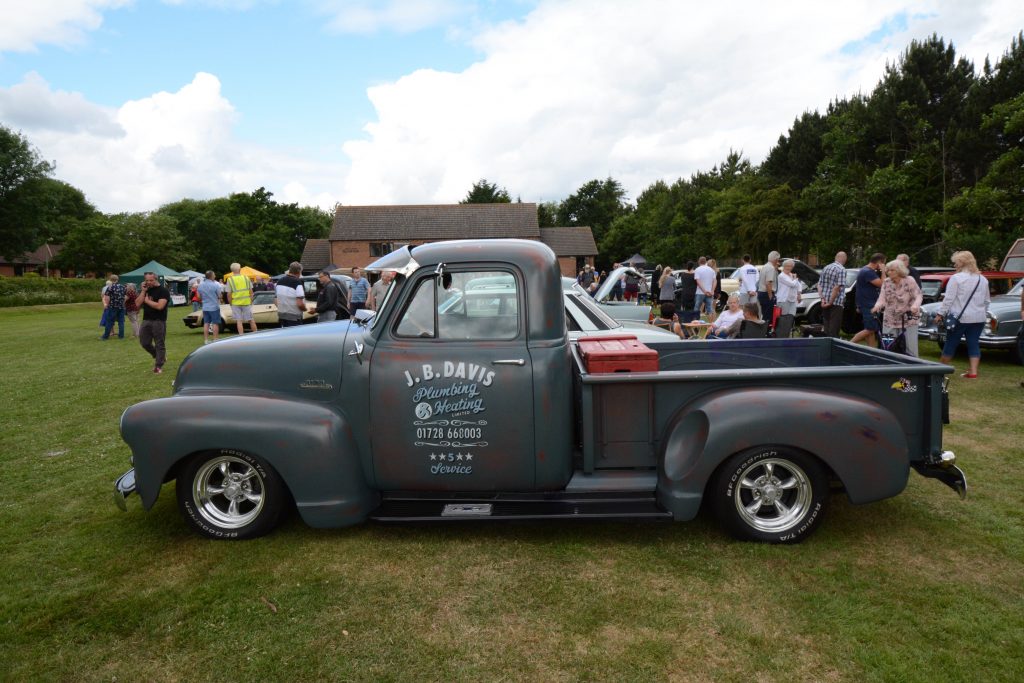 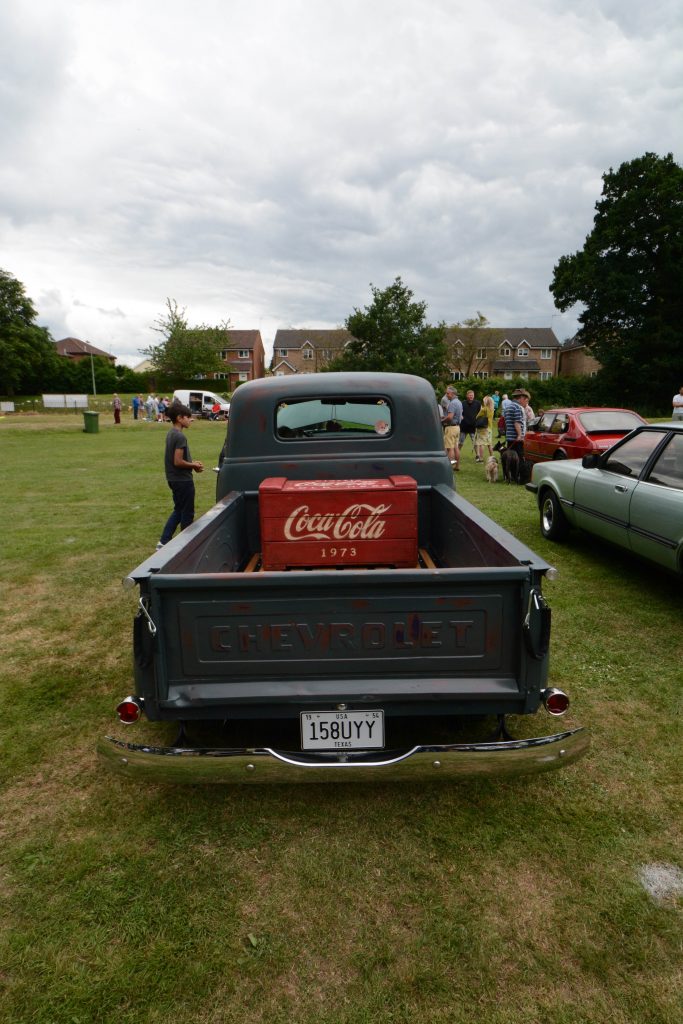 Unfortunately – creation of the car bankrupted it’s creator Andre Citroen but this did not prevent the company continuing after the war to build these cars and they were even built in Slough under license in right hand drive form. 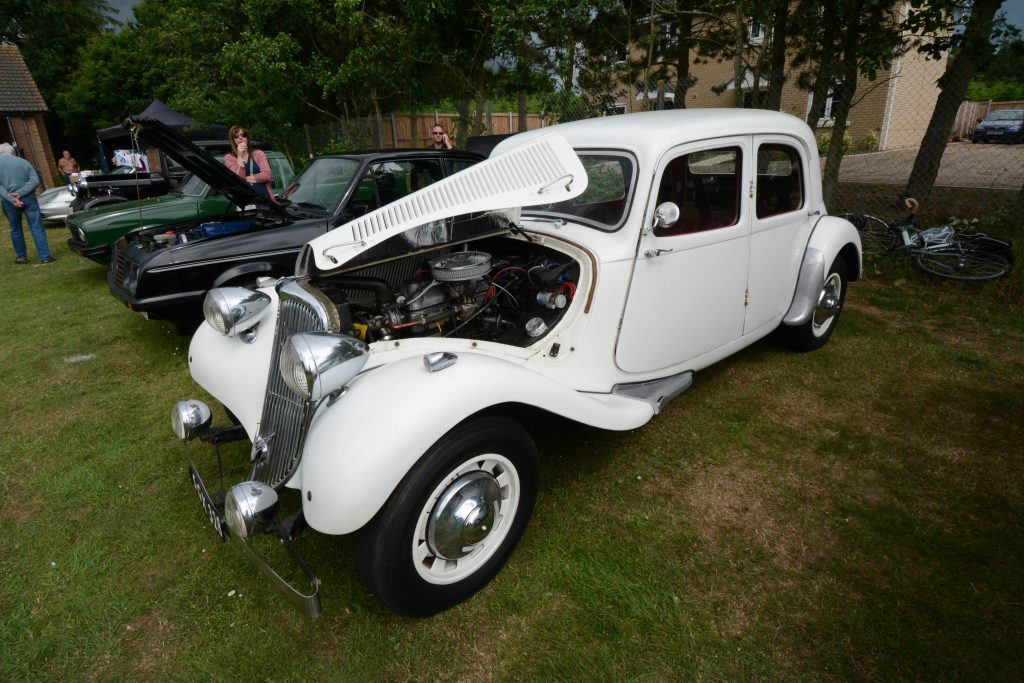 Sharing the same body shell as the MkII Jag – the Daimler V8 and later V8 250 (with the thinner bumpers) are great cars.

Edward Turner who also designed the Triumph motorcycle engine created a fantastic 2.5 Litre V8 which perfectly suited the MkII body-shell for burbling around the countryside.

The more brutish 3.8 Litre straight six engined MkII was much more popular with gangsters looking for a god getaway car but the Daimler version was more genteel. 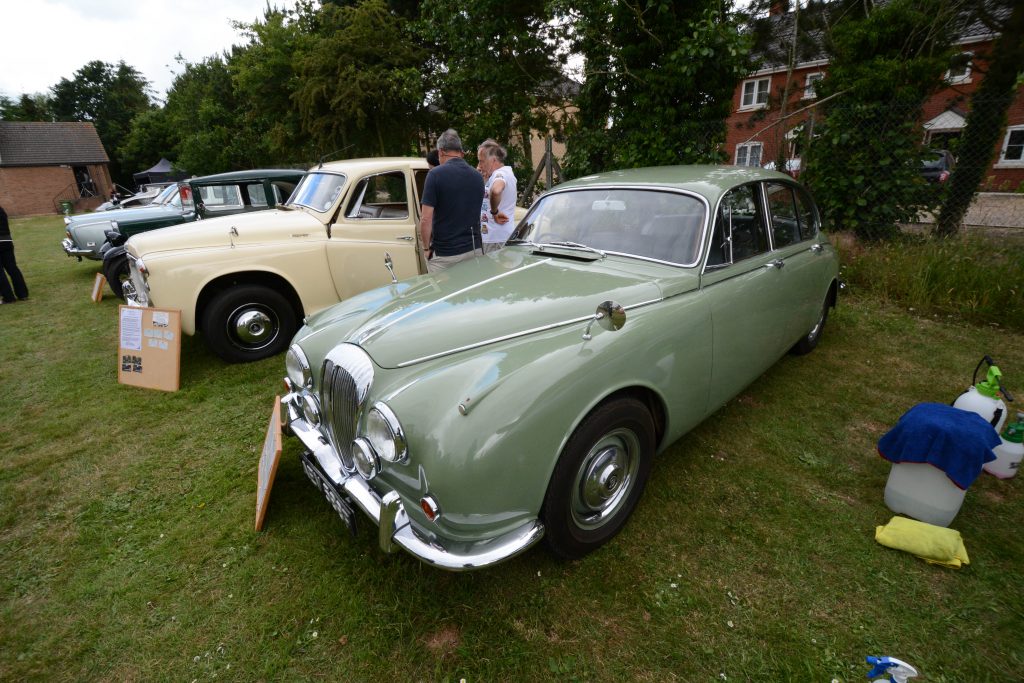 Given the number of military bases around East Anglia – I assume there must be quite a few old Jeeps kicking around. These indestructible motors are always in demand especially for historic events such as Goodwood Revival and I imagine many others. 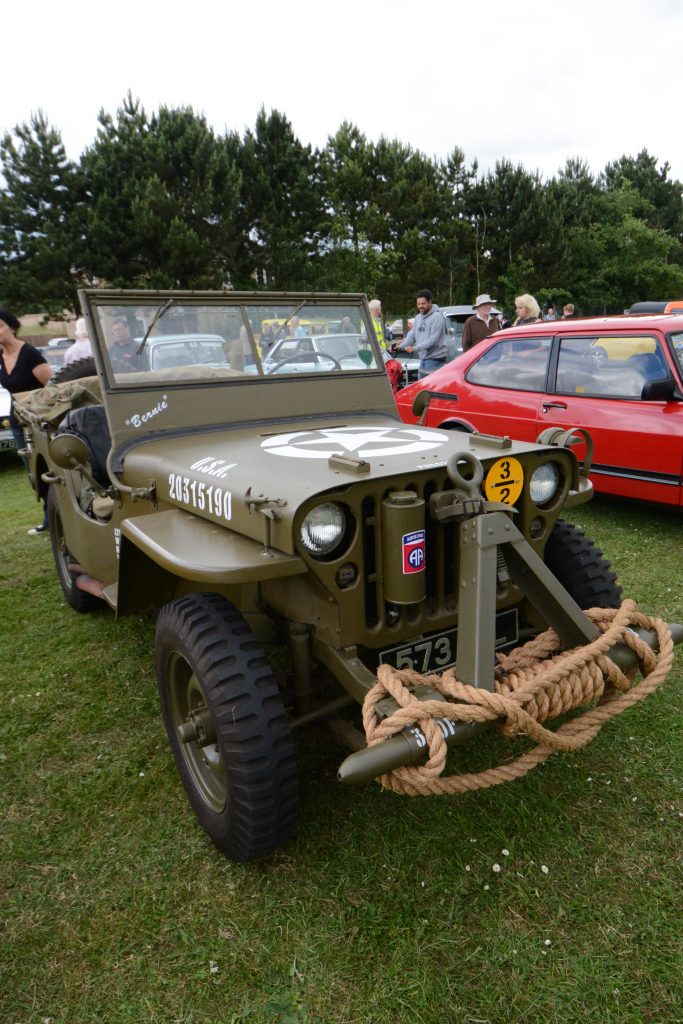 I have a yearning for a pre-war or pre-war engineered car and the little;e MG TC would fit the bill. Much loved by American forces based in the UK during WWII – many little MG’s made their way back to the USA and this started the post-war export boom of British sports cars from Austin Healey, MG, Jaguar, Triumph and many other manufacturers supporting economic recovery.

This little TC was in great condition and must be a hoot to drive. 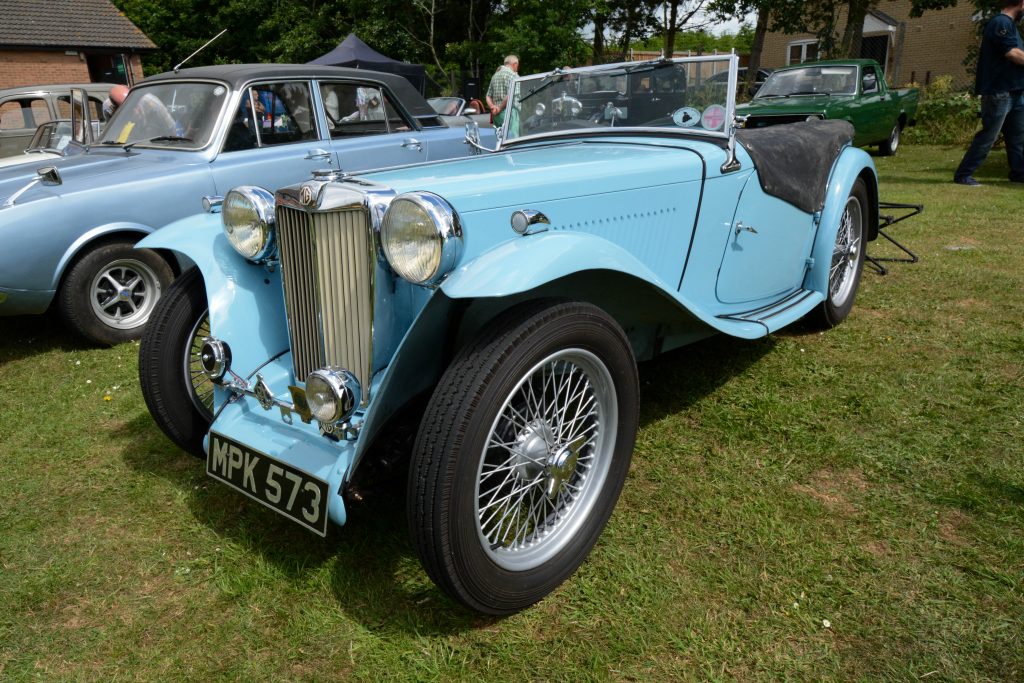 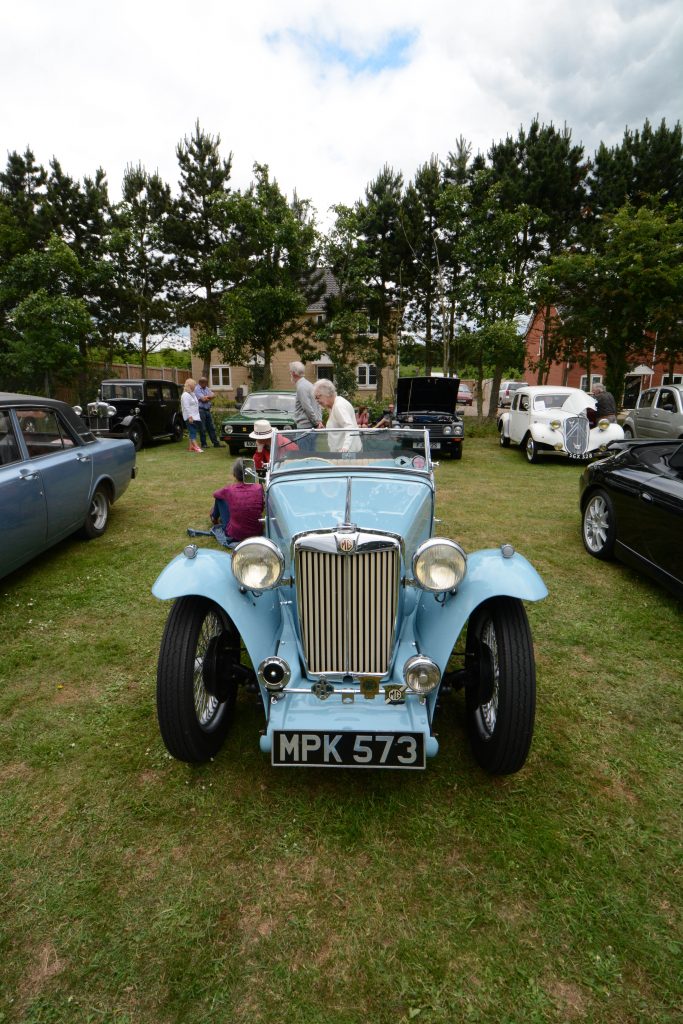 This better-than-new Moggie Traveller was simply astonishing in terms of the quality of its paintwork, woodwork and trim. Chatting with its proud owner and restorer – it transpired that he was a retired bodywork specialist who was keeping his hand-in with his own restoration projects.

He explained that he’d recently sold another restored Morris Minor (a saloon) to a senior executive at Aston Martin who’d bought it as a present for his wife. I would imagine it’s not entirely easy to impress someone like that!

Good to bump into a another older Porsche at Holton. Like me and my old 911 – the owner of this 914 had owned it a long time and was doing what should be done with all old Porsches – he was regularly driving it!

We’ll hopefully meet up again at one of the many Porsche Club events. 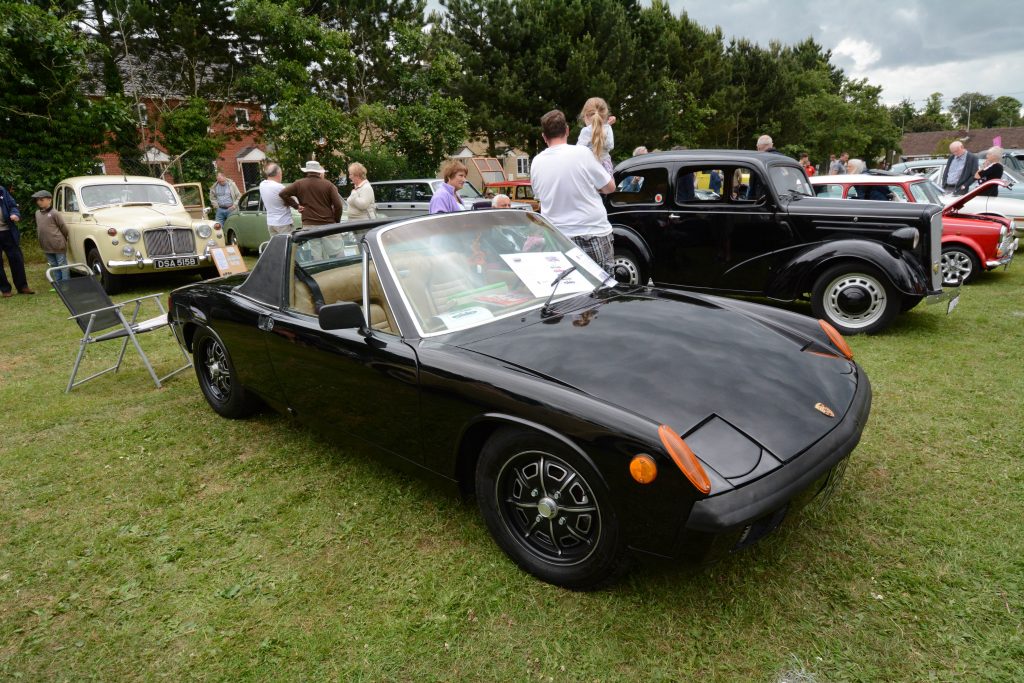 Sadly – my wife’s really bad hay fever necessitated an early return to London after a very enjoyable break in the East Anglian countryside made all the more special by meeting up with old friends!

Must plan more visits to local events in the future as you just never know who or what is going to turn-up!