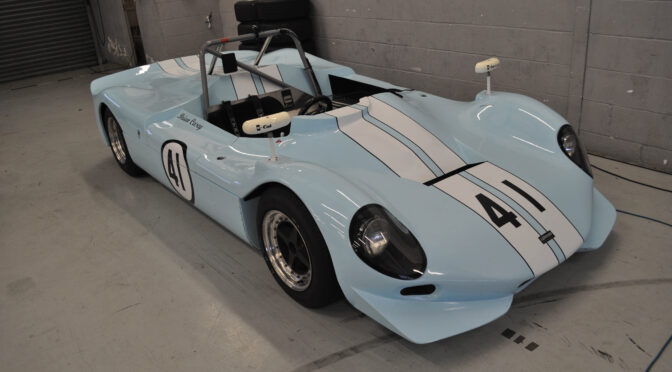 Question: What Do You Do On A Damp Saturday in Autumn?

Answer: Drag your now beautifully running 911 out of the garage and head out to a Historic Club Race Meeting (other classics will do if you don’t have a 911).

My 911 is now running beautifully after diligent further fettling by Steve Winter at Jaz Porsche. Consequently, I’ve been looking for reasons for a bit of a blast and a trip up to the HSCC event at Silverstone was an obvious choice.

The weather forecast was grim but knowing that Silverstone has it’s own micro-climate which defies logic and predictions of the Meteorological Office I thought sod-it, just go and see how things turn out. The clincher was the promise of a coffee, chat and inspection of a fellow DDKer’s 911 2.2S on my way back to London.

My drive up to this HSCC event at Silverstone was unremittingly wet. Upon arrival I parted with a very reasonable £10 to get in and within seconds of parking up opposite the Paddock Cafe I was greeted by jolly race marshals and fellow enthusiasts just happy to see other like minded people dragging themselves there despite the weather and rather than staying in bed on such a damp day.

In London –  strangers engaging you in uninvited conversation leads to the natural assumption is that they’re axe murderers or worse. Thankfully just a few miles outside of London – normality prevails with fellow punters, drivers and salt of the earth marshals chatting to all comers.

After spending the soggy Silverstone morning mooching around the garages and ogling some of the slippy/slidey qually runs from the pit wall – I asked a marshall where I could buy a race programme. “Haven’t a clue – here have mine” was the response as he thrust his copy into my hand. What a star! Then the rain stopped – excellent!

I was hoping that there would be some decent cars to see at what is a relatively late race in the season and I wasn’t disappointed. Here are some that caught my eye:

Ginetta have produced some great cars over the years and thankfully they still do. Originally established in 1958 by the four Walklett brothers in Woodbridge, Suffolk – the company has gone through various changes of ownership and different manufacturing locations.

I particularly like the original G4 which was like a scaled down E-type but it was successful in its own right in the hands of racers such as Jim Clark.

The Ginetta G4 and G12 were great little race cars but I really liked the Ford 4.7 Litre V8 engined G10.

What a beast of a car! Designed and built by Frank Kurtis through his Kurtis Kraft company in the 1950’s it just exudes “muscle” with its chunky body/chassis sitting on enormous wheels, shod with hefty high profile tyres. The car is powered by a beefy sounding V8.

The drain-pipe exhausts emitted a great rumble as it trundled around the track. I’m guessing it’s not a light car by modern standards but it looked like it was really fun to drive.

Must find more about these beasts as I’ve seen a few racing over the years.

Lenham is an interesting company. Founded in 1962 by John Booty and David Miall-Smith (joined by Peter Rix in 1968) – it specialised in producing fibreglass panels and alternative streamlined bodywork for the likes of Austin Healey and MG.

Demand gradually declined as newer models came out but when old “Spridgets” gained classic status – CCK acquired the moulds and rights to manufacture and sell Lenham panels. So – if you have a (t)rusty old Spridget you can still convert it into a streamlined fastback Le Mans GT!

Through a link-up with Roger Hurst Hurst – a company offshoot (Lenham Hurst Racing) came into being and this resulted in the creation of some successful racing cars (including those pictured below).

I once toyed with the idea of buying a Lotus/Caterham 7 in kit-car form but a number of other Lotus models have also been of interest.

Not sure why there are  so few Europa’s around these days but the blue one pictured here was absolutely immaculate.

One of the very first cars that got me interested in interesting cars was a Marcos. I was around 10 years old standing on Pow Street in Workington when a low slung black Marcos drove past. It was like nothing I’d ever seen before.

Here’s a selection of some other saloons and sports cars being raced at the HSCC event (and some just in the car park).

And in a similar vein – here are some of the great single seaters providing entertainment on the slippy Silverstone track.

I have a soft spot for TVRs as I owned and rebuilt a Vixen S2 after experiencing a similar one owned by my mate Mick. The 1.6 Litre Ford Cortina motor powering our cars always looked a bit lost under that enormous fold-forward bonnet. No such problem in the Griffith in which a  chunky 4.7 Litre Ford V8 very neatly and tidily nestles in the engine bay.

The short wheelbase of the Griffiths mean that with 271 bhp of power on tap from the Ford 289 HiPo Windsor engine – they’re very easy to spin but in the racing I saw – all of the Griffith drivers skilfully managed to keep their cars pointing in the right direction so much respect to them. I managed to spin my Vixen by accelerating over-enthusiastically off a roundabout in Newcastle!

I spotted a green Tuscan V6 as well. I quite fancied upgrading to one of these or to a 2.5 Litre Triumph TR6 engined variant around the time I had the Vixen but I have to say the V8 cars are what I really aspired to. Way too rare and pricey now I would think!

I went round the TVR factory in Blackpool on a couple of occasions in the late ’70s – it’s such a terrible shame that the company folded. Wouldn’t it be nice if some philanthropic folk could revive it? There are rumours that a British syndicate are planning to do just that! I wish them the best of luck.