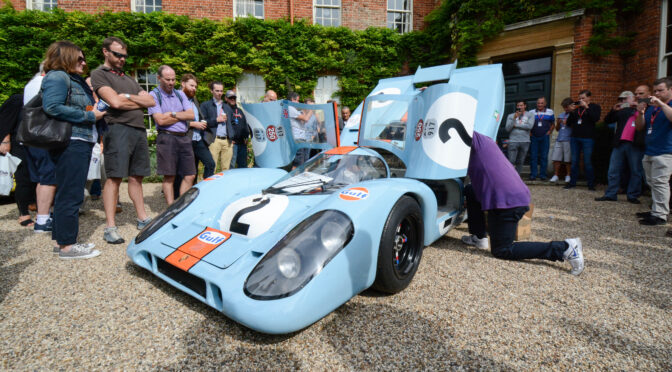 A two year wait since the last Hedingham Porsche bash and the limited availability of my old 911 this year (due to further improvement work) left me with a major sense of anticipation for this year’s Classics At the Castle event.

An early, sunny Sunday morning start and a thankfully absent intermittent misfire were positive omens for a good day out but this didn’t stop my usual jitters about whether I had the right day, whether any mechanical gremlins would thwart the trip etc. etc.

My fears were calmed when just beyond Stansted airport I swung my ’71 2.2E behind a lovely tangerine 2.7RS for a joyous two-car-convoy blast towards Hedingham! The start of a perfect day.

The organisation and format of Hedingham has changed from its last running in 2015.

Ticketing was efficiently managed through Porsche Club GB and parking for the various categories of cars (356s, Pre ’74 911s/912s and 914s, featured 911S models and modern Porsches (which I don’t like to talk about) was straightforward. 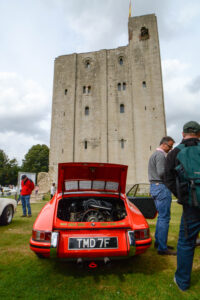 The occasional firing-up of particularly interesting engines (such as the glorious Flat-12 of the Gulf liveried 917) provided some aural delights BUT to my mind – the event felt a little flat without the parade of cars up the drive to the castle keep. It lacked this focus and I’d personally urge the organisers to reinstate it next time around.

That said – there were some lovely cars on show and I managed to meet up with a number of Porsche friends including my German mate Ansgar (plus his Mrs and baby daughter).

Ansgar runs the excellent Teil der Maschine old-timer blog in Germany and I hold him in great awe for somehow shoe-horning his 4 month old baby (in regulation front seat baby receptacle) AND his lovely, tall wife into the rear seat of their 2.4 911S Targa for their pilgrimage from Essen to Hedingham.

I’m minded of the Elbow song – “Grounds For Divorce”!

The wife and I both love 356’s and would dearly love to add one to our Porsche fleet – currently restricted to just one car!

When the Mrs found a Speedster incorporating a shortened version of her first name in the registration number. The sound of “It’s my car – sort it out” brought a  severe feeling of imminent heart attack!

Seriously though – I just love the fact that so many people bring out their wonderful and rare 356’s for other people to ogle and enjoy.

One particularly well used 356 (Molly Porsche) had not that long ago returned from the Samurai Hall in which it toured the breadth and length of Japan. It’s next international adventure is in Vietnam apparently.

It was lovely to see this 1960 356B Carrera Abarth GTL – restored by Andy Prill.

A beautiful streamlined re-definition of the 356 by Carlo Abarth.

As this year’s event featured “S” cars – these were a highlight of the event for me – especially the early pre ’73 cars as my ’71 E has been fully upgraded to “S” spec including engine, suspension, oil system etc.

The cordoned-off area for early 911S cars included an assortment of SWB 2.0L cars and 2.2L cars including the wonderful Pastel Blue LHD 2.2L S belonging to my mate Kirk.

It was fascinating to watch the notoriously complicated starting sequence of the 917 but it was worth the wait. There is nothing quite like the noise of a large capacity air cooled Flat-12!

Flachbau (flat nosed) turbo 911’s are rare enough but the Kremer Brothers variant is ultra-rare and highly desirable. This example was a delight to see.

I know nothing about this particular car other than it contains the following magic words:

Quite enough reasons for this car to be regarded as special!!!

Other than the ST – the 2.8RSR is one of my favourite looking 911s. Its expanded engine, pumped-up wheel arches and bigger wheels and tyres give it that wonderfully transitional classic early 911 muscle-car look that preceded the wide bodied 911 Turbo.

Sadly the girth of 911s was set for exponential growth from this period!

Martini colours really suit the RSR. This car is an accurate reproduction of the original Prototype Targa Florio RSR that was destroyed whilst racing. The reproduction was built by BS Mtorsport.

Beyond the featured “S” Models there were some great cars on display.

As ever with these events – there and are always some interesting cars from a rarity or race provenance perspective.

The Larrousse 911 ST was particularly striking in it’s psychedelic yellow and red colour scheme. This car was famously raced in the Tour de France and its success was in part based upon Larrousse bribing the mechanics who prepared the car with bottles of champagne for every kilo they could shave off its already light weight.

This encouraged the mechanics got the car’s weight down from 800kg to 780kg which resulted in phenomenal power to weight ratio and made it the lightest 911 ever built by the factory. It was meticulously restored by Historika.