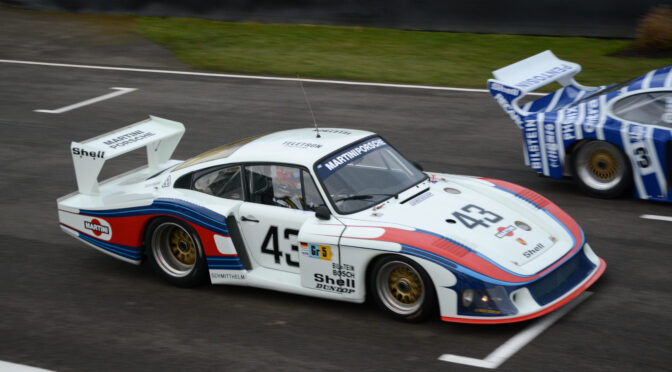 There’s a time and a place for snow and mid-March at Goodwood ain’t it!

Of all the bloody weekends to dump snow on the delicate and fragile South of England – it had to be the weekend of the Goodwood 76th Members Meeting!

Oh well – at least I can comfort myself in the knowledge that  the Siberian origins of the cold air precipitating the snowfall can be blamed on Vladimir Putin!

Whilst en-route to Goodwood early on Sunday morning, my mischevous Sat-nav decided the journey should include a winter snow-and-ice rally stage in and around Haslemere.

As the few other drivers daft enough to venture out, skidded and slided to a halt on the hilly bits – it was left to my trusty FWD Honda Civic Oldgitmobile to slither by them.

Apart from a few sideways moments to avoid extra-dopey, cold-numbed pheasants and the odd  cannon off  the kerbs – the old girl delivered me safely to the slippy/slidey mud that is Goodwood’s car park (aka – a field)!

Upon entering the circuit I was presented with a bleak panorama of of snow and greasy grey tarmac under a heavy monochromatic sky. This was only enlivened by a static cavalcade of assorted classic cars lined up in anticipation of an early morning demo run around the track.

Few spectators witnessed this demo run as all seemed to be hell-bent on seeking out the warmth generating benefits of hot coffee and bacon sarnies.

When a large sweeper truck hove into view – presumably to remove gravel strewn onto the track by errant competitors in Saturday’s snowy races, I thought it might actually be a gritter or snow-plough as this would have been far more appropriate given the conditions!

As I wandered towards Goodwood’s famous paddock sheds – it was spookily quiet. The sub-zero temperature was obviously keeping mechanics, drivers and owners under their duvets.

The silence was all the more strange given the spectacular nature of the cars housed in the sheds and the dusting of snow on these sleeping beauties did not bode well for what was meant to be a day of fast and furious racing.

Talk about mad dogs and Englishmen going out in the midday sun – there must be a sub-zero counterpart to this song – something along the lines of “Mad classic car drivers, mechanics, spectators, marshals and photographers go out in arctic conditions to suffer hypothermia and acute frostbite all in the name of misplaced classic automotive enthusiasm!!!”. OK – I concede, it doesn’t have quite the same ring to it as the original song.

As the morning wore-on – a number of cars were fired up in readiness for their particular races and my concerns over whether the day’s full racing programme  would be going ahead gradually dissipated. The only casualty on the day was the classic motorbike race which had to be cancelled due to the greasy nature of the track. Attempting to run it would have simply been too dangerous. Why wreck precious bikes and damage riders if it can be avoided?

Quite a mouthful to describe a race involving a wealth of very special cars. The immediate pre-war and post-war years constituted a fantastically energetic period of automotive design and innovation. Leading up to WWII –  the German behemoths (Mercedes and Auto Union) vied for dominance, battling it out on the world’s race circuits.

Competition came from the old racing world order in the form of Maserati, Alfa Romeo and Bugatti but there were also smaller companies such as E.R.A. who put up a great fight. Last but but least however were a bunch of eccentric one-off specials featuring weird and wonderful modifications or combining production chassis with ludicrously large aero engines.

These characterful cars were celebrated in this race.

My particular favourite was a 1930 Amilcar with a 12 Litre V8 Hispano Suiza fighter aircraft engine shoe-horned into it. I’d previously seen this car perform successfully at Prescott Hill Climb so it was nice to see how it fared on the track.

I vividly remember a brief chat with the owner in the paddock at Prescott. As the car was original powered by a tiny little 4-cylinder 1.5 Litre engine – I enquired if the 12 Litre V8 wasn’t a little large for the car? The owner smiled wryly and replied – “It’s just right”!

Other cars followed a different modification route such as adding a wheel which might sound odd but when you start off with just three wheels – this is quite a radical step! The 1929 Morgan RIP Special was one such car.

Interestingly – quite a few of the cars were based upon cycle-car technology i.e. with the rear wheels being chain driven as the lack of heavy differential and rear axle delivered a much better power to weight ratio. This was of particular importance in some of the motorcycle engined cars.

I have to say that the thought of oversized bicycle chains thrashing around beneath one’s posterior to transmit sometimes awesome power to the rear wheels would be a bit of a concern to me. Bravery or perhaps lunacy are obviously prerequisites for Special drivers!

So what constitutes “Special”? Well – the cars had to be loosely based on production cars but the regulations only required the body  shell, bonnet, doors and boot lid to broadly retain the same shape as the original. Beyond that – the manufacturers were free to use different materials for the body panels, introduce massive wheel arches, enormous wings etc., etc., etc.

It was an open invitation from the FIA to the participating manufacturers to run riot and the result was some of the most outrageous sports cars ever built.

Porsche for instance looked closely at the rules around headlights. As there was no requirement to retain them at the same height –  they were able to place them in the front spoiler and lower the front wings to create their wonderful Flachbau (flat nose) front end for the 935. This feature was offered on their production Turbo models.

Other manufactures such as Lancia, Ferrari, Ford and BMW opted for different strategies to create competitive cars but I have to say that none matched the 935 in terms of sheer brutality. There is no better sight than a 935 blattering past and then belching flames from its exhaust system as it throttles back to take the next corner!

Of all of the Special Production Cars – I have to highlight this one.

The Porsche 935/78 is one of the most famous racing Porsches and its nickname derives from the largely white bodywork and lang heck (long tail) bodywork to improve downforce (most especially for the Le Mans 24 hour race).

This car was the last of the factory evolutions of the 935 but other companies – most especially the Kremer brothers continued to make their own interpretations for track racing and even for street legal cars.

Moby Dick included some major engineering changes including the introduction of water cooled cylinder heads to reduce the risk of head gasket problems (a change that continued to be used in later Porsche race cars such as the 956 and 962). The engine capacity was also expanded to 3.2 Litres with  4 valves per cylinder. These mechanical changes boosted, or more accurately – twin turbo boosted, power to 845bhp.

The other key change was another great example of Group 5 rule interpretation by Porsche. The FIA had agreed to a rule change requested by BMW allowing the floorpan to be cut to accommodate the exhaust for this front-engined car. The rule had to apply to all cars and despite the 935 being rear engined – Porsche opted to cut away the entire floorpan and reposition it to enable the car to be lowered by a massive 10cm, thereby reducing drag.

Other changes included turning the gearbox upside down to make the drive shafts more level and extending the aerodynamic bodywork extensions on the front, rear and sides of the car.

All of these changes enabled the car to hit 228mph on the Mulsanne straight at Le Mans but sadly 1978 marked the end of Porsche factory involvement in racing their 935 model. Privateers continued to campaign the 935 in various guises in Group 5 and other racing categories until the advent of the glorious 956 and later the 962!