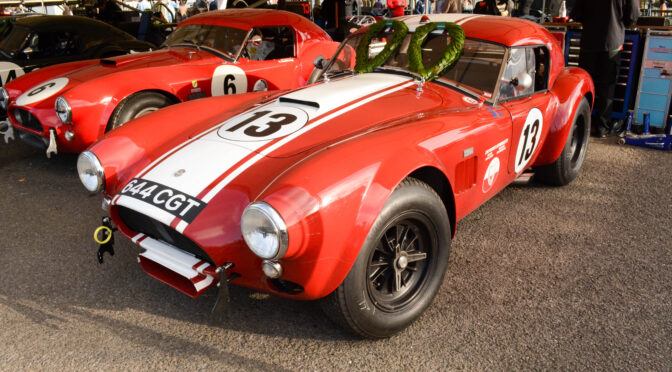 With so many cars to inspect at close quarters it’s really difficult not to be drawn to different sections of the paddock and miss key races.

In retrospect – I should have spent two days at Goodwood not just the one long day to cover everything. There’s always next year!

GT race cars from the ’60s and ’70s are particular favourites of mine. They were based upon contemporary road going sports cars of the period but were heavily developed for competition.

Jaguar E-Types in lightweight and lowdrag form have always been fast and competitive. AC Cobra’s with their rumbling Ford V8 motors are brutally quick. TVR Griffiths share the same Ford V8 engines as fitted in the Cobras and are equally quick.

The Bizzarrini 5300GT with it’s low-slung, almost mid-mounted 5.3 Chevy engine looks like it’s going fast even when parked in the paddock. The Ginetta G10 – also with Ford 4.7 Litre V8 power is a nice looking car if a little confusing with its MGB Roadster doors.

The diminutive Lotus Elans made up for their power deficit against bigger capacity competition through their sublime handling and last but not least the Ford Shelby Mustang GT350 is just a monster!

I was a bit remiss in not taking more shots of the lovely Listers gathered at Goodwood for the Scott Brown Trophy race. These great cars from the late ’50s and early ’60s are exciting cars to watch on track and their bodywork in “Knobbly” and more slippery “Costin” form is really evocative of that period.

Built by Brian Lister in his Cambridge factory and powered by Jag XK or Chevy V8 engines – they make a lovely noise and go like stink. Shame that the bulk of the cars are photographed from the rear on their way to the track but Lister rear’s are rather nice.

As the last race of the day – these great Sports Prototypes battled into the dusk. The grid contained some wonderful marques that were raced between ’62 and ’66.

The big field of Ford GT40’s shared the same designer as the Lola T70’s. Eric Broadley was temporarily enticed away from his Lola company to help Ford design a car that could exact revenge on Enzo Ferrari for pulling out of a deal with Ford to buy his company.

The GT40 was intended to triumph over Ferrari in sportscar races and most especially at Le Mans. This they did in great style thereby sticking two fingers up to Ferrari – much like McQueen did in his film Le Mans.

With job-done – Broadley returned to Lola to onward develop his T70 Spyders and to create the legendary T70 Mk111B. Interestingly – his Lola’s utilised Chevrolet V8 power rather than Ford.

I neglected certain race categories through my perceived necessity to focus on others. Another reason for attending for two days next year but I did capture odd shots of some other lovely cars racing in other categories which are worth sharing.

Here are a few including Yank Tanks racing in the Pierpoint Trophy Race, a unique Corvette based Cheetah, some glorious pre-war Alfa’s, Maserati’s, Bugatti’s and Delahaye’s and a fantastically painted BMW.