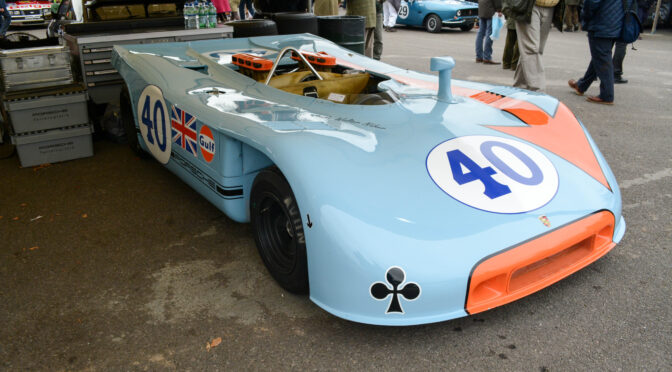 Upon reflection – setting off at 05:30 to be at Goodwood as the gates opened at 07:30 was a bit mad but it did give me time look at some wonderful cars in the paddock before it got too crowded and before the track action commenced.

This race for 1958 to 1966 Austin A-Series engined cars was brilliant as it showcased some wonderful and now rarely seen cars.

The grid was understandably dominated by Spridget based cars including Ashley, Lenham, Sebring and Speedwell but there were also other unusual marques such as Ogle, Turner and Rochdale.

I have to say – some of the Spridget specials looked fantastic – the bright yellow Austin Healey Sebring Sprite  was like a Ferrari 250GT’s in miniature form! The WSM Midgets and Sprites also looked great and the Rochdale Olympic had more than a hint of Porsche 356 about it. It’s worth remembering that in their day – these cars were very successful and won their class at such famous circuits as Sebring and Le Mans and this is reflected in their model names.

There is a revived interest in racing these little cars and this is made possible through an excellent support network of specialists (e.g. CCK Historic) and even revived manufacturers (e.g. WSM). They represent a cost effective way to go racing and offer tremendous enjoyment on an affordable race budget.

It’s also nice to see increasing interest in Edwardian Specials particularly on the race track. Last year’s Edwardian race proved to be a real spectacle with drivers of the front running cars flinging their hefty steeds around like men possessed.

The heady mix of vertiginous seats, vestigial bodywork, skinny tyres and a lack of seat belts and (in some instances) front brakes means that the driver’s of these beasts have to be incredibly brave, stupid or preferably both.

Joining the epic silliness this year was the utterly mad Fiat S76 Land Speed Record car affectionately known as the Beast of Turin driven by its owner/restorer Duncan Pittway. This car dwarfs the cars and people around it and when on the move it is an intimidating sight as flames belch out of its stub exhausts accompanied by a cacophony of thunderous banging and popping.

The Blitzen Benz looked like it had just driven off the film set of The Great Race or Chitty Chitty Bang Bang. With its Germanic eagle crest emblazoned on the side of the car I fully expected the driver to be sporting a helmet with a large spike sprouting from the top of it.

In 1911 – Bob Burman broke the absolute speed record (land sea and air) in this car at Daytona Beach with an average speed of 141.7mph over a mile.

The S.F. Edge Trophy race provided an entertaining  field of exciting Edwardian Specials and a host of barmy drivers.

During the 1990s – the GT1 series incorporated an interesting mix of heavily modified super cars (Ferrari F40 and McLaren F1) and purpose built racing prototypes with homologation by having a set number of road legal versions (Porsche 911 GT1).

Whilst they were not full-fat racing prototypes – these cars were extremely successful and even won outright at such legendary events as the Le Mans 24 hour race (Porsche GT1 and McLaren F1).

In the ’99 running of Le Mans, Mark Webber had to retire with an injured back after his brief flight and Peter Dumbreck in another Mercedes took off and somersaulted over a line of 30ft pine trees before the car landed on it’s wheels. Rather amusingly the first thing to happen when the emergency services reached him was the police breathalysed him as “he’d had an accident on a public road”!

Bridging the gap between earlier Group 5 and later Group C Sportscars – the 1970’s 3-Litre Prototypes fielded some exciting grids with cars from leading manufacturers of the day.

Cosworth F1 engines in detuned form were used in a number of different chassis whilst Alfa Romeo, Ferrari, Matra and Porsche came up with with their own engines and chassis to take race winning honours.

A friend and colleague recently gave me a book called Around The Circuit – which is a wonderful guide to historic Racing Car Transporters and Support Vehicles At Work. This celebration of motoring anorak ephemera focusses on the oft forgotten work-horses that carted race cars around. Thankfully – classic car racers and collectors have revived a number of equally classic transporters to fully recreate the period look and feel.

This lovely old transporter has a fantastic history having been originally commissioned from Carrozzeria Bertoletti by the Maserati team, then used by Lance Reventlow’s Scarab racing team before moving to Caroll Shelby to carry his Daytona Cobra’s finally coming back to Europe to be used by David Piper and Alan Mann.

It also has the distinction of having appeared in Steve McQueen’s film – Le Mans.