Bruce Cooper’s  establishment in Great Wakering (yon side of Southend) is a fascinating place packed full of the most beautiful metal known to man – in the form of early Porsches!

“Restoration” is a woefully inadequate description of the work carried out at Sportwagen. “Resurrection” of rare and rusty wrecks from the dawn of Porsche history is what they do!

I’m always in awe of how the Sportwagen team are able to reconstruct cars to pristine condition from what to any normal mortal would look like a pile of irredeemably mangled and rusty metal. 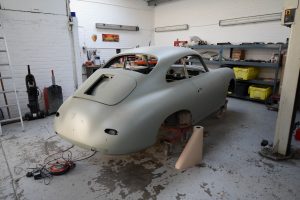 Bruce and his team are blessed with an abundance of that increasingly rare commodity – British craftsmanship. They are able to manufacture or recreate pretty well any component which is handy given that certain replacement parts (especially for 356’s) cannot be had for love nor money.

Recreating the beautiful curvaceous bodywork of 356’s is a particularly amazing skill given that there are no straight lines or bolt-on panels. 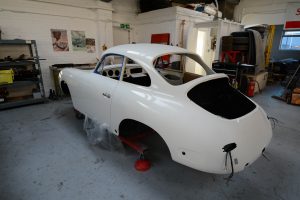 As an example – through my regular visits, I’ve been privileged to witness the gradual resurrection of one of the “first fifty” Porsche’s. These were constructed by the fledgling Porsche company in an old sawmill in Gmund in Austria during 1948-1949.

This particular jewel of a car is a work of automotive art which I sadly couldn’t photograph as the owner requires absolute privacy. Such was the state of decay of this car – a new chassis had to be recreated using the sieve-like original as a template. Bruce’s team have also had to re-create components for the car from scratch.

Even with more “modern” 911’s – Bruce has explained to me on a number of occasions that  brand-new panels generally need many man hours to cut, reshape and weld them before they  properly fit the car for which they are intended. This even applies to Porsche supplied panels e.g. 911 wings.

In among the various 356’s being reassembled there were also a number of 911’s including  Steve Winter’s Jaz Porsche ’65 race car.

After a hectic racing season – it was receiving attention to it’s various race inflicted war wounds in readiness for next season.

Repairs to my car were necessitated by an elderly gentleman who managed to ram his car into the back of my beloved 911 as I stopped to let someone walk over a pedestrian crossing in Crouch End.

To say I was a bit upset would be a gross understatement but upset quickly turned to frustration and then to blood-boiling anger when the driver of the misguided (Vauxhall Astra) missile refused to give me his name and insurance details.

With unerring and brazen logic – he explained that his refusal to provide these details was because he was 69 and couldn’t afford to lose his no-claims bonus! As you can probably imagine – this was situation with which I had little sympathy. Consequently  – I proceeded to photograph him, his car and the damage to my car using my iPhone.

Anyway – many months passed during which I :-

I was very fortunate that damage was restricted to my driver’s side quarter bumper which superficially only seemed to have acquired a severe crease and a smashed reflector. Unfortunately however the quarter bumper had been pushed under the car by the force of the impact also damaging an oil tank support bracket etc. etc. 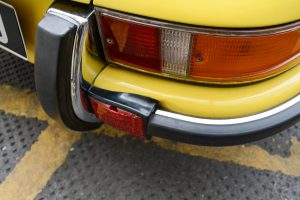 With a waiting list for world class restoration work stretching out beyond twelve months – I was delighted that Bruce was able fit-in my accident repair as this was not a job I could or would trust with any old body shop.

Collecting the repaired car from Sportwagen was as ever – a delight. A good opportunity for a Saturday morning chat with Bruce and Bob about cars and characters over a coffee –  with a swift gawp at ongoing projects thrown-in for good measure. The drive back to London in the Yellow Peril on a crisp, cold morning was great!