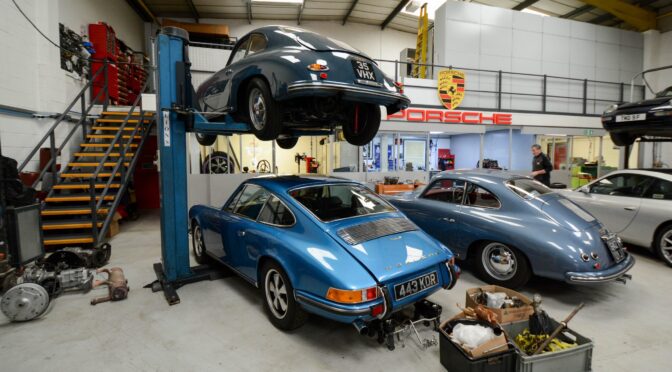 Let’s face it, asking how my ’71 911 was going at the November Porsche Club Out East meet was never going to elicit the response “Perfect Steve. Not a single thing wrong it but I think old cars can become interminably boring over time due to their relentless reliability” ……… was it?

To be fair – I did actually restrict my response to “Pretty good thanks apart from the need for a bit of minor clutch adjustment”.

Steve Winter being the true gentleman he is immediately told me to bring Yellow Peril up to his Jaz Porsche workshop in St Albans the following Saturday where he’d quickly carry out the necessary clutch adjustment.

Now I just need to explain that visiting Jaz at anytime is always a pleasure but Saturday morning visits traditionally commence with a proper fried breakfast in a delightful St Albans cafe in the company or some extremely nice and exceptionally knowledgeable Porsche owners, racers, mechanics and restorers. This particular Saturday was no exception.

When we were eventually able to tear ourselves away from our respective towering infernos of protein, even more Porschephiles had gathered outside Jaz HQ huddled together to keep warm until the premises were opened up to reveal a lovely mix of cars and exotic Porsche paraphanalea.

Just inside the roller shutter doors was the visually arresting site of this newly painted 2.2 911T in the wonderfully in-your-face colour of Signal Orange. What a fantastic colour to brighten up a grey and drizzly day! Just imagine what it’ll look like in bright sunshine?

I then realised that I’d met the owners of this larily lovely car some time back at an Ace Cafe Porsche Club meeting to which they had brought their 914 (or is that one of their 914’s?) and they reminded me that we are relatively close neighbours in North East sector of “the Smoke” so it’ll be really good to bump into them again once their totally Tango’d “T” is fully assembled and on the road.

From looking at the beautiful body shell and having being given some insight into its intended technical spec, it should turn out to be a rather nice “T” to tootle around in, especially thanks to it’s Jaz-fettled-&-breathed-on and completely be-Weber’d engine with “E” cams.

The rest of the Jaz work workshop was choc-full of the most beautiful cars in various states of completeness with some stunning 356’s including a Carrera, a white 2.2 911S, Steve’s blue 2.2 911S and a smattering of more modern German metal.

This early Carrera with its single engine grille and beehive tail lights was truly sublime.

The 2.2L cars are quire rare so to come across four cars at one time is quite unusual.

I have to make some mention of the unbelievably original 2.4 911S pictured below. Owner and renowned Porsche aficionado Fred Hampton kindly explained that the car is completely original with its original body panels, floor pans etc and the car has miraculously covered only 50k miles during its lifetime , during which it spend many years in the balmy climate of Palermo on Sicily.

This time warp survivor is quite literally as it came out of the factory and as such, it is an invaluable reference point for all Porsche restorers. It was such a privilege to see it and have its unique original features pointed out to me by Fred.

Steve made a specific point of showing me the engine pictured below. I recognised that it was a lovely example of the Ernst Fuhrman four cam Carrera engine but Steve had to point out the linkages between the fan and the twin distributors marked out this particular engine as being destined for instalment in a super rare and incredibly beautiful 550 Spyder race car.

The 550 Spyder punched well above its weight in racing circles when new thanks to its light weight, slippery alloy body work and reliable engine. It is more notoriously remembered as the Porsche model in which James Dean lost his life but this tragic event was due to a simple road accident and not a racing incident.

Steve changed the clutch in the Yellow Peril just before my 2018 Le Mans Classic trip. The old clutch had lasted a good 20 years so no complaints on that front and no major concerns over the recent clunkiness to gear changes. Expert underside adjustment was all that was required.

Steve drove the car from Jaz garage to our brekkie rendezvous and he confirmed exactly what adjustment was required to set matters straight and after we returned to the garage, it wasn’t long before Steve had jacked the car up on one side and inserted himself underneath it to sort it out.

On the garage to cafe drive, Steve also noticed a touch of lumpiness in the engine at tickover, so once the car was back on the deck, he pulled the engine lid release and by ear alone adjusted the mixture to each cylinder to change it’s sound from asthmatic chugging to an almost imperceptible purr.

Last but not least, Steve investigated the non-pumping screen washer pump. Multimeter measurements caused some initial confusion until Steve remembered that my car has the one year only intermittent wiper mechanism with a similarly unique wiring arrangement to the pump.

Wiring arrangements turned out to be irrelevant when Steve dismantled the pump only to confirm it to be completely cream-cracked. Replacement bargain priced Porsche £90 pump now on order!

Oh joy – I’ll have to go back to Jaz to collect it! Looking forward to it.