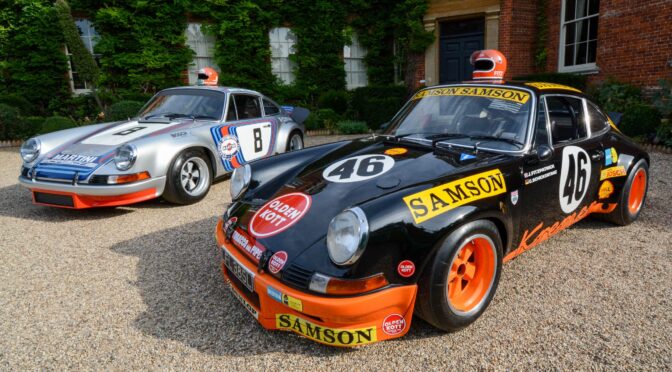 Hats off to the organisers of this long delayed and much missed event which was finally pulled-off to deliver acutely needed therapy to the pandemic fatigued Porschephile masses.

Hedingham Castle (built during the 11th and 12th centuries) provides an an archetypical British (oh alright Norman, if you’re going to be historically pedantic) backdrop to a fantastic gathering of early Porsches.

I’ve attended busier versions of the event with associated auctions, on-loan Porsche museum treasures, major contingents of European cars and featured models paraded up the driveway to the castle keep but this was a much more simple and relaxed affair – and all the better for it.

Pandemic frazzled Porsche folk were able to amble around during the sublimely beautiful late summer weather to chat with friends, acquaintances and complete strangers about their precious cars, their hopes for future events just gently soaking up the peaceful, friendly atmosphere.

Some car events (often through necessity of scale) can feel incredibly regimented and over-organised, leaving you with a sense of and relief but also a degree of exhaustion having finally gaining entry, navigated the plethora of on-site directions, rules and regulations throughout the day and then finally having to leave at a designated time to wend your weary way home.

Not so at Hedingham. We wafted into the event, parked-up really quickly without any fuss or bother and were then left completely free and unhindered to examine and admire the cars at our leisure and head-off at a time of our choosing. A truly relaxing and energising experience.

Not much more to say than that really. A lovely event which brightened up yet another strange (hopefully post-pandemic) summer. Can’t wait for the next iteration when our non-UK bretheren can hopefully join us provided our daft bloody government doesn’t dream up ways of preventing it! What a strange world we inhabit.

It ‘s always nice to see some “special cars” segregated from the rest and the small group of RSRs were very special.

911 RSRs are the exciting outcome of early narrow bodied cars being simultaneously put on a diet to reduce weight and also put on a serious course of steroids to beef them up (most especially in the horsepower department).

Wheel arches pumped-up to make space for fatter wheels and rubber to more comprehensively stick to the tarmac on the bendy bits. Aerodynamic appendages extended and enlarged to prevent unintended flights of fancy. Engines expanded and tuned to deliver herds of additional horses. Pretty well all other components strengthened and lightened in equal measure to maximise power to weight ratio and tractability.

Sometimes lairy colour schemes and sponsorship decals are used sensitively to accentuate but soften brutal bodywork bulges and to visually lower vehicle stance to make the cars look like they are travelling at speed even when stationary.

The 901 is a somewhat mythical beast having been Porsche’s intended model number to replace the incredibly long-lived 356. Unfortunately Peugot had different ideas claiming that any three digit model numbers with a zero on the middle were previously trade marked by Peugot. Ludicrous really, but it gave us the now iconic 911 model number instead of 901 as originally intended.

The purity of the original 901 design really shines through this immaculately restored 1964 example.

To my mind the ST body style and associated mechanical set-up was the pinnacle of early 911 design……….until the RSR’s came along at least. To come across an original ST, indeed the first 2.5L ST was an absolute delight.

The flared arches and lack of aerodynamic appendages give the ST a purposeful old-school stance which I think is just perfect.

This ’71 car is from the same year as my 2.2 911E and it embodies the lightweight components and increased bhp ethos of Porsche’s outlook at that time before they entered the big league with increased capacity road cars and then the mighty 917.

I’ve been following the the build of this 1968 SWB lightweight 911 by Richard King of Karmann Konnection for some time, so finally seeing it in the (vestigial) flesh was very interesting.

As a lightweight (sub 650kg) design concept, one can’t fault it but as a car I’d be comfortable driving amongst modern day traffic – well perhaps not. The factory went to great lengths to create amazingly lightweight racing versions of their cars but I don’t think they would ever have gone this far. Just a little bit too much like a super-low-fat Swiss cheese for my liking!

The 911R was the Porsche factory attempt at creating a super light race car. An initial car was created in 1967 by Ferdinand Piech and Rolf Wutheich by stripping and lightening a 911S.

Only 21 cars were built but many of them achieved great success in a variety of races. Perhaps one of the more famous cars was the 911 R entered by Gerard Larrousse in the 1969 Tour de France. Larrouse offered Porsche engineers a case of Champagne for every additional kilo of weight they could shave off his car a head of the race. He won the race but had to deliver seven cased of champagne to the engineers.

Porsche 356’s are beautiful gem-like devices and seeing so many of them (almost 90) turn up at Hedingham was in equal measure deeply pleasurable and highly frustrating. I want one!

Most periods of 356 development were represented from the earliest split-screen cars to the last of the line SC’s and even a Carrera 2, including quite a number of cars which were for sale.

Pre-A 356’s were built between 1948 and 1955 when the 356 A was officially launched. The first fifty or so cars were constructed in Gmund in Austria before production shifted to Stuttgart.

In their earliest form – the Pre-A 356’s featured split windscreens but as automotive glass technology became more advanced, Porsche introduced a one piece “bent” screen with a distinctive vertical crease down the middle before eventually introducing a more flowing (“non-bent”) one piece windscreen with the 356 A.

I first saw this particular split screen 356 Cabriolet some years back when the monthly meeting of Porsche Club GB London Region used to be held in Smithfield Meat Market on Saturday afternoons. At that time, the proud owners were only to happy to provide background information on their rare and exquisitely beautiful car.

The bodywork of this very early Porsche 356 Cabriolet has a simple, uncluttered elegance about it.

Simon’s race prepared Bent-screen 356 looks absolutely stunning and with its motor freshly rebuilt by Steve Winter at Jaz it must go like stink.

The 356 Carrera 2 (internal factory designation Carrera 2 GS) was the last hurrah for the Fuhrman four-cam engine in a 356 chassis prior to the introduction of the 911.

Introduced in September 1961, the Carrera 2 was initially based upon the 356 B body/chassis in T6 form. The T6 is outwardly distinguishable from earlier T5 models by the more square front edge to the bonnet, an external wing mounted fuel filler (in LHD cars), larger rear window and twin grilles in the engine lid plus other less obvious changes.

The standard passenger seat and more heavily bolstered driver’s seat in this car suggests that this Carrera 2 is intended for spirited use.

It’s now hard to comprehend that the Speedster was once the cheapest Porsche model to buy when new. Built as a basic, simplified car to meet the needs of US (mainly Californian) weekend racers, the cars are now highly sought after and consequently one of the most expensive 356 models.

Not the most practical of Porsche’s for the UK’s soggy maritime climate but undeniably beautiful.

There’s a school of thought that the short lived and low production 904 is one of the most beautiful Porsche’s ever made. I’m a fully enrolled pupil of that school!

The 904 suffered the same fate as the 901 in becoming embroiled in Peugot’s daft idea that they had trade marked the zero in the middle of three digit model numbers so it’s name was changed to Porsche Carrera GTS.

This highly innovative car which came off the drawing board of Alexander “Butzi” Porsche in 1963, marked the all important transition between 356 based racing cars to a series of increasingly successful models culminating in the 917 which finally delivered Porsche’s first outright win at Le Mans in 1970. This in turn laid the foundation for Porsche’s long lasting dominance in the highly competitive field of sportscar racing.

Unlike Ferrari, Porsche had no problems building mid-engine’d racing cars. The first Porsche badged car (356-001) was mid engine’d as were subsequent 356 based race cars including the 550 Spyder and 718 race cars. But, there were also the pre-war Porsche designed Auto Unions which featured incredibly powerful V16 and V12 mid-mounted engines.

The 904 did however diverge quite significantly from earlier Porsche designs. It was for example, the first car to feature a ladder chassis with a hand-laid fibre glass body bonded to the chassis to create a lightweight but very rigid structure.

The 904 was also the first Porsche to abandon the use of trailing arm and swing axle suspension, instead utilising coil springs and unequal length A-arms.

Although the car was originally designed to accept Porsche’s new flat-six engine, most cars built during 1964 used the 2.0L Fuhrmann flat-four engine. Flat-six and and even flat-eight engines of 2.0L capacity were however used in cars constructed during 1965.

The low weight (665kg) and low drag coefficient of the car (0.34) imbued the car with a great power to weight ration which enabled it to out-perform much more powerful opposition and it’s innate reliability resulted in 904s achieving great success during the ’64 and ’65 race seasons at circuits all across Europe, the USA and Canada.

As the owner of a 1971 911E, I am of course biased towards cars from a similar era and there were plenty on display at Hedingham including an original 1964 901 which predated the model name change to 911.