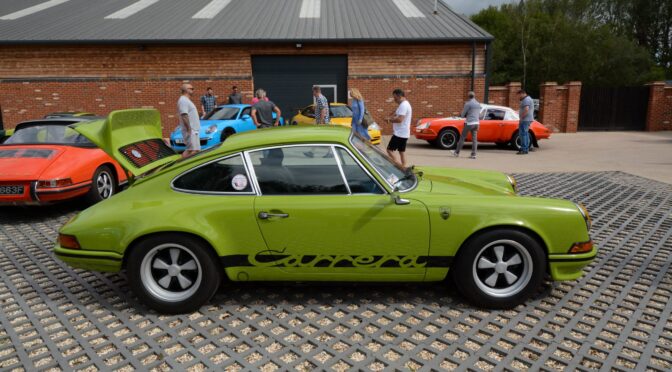 So what and where on Earth is Boxengasse?

Well Boxengasse – the word translates from German to English as “Pit Lane” but Boxengasse the place is a large rural site off the A41 near Bicester which is dedicated to all things Porsche.

It incorporates a number of old farm buildings as well as new purpose built buildings in the same agricultural/industrial style which accommodate the site owner Frank Cassidy’s home, his personal car collection and the premises of Autofarm – a long established classic Porsche restoration and race preparation company.

The particular event I was attending was Oilcooled ’20 which was described as “A celebration of Porsche’s air-cooled evolution. Bringing together the like minded, easy-going and devil may care camaraderie of air-cooled Porsche culture and heritage“.

I have to say the description of the event was pretty accurate as I was able to tear myself away from the worries and woes of pandemic lockdown in London to join what seemed like hundreds of other Porschephiles blasting their air-cooled projectiles from all points of the compass to descend upon Boxengasse for some much needed Pandemic Porsche therapy.

For me personally – it was also a chance to meet up with my good friend Kirk and see his 911ST Replica after its final fettling had been completed by Autofarm.

Despite the temptation to peruse the plethora of field-parked Porsche’s, I made a bee-line for Autofarm’s workshop to find Kirk and his ST.

I was absolutely stunned to see the end result of Kirk’s tortuously long restoration, modification and upgrade to produce what is a sublimely beautiful but purposeful road-going ST replica. Its stunning yellow bodywork really showed-off the curvaceous extended wheel arches filled with wide wheels shod in super sticky rubber.

The oil filler flap behind the driver’s door confirms that the base car was a 1972 model which was actually a right hand drive South African race car which came complete with a twin-plug 2.7 Litre flat-six engine.

I know that the beautifully neat and tidy engine had presented Kirk with a few challenges along the way to sort out a workable distributor set-up, modify the 2.4 Litre MFI fuel pump with the right space-cam, fit high butterfly throttle bodies ………….. and so on, but the end result looks great.

Initial and subsequent dyno-testing of the engine also threw up some problems but once these were finally sorted, it delivered a a very healthy 270bhp which in this lightweight car should be more than enough oomph. Sadly – I didn’t stay long enough to hear this beast fire-up. That’s an aural pleasure I’ll need to wait a little longer to experience.

Factory built 911 ST’s are extremely rare although there is some debate about how many were built but it was probably between 20 and 30 cars constructed between 1970 and 1972.

They were based upon S-spec cars of the period using engines of 2.2 Litre and 2.4 Litre capacity. The rally cars tended to stick with stock capacity but race track ST versions had their engine capacity expanded to 2.3 Litres (up from 2.2) and 2.5 Litres (up from 2.4) respectively.

Other modifications were primarily to lighten the cars as much as possible by using thinner gauge steel and consequently lighter weight body panels, thinner glass for the front windscreen and thin plexiglass for side and rear windows, deletion of the rear seats, removal of sound deadening, carpets, window winder mechanisms, radio, glovebox lid etc.

Lightweight racing seats, roll bars, safety harnesses and other safety equipment were also fitted and when taken to the extreme, the net result of this lightening exercise were cars weighing just over 900kg which ensured an amazing power to weight ratio.

The external oil filler flap confirms the origins of the ’72 base car and the Fuchs wheels fitted front and rear comply with later ST models as earlier cars use wide Minilite wheels to the rear.

It was only after the event that I realised that I’d failed to photograph that many of the 356’s that turned up on the day. Anyway – there were quite a few and they ranged from the sublime terracotta coloured 356A driven there by London Region Porsche Club friends to the (to my mind) ridiculous squished Outlaw model that looked like it had been dropped into the field from a great height.

If you think the that genuine factory built ST’s are rare then the 911R takes you new levels of rarity as only 20 were built from 1967. With rarity however comes the desire to replicate so there are now many R replicas and full or partial evocations. I assume this is a faithful recreation an R.

The original R was the brainchild of Ferdinand Piech who’s vision was to combine brutal weight saving in the short wheel base 911 with the powerful and proven 210bhp flat-six engine normally used in the 906 and 910 race cars.

Weight saving measures included replacing steel panels such as wings, bonnet and bumpers with fibreglass, replacing glass windows with plexiglass, stripping-out the interior and even fitting plastic door handles. The super-slimmed-down car weighed-in at just 800kg – the lightest 911 ever made and around half the weight of a modern 911.

In the hands of great drivers of the day including Vic Elford, Hans Hermann, Jochen Neerpasch, Jo Siffert and Gerard Larrousse, the 911R was successful in road and track racing, rallies and in setting high speed world distance records.

The car also paved the way for other lightweight high performance Porsche’s to follow such as the legendary 911 Carrera 2.7RS.

The 911R is a very special early car deserving its own section but there were many other early SWB and LWB 911’s present at the event.

Fuchs forged alloy wheels are so synonymous with early 911’s that it is quite unusual to se cars on original steel rims.

Very early 911’s have the purity of line of Alexander (Butzi) Porsche’s original design. The sloping 911 script on the engine lid looks so right that it’s a shame it was changed.

Early SWB cars are enthusiastically raced across number of race categories. Single model races can be particularly spectacular as very evenly matched machinery is flung around race tracks enabling the best prepared and most expertly driven cars to stand out from the crowd.

The 4-cylinder 912 was created primarily for the American market which missed the 356 model.

The 2.2S is an extremely fun car to drive thanks to its raucous and willing engine pushing out 180bhp.

My Yellow Peril is a ’71 E model fitted with a period correct 2.2S engine. The old girl celebrates her 50th birthday in October 2020!

From ’72, the 911 adopted the long stroke 2.4 Litre engine which could be readily expanded to 2.7 Litres for racing purposes giving rise to the 2.7 Litre RS.

For a long time the rarity and burgeoning value of 911 2.7 RS models resulted in a positive craze to update or backdate 911’s to look like and ideally perform like these legendary cars.

It became de-rigeur to bolt on ducktail spoiler engine lids, moulded fibreglass RS front and rear bumpers and then stick loud Carrera decals along the sides of donor cars.

Over recent years however, the tastes of the 911 cognoscenti have gravitated more towards the earlier and more subtle bodywork delights of the ST model. The rather expensive Singer 911 is perhaps a good indicator of this trend.

Whilst admiring Kirk’s ST Replica inside the Autofarm workshop, the owner of this Condo Green ST Replica got chatting and offered to show us the car which he’d relatively recently purchased.

I have to say – the car really looked the part with its period stickers and racing roundels and was obviously providing a fun ride for the happy owner.

It was initially used as a model name for the Fuhrmann four-cam engined 356 but it is perhaps best known for its use in conjunction with the 911 2.7RS which remains one of the most desirable classic 911 models.

This Brumos RSR tucked unobtrusively at the edge of the forecourt in front of Autofarm and the Boxengasse car collection was a thing of understated purpose and beauty.

Peter Gregg’s Brumos company (based in Jacksonville, Florida) took delivery of the 2.8 Litre RSR in early 1973 and it was later sold to Mexican Hector Rebaque who raced it very successfully for many years before it returned to the USA and then made its way to Europe.

This lightweight of the car with over 300bhp on tap was phenomenally successful over a long and hard racing life and it is amazing that it has survived in such fine fettle.

The self styled Urban Outlaw has built quite a number of modified Porsche cars but of them have been sold and fewer still have made it across the pond from LA to the UK. This is one exception.

The 911 TR includes a number of Walker’s trademark features which go beyond period period modifications to make cars lighter and more race ready.

This ’72 model based car has the ST-like flared arches, plexi-glass side windows (with and without air-vents), fibreglass front and rear bumpers etc. that the factory would have used for race cars of that period but it also has additional cooling louvres in the engine lid and drilled door handles.

Rear lights are similar to those fitted to the 911R but are built into the body rather than in a light pod.

Brothers Erwin and Manfred Kremer created and onward developed some incredibly successful racing Porsche’s. Often working closely with the factory they achieved an outright win at Le Mans with their 935 K3.

The value of original Kremer Porsches is astronomical so I assume this Kremer 911 RSR resplendent in its 1975 Vaillant race livery is a replica as an original car would be more likely to be in a museum rather than parked in a field.

Replica or not, it is an extremely striking and original looking car which presumably has performance to match.