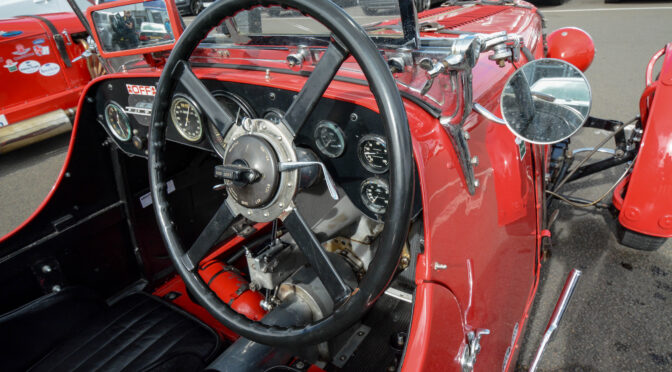 I normally try to attend this meeting as it’s one of the later events in the season and always has interesting cars in the paddock and out on track but this year it also included the rather interesting Equipe 3 Hour Classic Relay race so even more reason to go!

This meeting is named after prolific racing driver and war hero St John (pronounced Sinjun) “Jock” Horsfall who famously campaigned  an Aston Martin 2 Litre Speed model in the 1930’s before serving in the British Secret Service during WWII. The  misinformation campaign In which Horsfall was involved successfully convinced the German forces that the allies would invade Greece rather than Italy thereby diluting German troop concentrations in Italy. A story retold in the film “The Man Who Never Was”.

In 1945 after the cessation of hostilities – Horsfall resumed racing a couple of Aston Martin Speed models (one running on methanol), achieving an outright win in the 1946 Belgian Sports Car Grand Prix. He then went on to win the 1948 Spa 24 Hour Race with co-driver Leslie Johnson.

Perhaps his greatest achievement however was in the 1949 running of the Spa 24 Hour Race. Despite having no less than Paul Frere (racing driver and later automotive journalist, consultant and author) as his co-driver, Horsfall opted to drive his Aston Speed car himself for the entire 24 hours, finishing 2nd in class and 4th overall. Just imagine how pissed-off Frere must have been …………. kicking his heels for 24 hour hours waiting for a drive that never came!!!

This AMOC meeting featured a memorial race for St John Horsfall who sadly died after rolling an ERA in the BRDC International Trophy Race at Silverstone in 1949.

A Day At The Races

I parked my old 911 up next to the National Paddock and wandered into Race Control to buy a programme of the day’s events.

This year – the event also featured what turned out to be an immensely enjoyable race in the form of the Equipe 3 Hour Classic Relay involving no less than 25 teams  campaigning specific models, marques,  contemporary cars from a particular period or just a bunch of mates in whatever classic cars they happen to have! Great fun.

Being the last Aston Martin Owner’s Club event of the season – it is always well attended by club members with all manner and age of Aston from pre-war classics to the most modern of Aston products.

The pre-war cars are a particular favourite as they epitomise the spirit of pre-war racing.

My interest in post-war Astons ends during the early David Brown period which encompassed the DB1, 2, 3, 4, 5 and 6 and racing specials. Having initially been a fan of the 6, my inclinations drifted back  in time towards the 5 (obviously influenced by the DB5 Bond car) but I’m now a confirmed devotee of the DB4 purely from an aesthetic perspective as I can’t really see me buying one any time soon!

I just love watching DB4’s on track as they seem to have a wonderful predictability in handling – helped as they are by their wonderful 4.5 Litre Tadek Marek designed straight-six engines. My absolutely favourite Aston is the DB4 GT Zagato.

The William Towns DBS and V8 period left me cold – as did the even more wedgy Lagonda. I’m pleased to see Aston in it’s current form doing well. Their V8 and V12 GT cars make a lovely noise but they are just not my cup of tea.

Races for ’50s sports cars are never short of Jags and this proved to be the case for the AMOC ’50s Sports Car Race which included a number of XKs.

The 150S was handsome in Gunmetal Grey and the XK120 Sports in silver and red colour schemes also looked great but the car which stood out for me was a blue XK120 Fixed Head Coupe.

Whilst the XK120 open top sports might be the preferred boulevard cruiser for many, I just love the lines of the coupe with its swooping wings, slightly bulbous cabin and delicate quarter bumpers front and rear.

Emerging from WWII – the XK120 was quite revolutionary as it moved away from the running boards and separate headlights of the pre-war SS Jag. Strangely however – in side profile it almost alludes back to the coach built Art-Deco creations of the 1930s as exemplified by the Talbot Lago Teardrop Coupe and the Bugatti Type 57 Atlantique.

I chatted with the owner of the blue XK120 Coupe who explained that he bought the car in 1985 for £1,500 and then promptly sold a set of triple Weber carbs and manifold that were in the boot and a spare steering rack for roughly what he paid for the car.

He went on to explain that ten years of improvement and development enabled him to start racing the car in 1998 – by then fitted with an E-Type gearbox and 3.8 Litre engine with triple 2 inch SU carburettors (rather than the original 3.4 Litre engine with twin 1 and a half inch SU set-up).

He is still racing the car to this day and his exploits over the years have introduced him to other like-minded racers who have generously shared their cars with him, thereby enabling him to race such exotica as a Grand Prix Maserati and a Bugatti Type 59. I’m envious of the charmed life he has lived in the company of his XK120. Long may he continue racing it.

The D-Type in the BRDC parking area? Just sublime.

This lovely Elite was designed for racing and that’s what it does best. Its super-light construction thanks to a fibreglass monocoque (i.e. no chassis), incredibly low drag coefficient and rev happy Coventry Climax engine ensured fantastic success on race tracks around the world.

Elites won their class no less than six times at Le Mans and they were also successful at many other classic tracks including the Nurburgring.

Unfortunately Lotus lost money on every car made and manufacturing ended after around 1030 Elites were built.

Colin Chapman then went on to develop the Elan but switched to using an X-shaped steel chassis and Ford based engine with Lotus twin-cam heads. Using a conventional chassis speeded up production helping Lotus to sell more Elans more quickly.

Unlike the Elite – the Elan was designed primarily as a road car so it’s wider mass-market appeal helped Lotus move rapidly back into profit enabling them to fund their subsequent F1 racing endeavours.

As well as the SWB 911s taking part in the Equipe Classic Relay race – other interesting Porsches were to be found around the paddock and on track in the AMOC Intermarque Championship.

I made reference to the Tornado marque in my BP is for British Plastic – A to Z of Car Stuff post some time back but I was unable at the time to illustrate it with a photo of a Tornado model.

Thankfully a kind soul brought a Tornado Talisman along to race at this event. A brief chat with the owner revealed it had been purchased just before Christmas 2016 as a potential race car for his wife to drive and to provide some contrast to their Mallock race car.

It had apparently been race prepared by the last but one owner so it was relatively straightforward to complete its re-commission for track use. The car looked great with some bodywork design similarities to the Reliant Sabre Six but with much more delicate lines. It’s forward hinging bonnet a la TVR and Triumph Vitesse provided fabulous access to the engine bay which housed a Cosworth tuned ford 4-cylinder engine.

This rather interesting race was open to pre ’66 GT and GTS cars of up to 3.0 Lite capacity and also to Touring Cars of up to 2.0 Litre capacity running to Appendix K regulations – all cars running on Dunlop Historic tyres.

The rules were fairly simple with teams comprised of 2, 3 or 4 cars with up to 4 drivers. Each car had to complete a minimum of 30 minutes on track or a maximum of 2.5 hours with only one car per team on track at a time.

In essence the first car started the race and then the next car could only leave the pit garage and go out on track after the preceding car had passed by the garage on its exit from the pit lane.

There were some entertaining team names such as The Crewds Missiles, Tall Bald and Short, Ecurie Curmudgeon and Sprites for Sore Eyes but I was following the fortunes of the Team GB which should have included three SWB 911s in red, white and blue.

A really fun race with a somewhat confusing handicap system which left everyone guessing in the regular results updates.

Well done to Team GB for doing so well despite closing points afflicting the blue car (driven by Matt Holme)and a minor rear-end shunt and worrying petrol smell impacting the red car (driven by Steve Winter and Simon Bowrey) during the course of the race.

The following cars also caught my eye at the event:-