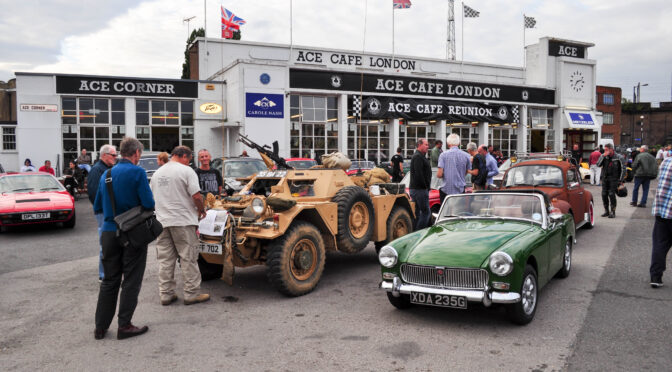 When my friend and fellow petrol-head Arun suggested a trip up to the Ace Cafe in his wonderful Caterham 7 for the the Classic Car Night + Lotus + Midget & Sprite meeting I had no hesitation in accepting.

After the minor complication of getting my non-sylph-like frame into the tiny Caterham 7 cockpit and strapping myself into the full harness the journey up to the Ace Cafe was great (despite the early evening homeward-bound traffic). The 7 really is like a 2-seater jet-propelled skateboard – soooooo fast and responsive.

Arriving at the Ace revealed an already healthy turn-out of a wide variety of classics which was encouraging and after being guided into our parking space – the cars kept just kept-on arriving.

The Ferrari 308GT4 Dino along with it’s more sporty 246 Dino sister are strictly speaking Dino’s rather than than Ferrari’s. Although Dino’s were manufactured by Ferrari – the Dino name was reserved for cheaper models which utilised engines with less than 12 cylinders. This was meant to avoid any possible confusion with Ferrari’s flagship full-fat V12 and flat-12 models of the period.

Over time the distinction between Dino’s and proper Ferrari’s  has become blurred as the desirability of certain Dino models (most especially the 246 Dino) has sky rocketed. Dino’s are now firmly back in the Ferrari family fold and owners would be mortified at the thought of them NOT being regarded as true Ferrari’s! Good sport can had by winding Dino owners up on this point however!

There was a time that I quite liked the the 308GT4 and I toyed with the idea of buying one but this was based in-part upon the fact that they were very cheap at that time. Nowadays, unlike its 246 Dino sister – I feel the 308GT4 has dated quite badly.

As Arun pointed out – they are nice to look at from from certain angles (especially the rear) but there’s a fundamental awkwardness about the front and side aspects leaving them looking rather stubby and wedge-like. This awkwardness is accentuated by the forward biased driving position in relation to the rest of the car.

I’m nit-picking! Good to see such cars still being used rather than being tucked away in hermitically sealed garages……….even if they’re not true Ferrari’s!

I’ve always like Ginetta’s and most especially the Ginetta G4 which looks like a shrunken E-type. I’d love to have a drive of one of these little beauties.

The Loti (collective name for Lotuses?)

Having arrived in Arun’s Caterham 7 – we made a bee-line for the other gathered Lotuses/Loti.

Arun recognised the blue and red one as it had been worked on by people he knows in Lotus/Caterham circles. It was bright and shiny thanks to its wrapping finish to bodywork. Let’s face it – there’s not much bodywork to wrap. One roll of coloured cling film would be more than adequate!

It was even running on Lotus wobbly-web wheels which I thought were reserved for full-on race models. Stone Foundries of Charlton used to makes these Elektron cast magnesium-aluminium wheel for Lotus to help them follow Colin Chapman’s mantra – “Simplify – then add lightness”!

The car was a little too modified for my taste but each to his own.

Of the remaining cars – the white car looked the most interesting as it was quite early and really looked the part on its painted wire wheels. The little aero screens will do little to prevent the build up of flies, birds and other airborne debris in you teeth though!

The appearance of both a Willy’s Jeep and some sort of Bren Gun Carrier was quite entertaining – especially when it came to trying to reverse park the fully tooled-up gun carrier amongst already parked classics.

NB: My mate Gordon informs me that the gun carrier is actually a Daimler Ferret Scout Car. “Ferret” – what a great name for a vehicle – especially a Daimler. Looking forward to Jaguar Stoat and the Rolls Royce Badger!

With zero rear visibility the driver had to rely upon the organisers to very carefully him into parking position. During this exercise – there were quite a few worried looking classic car owners.

Hard to tell how tensions might have been resolved if there had there been any collisions! Call-in the UN to create a North Circular buffer zone?

It turns out that Arun and I both have a soft spot for Sprites and Midgets (of the car variety) – most especially for Numero Uno – the MkI Sprite  which is more affectionally referred to as the Frogeye.

A nice little group of Frogs were on display but the star of the pack was one in the classic colour scheme of Old English White and red leather (or was it leatherette in those austere immediate post-war years?).

Arun and I consulted on best car of the night and I’m pleased to say it was a unanimous decision with the MGA just pipping the best of the Frogeye’s to the post.

My family trip to Mexico in May 2016 exposed me to a plethora of Beetles in various states of repair (or perhaps more accurately  disrepair) but I have to say this rust finished Beetle looked great.

I can’t help feeling that it deserves to be stored in a garage constructed from Corten steel!

“The Rest” at this meeting was a refreshingly varied bunch of cars not all of which would not fit under my personal definition of classics   but that’s not what this meeting is about and I’m open to debate about the important topic of what constitutes a classic.

Hat’s off to all of the owners/drivers who brought their wheels out to entertain the Ace Cafe punters. It was a great way to spend a weekday evening.