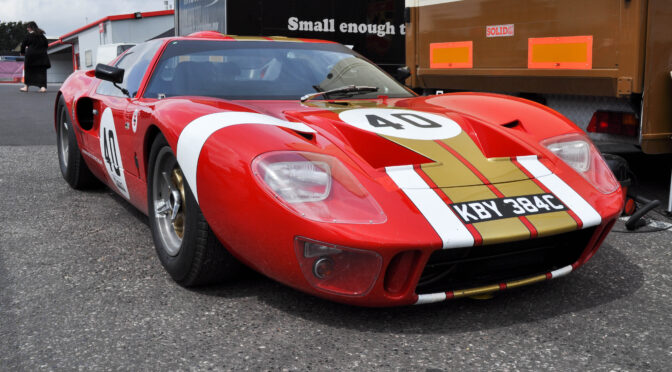 “So there we were down the Old Bull & Bluster savouring the delights of their on-tap beery lubricants when the conversation turned to ……………………….. REVENGE!”

Rog: Come on Phil, you’ve made the case for how Messrs Bizzarrini and Lamborghini exacted their REVENGE on Enzo Ferrari. But how does Henry Ford II fit into this torrid triumvirate?

Phil: It’s clear that old Enzo made lots of enemies in high places ………. and quite frankly, in the the automotive industry in the ’60’s, you couldn’t get much higher than Henry Ford II.

Rog: I can see that a pattern is definitely starting to emerge which suggests that Enzo single-handedly spawned shed-loads of innovative if somewhat vengeful competition against his beloved Ferrari company.

Phil: The evidence for Enzo’s self inflicted damage is quite compelling. The difference with Henry Ford’s flavour of revenge was however to hit Enzo where it really hurt the most – on the race track!

Rog: OK – Phil, I’ll concede that Lamborghini competed with Ferrari in terms of road cars but didn’t Bizzarrini also have a bit of a race track dig at Enzo with the Breadvan?

Phil: Correct Rog but modifying a Ferrari 250 GT SWB for Count Volpi to become a GTO beater was a one-off exercise which Enzo probably regarded as a mildly annoying snub from both Volpi and Bizzarrini. Henry Ford’s REVENGE was of a different scale altogether. Having said that – the Breadvan was a very cleverly executed snub as Bizzarrini simply applied the same principals he had used on the GTO of lightening the car, lowering the centre of gravity and moving the engine back to a more central position. He then got Piero Drogo to create the unique Breadvan body shape and the hastily built car beat Ferrari’s GTO at its own game.

Rog: That must have hurt! The story goes that Enzo refused to provide Count Volpi with a Ferrari GTO to race so Volpi commissioned the creator of the GTO and former Ferrari employee (Giotto) to build one from a supplied 250 GT SWB. Another example of double revenge which is always better than single! But I digress – let’s get back to where Henry Ford fits into this tale of REVENGE.

Phil: Yep – we’re rambling again! Let’s get back to how REVENGE took on transatlantic dimensions. To do this – we need to delve into the state of Ferrari’s finances during the ’60s. The simple fact was – their finances were in a dire state, in fact so dire that they had to actively seek serious and urgent financial assistance right up to the extent of considering takeover. At that time, the Ford company was seeking to establish sports car and racing credentials so the acquisition of Ferrari was the simplest and quickest way of achieving this.

Phil: Noooooooo – much worse than that – Enzo wouldn’t sell his company to Henry! Ford was looking to buy Ferrari lock-stock and all V-twelve smoking barrels!

Rog: Well, to be fair, given Enzo’s obvious pride in his company and no-doubt with a dash of Tuscan hubris ……you can see why Enzo didn’t budge. And lets face it “Fordrrari” doesn’t have quite the same ring to it – does it Phil?

Phil: “Ferrord” doesnt work either but in actual fact – the deal came very close to completion after Ford had spent shed-loads of USD going through commercial due diligence, discussions with Ferrari’s lawyers, accountants etc. etc. Then at the last minute – Enzo terminated negotiations in rather spectacular walk-out fashion when Ford pointed out that upon completion of the sale – Enzo would also need to relinquish control over racing operations. Henry Ford was incandescent with rage at Enzo reneging at such a late stage on what he (Ford) thought was a done deal. He vowed there and then to beat Ferrari in their own back yard.

Rog: So this was the catalyst of Henry Ford’s REVENGE…….big time!!! And the instrument of Henry’s revenge was ………….. the fabulous and iconic Ford GT40!

Phil: You’ve got it Rog. I’m impressed – you are paying attention after all!

Phil: Yep – Le Mans ’66 was totally dominated by Ford with their GT40’s hogging the podium by finishing 1st, 2nd and 3rd.

Rog: It’s amazing what you can do with a mildly modified Lola Mk 6 with a massive 7 Litre Ford V8 stuck up its bottom! And all nicely fuelled by Mr Ford’s big bucks and a gutful of REVENGE!

Phil: See – I told you …….. REVENGE fuelling innovation yet again. But just picking up on your point about Lola – Ford did indeed buy a couple of Lola Mk 6 cars but more importantly they also bought consultancy from Eric Broadley (head of Lola) to lead development of the GT40.

Rog: So Eric promptly packed his suitcase and headed across the pond to Dearborn then?

Phil: Nope – quite the opposite. Ford sent a couple of their guys across the Lola’s base in Bromley before establishing their own Ford Advanced Vehicles base on ‘tother side of London in sunny Slough (yet to be twinned with Modena)!

Rog: Yes, Slough doesn’t have quite the same ring to it as Maranello or Sant’ Agata. So the Lola Mark 6 badge was swapped for a Ford GT one and they all raced happily ever after?

Phil: Not quite. It took two long years of development for the GT40 to become fully competitive at Le Mans after which the car dominated this classic race for four years on the trot. Initial race team management prior to first Le Mans win was handled by John Wyer but poor results obliged Henry Ford to pass the race management baton to US race Ace – Carroll Shelby. Thankfully, British input was maintained through the involvement of racing driver Ken Miles who took-on the vitally important task of race car development. He also drove one of the winning GT40’s at Le Mans in ’66.

Rog: The pressure from Ford to perform must have put a lot of stress on the development team.

Phil: The pressure must have been immense but it’s extremely rare for manufacturers to get new race cars completely right “out of the box” even if they have a long and successful racing heritage. I once asked Richard Attwood what it was like to drive the first Porsche 917’s at over 200mph down the Mulsanne straight. “Bloody dangerous” he replied before explaining that the wayward tendencies of early cars were eventually resolved by the Porsche factory through race development but this just emphasises how difficult it is to build a winning car even for companies such as Porsche.

Rog: Ahh the 917 – I assume your referring the the ‘K’ as in Kurzheck variety of 917 Phil? Having invented the kamm-tail it’s odd how the Germans subsequently forgot about it with the Audi TT which had a tendency to throw itself into the scenery until a spoiler was retrofitted!

Phil: Like the early TT’s Rog, you’re going off on tangents again but you’re right Wunibald Kamm was a pioneering aerodynamicist who’s theories were only starting to be fully exploited in the ’60s and ’70s. Coming back to the GT40 however – design and development did eventually come good albeit with the help of serious bank rolling from Ford’s bottomless coffers. But, money isn’t everything and Ford were up against some very serious competition.

Rog: So Ford’s revenge was complete?

Rog: Yes I suppose you could say that. With the GT40, Ford brought 6 years of Ferrari dominance at Le Mans to an end and won there themselves 4 years in succession. America also broke its duck in terms of having a winning car on the Le Mans podium. It’s some story and one which I believe will be the subject of a new film – Ford v. Ferrari which is set to star Matt Damon as Carroll Shelby and Christian Bale as Ken Miles.

Rog: What, like Kramer versus Kramer …… but with cars?

Phil: Let’s hope not, Rog. I’m quite looking forward to seeing the Ford v. Ferrari film but whether it’ll overtake Steve McQueen’s Le Mans is another matter. If you’ll pardon the pun.

Rog: Excused. So Phil, the moral of the tale is: pick your fights carefully or like Enzo Ferrari – you’ll become a one-man creator of arch competition and REVENGE.

Phil: Enzo clearly didn’t mind who he hacked-off but I suspect he would not survive with that sort of attitude these days. With Fiat’s financial backing Ferrari has certainly turned out some great road cars of late – though at a price. But, they’ve clearly lost their winning ways in F1. Ferrari also abandoned the top echelons of Endurance Racing many moons ago – content to compete in the lowly GT class. Fundamentally, Ferrari has lost the cachet of its ’60s and ’70’s cars – at least from my perspective. Can you see a F12 TdF being as recognisable or as revered as the 250 GT let alone the GTO, in 40 years time?

Phil: Nowadays – car design is uniformly corporate, computerised and laser guided, with new models churning off the production line just-in-time to meet latest market trends and fashion foibles. Car companies managed by bean-counters and MBA-wielding bureaucrats. Where’s the emotion, the passion and the gut-feel for the right design or the right lines demonstrated in genius-form by the likes of Bizzarrini, Lamborghini, Stanzani, Scaglione, Gandini, Dallara, Bertone, Zagato, Pininfarina and Guigiaro?

Rog: Well said, let’s raise a glass to them all and to that bitter-sweet little emotion …………………… REVENGE!!!

For earlier parts of this conversation – see:-