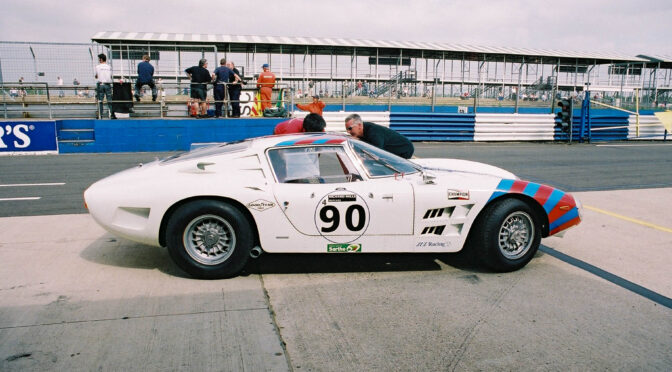 “So there we were down the Old Bull & Bluster savouring the delights of their on-tap beery lubricants when the conversation turned to …………………… REVENGE!”

Rog: Lovely. Mud in your eye. Now you were saying?

Phil: It’s just that I find it very difficult to get excited about cars designed after the ’70’s.

Phil: What particular examples are you thinking of?

Rog: The Mangusta for one, Phil, or the Carabo, Countach, Miura, Berlinetta Boxer, Khamsin and a whole raft of fantastic concept cars …… er …….. like the Carabo. I did mention the Carabo didn’t I?

Phil: Ah yes – The Sotheby Special …….but let’s leave Ogling out of this if you don’t mind! The rest of the cars you mention I agree with but I think the period of design perfection needs to be extended to include the ’60s.

Rog: What? You’re not suggesting the Ford Anglia was a ground breaking car design are you?

Phil: Very droll. As you know all too well – the ’60s and ’70s delivered some fantastic car designs!

Rog: I’m with you on that mate. I just love the Tipo 33 Stradale. That car makes me inadvertently dribble.

Phil: You really ought to see your GP about that dribbling Rog.

Rog: Hold on old chap. I’m sure you’re not immune to a bit of ‘car-induced-dribbling’ yourself.

Phil: Fair do’s. I am prone to a bit of ‘Scaglione Syndrome’ from time to time. Just don’t mention Franco’s name otherwise it’ll set me off. Anyway – coming back to the point – the thing that really fascinates me is the degree to which REVENGE rather than necessity was the mother of invention in terms of car design during the ’60s and ’70s.

Phil: Are you sitting comfortably? Then let me begin. The three most obvious examples of REVENGE-fuelled design during that period came from Giotto Bizzarrini, Ferruccio Lamborghini and Henry Ford (the second).

Rog: I think I can see where you’re going with this but please continue.

Phil: Let’s start with Giotto. Whilst he was working at Ferrari – he was intrinsically involved in the design of the Testa Rossa, the 250 GTO SWB, and perhaps most significantly the 250 GTO. Then Enzo gave Giotto (and five of his engineer colleagues) the boot, in a fairly typical fit of Ferrari pique.

Rog: Well, the ‘ol Commandatore was bit handy like that wasn’t he?

Phil: I suspect that Enzo lived to regret it as Giotto went-on to design some fabulous cars which successfully competed against Ferrari products on the road and on track. These included – the Ferrari Breadvan (built for Count Giovanni Volpi), the Iso Rivolta and Iso Grifo for Enzo Rivolta. Then there’s the stunningly exotic V12 engine that Bizzarrini created to power Lamborghini’s cars for over 50 years (1963 too 2011). To cap it all – he went-on to build his own Bizzarrinni badged supercars in his home town of Livorno in the form of the Strada 5300 GT and the Corsa.

Rog: That Lambo V12 has to be one of the all time great engines.

Phil: Most definitely and on that basis alone – Giotto deserves a place at the Top Table of Automotive Designers but when you look at the entirity of his post-Ferrari output – it was a magnificent act of REVENGE against his former nemesis – Enzo Ferrari!

Rog: And the Bizzarrini 5300GT was also a gorgeous motor, Phil.

Phil: It most certainly was. Beautiful and potent …… and when set alongside his design of the stonking great and incredibly long lived Lambo V12 engine – it really underpins the breadth and depth of Giotto’s engineering and design brilliance.

Phil: Mmmm – kind of. I guess one could question why the designer of the superb Lamborghini V12 engine opted to fit the far more prosaic 5300cc small-block Chevy engine into his Iso and Bizzarrini creations. But I actually think this was the mark of a brilliant and practical engineer because he expressly chose to use a readily available, durable and highly tune-able American engine rather than try to create another power-plant from scratch. Giotto focussed instead on carefully placing the engine as low down in the engine bay and as far back in the chassis as possible to make the car virtually mid-engined!

Rog: That reminds me – there’s a brilliant video of some bloke from Northern Italy ….the Veneto I think…..who owns a working 5300 GT. A real aficionado of the marque, the kind of bloke who casually mentions that he once owned Gmund Porsche 356 Number 4. Like the fourth Porsche car ever made!!!…..Which he “got rid of” along with his wife. Some divorce settlement! Catch it here folks:- https://www.youtube.com/watch?v=Z

Phil: A truly inspiring video of one extremely fortunate car owner, Rog. But talking of Italian sports car enthusiasts that brings me back to REVENGE – this time in the form of Ferruccio Lamborghini!