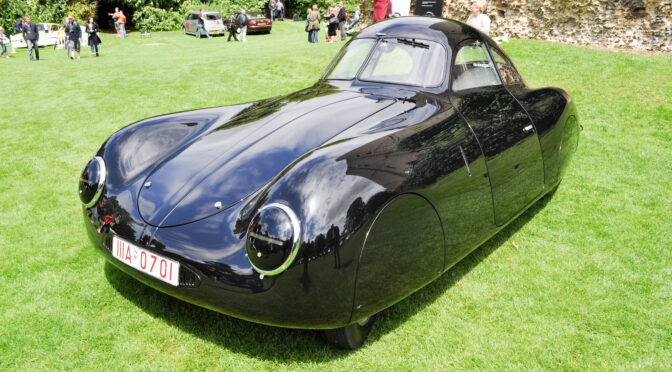 Darwinian principles can be applied as much to automotive design and manufacturing as they have been to evolutionary biology. “Survival of the fittest” has been the recipe of enduring success for a number of car marques but it has also seen the extinction of many more.

From the very first cars – certain marques have driven down developmental cul-de-sacs whilst others have, through inspired progressive improvement, survived to the present day.

As one of the most successful surviving marques – it’s interesting to analyse some of the factors and earlier designs that assured Porsche’s initial establishment, success and ultimate longevity as a manufacturer of road and race cars.

Modern Porsche cars incorporate state of the art features and materials to deliver ultimate performance without sacrificing economy, safety and comfort but brand identity and values are also of great importance.

In many instances the systems used on road cars are initially developed and refined on full blooded race cars. You just have to look at the energy recovery and hybrid capability of the Porsche 919 Le Mans Prototype cars to see what will become standard features on future models.

Pushing technical boundaries through racing development is not a modern phenomenon and Porsche in particular have tapped-into their design and development heritage to directly influence its new cars.  This post explores just a few examples of how this was achieved.

The Porsche 919 which just secured the 2016 World Endurance Championship from both a constructor and drivers perspective is an incredibly complex and sophisticated race-car incorporating electric hybrid technology and energy recovery systems.

A number of these innovations already feature in standard Porsche road cars and also in their flagship 918 Spyder hybrid sportscar.

What is less well known is that that these innovations date back to 1895 when as a young Austrian engineer in his first job –  Ferdinand Porsche first developed “System Lohner-Porsche” which combined hub mounted electric motors driving two or four wheels and energised by a small petrol engine.

The Lohner-Porsche Mixte Hybrid was not a commercial success due in large part to the massive weight of its batteries (1.8 tons) but it launched the career of Ferdinand Porsche who’s next move was to car pioneers Daimler Benz.

It’s worth noting that “System Lohner-Porsche” was put under close scrutiny by Boeing and NASA and it provided the design principles for the Apollo programme Lunar Roving Vehicle.

The lead-up to WWII resulted in a frantic race-car development power struggle between the well established car manufacturing pioneer Mercedes and the young upstart – Auto Union who battled things out during the glorious Silver Arrows  dominated period of motor racing.

Auto Union was an amalgamation of four struggling German car manufacturers – Audi, DKW, Wanderer and Horsch.  Each company was represented by a ring in the badge which survives to this day on Audi cars. 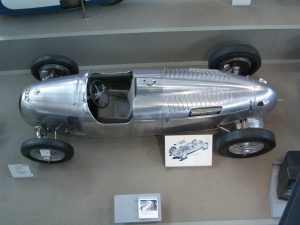 Porsche brought with him experience in designing “conventional” race cars but with Auto Union he was give free rein to plough a very individual furrow by adopting a mid-engined design decades before this became the norm for racing cars.

In Type A, B and C guise using powerful mid mounted V16 engines – they developed a reputation for being difficult and dangerous monsters to drive but this was successfully counteracted through the employment of some brilliant drivers.

The later V12 D-Type Auto Union was designed by Ferdinand Porsche protégée Robert Eberan von Eberhorst who later collaborated with Ferry Porsche in the design of the Cisitalia 360 and the very first Porsche badged car – the 356.

It is interesting that the very first Porsche built was a mid-engined two seater but the practicality of incorporating small rear seats dictated movement of the engine behind the rear axle and this resulted in the birth of the rear engined Porsche 356!

Just four designs after the pivotal Type 60 (better known as the VW Beetle), Porsche’s Type 64 design provided a fascinating insight into what was to follow in the form of the 356 and subsequent Porsche road and race cars.

The sweeping aerodynamic lines of the Type 64 were based upon an earlier design for the mid-engined V10 powered Type114 or F-Wagen which was sadly never built. The Type64 was was entered in the 1939 Berlin to Rome road race but the event was abandoned at the outbreak of WWII.

The bulbous cabin and air vents behind the rear screen give more than a hint of the precursor Beetle but the extended front and rear bodywork and fully enveloped wheels are pure 1930’s Streamliner as epitomised in the Auto Union Streamliner and the still-born Type114.

Only one of the three Type 64 cars originally built survived the war in the care of the Porsche family before they had it restored by Battista (Pinin) Farina and sold it to former motorcycle racer Otto Mathe.

The car pictured here at Hedingham in 2012 is a fantastic recreation which has allowed this pivotal design to be shared with people who would be otherwise oblivious to its existence.

When it first saw the light of day in 1939 – it must have looked like a spaceship in comparison with the running-boarded and cycle-winged cars of the day.

It would be natural to assume that the magnificent flat-12 engine at the heart of the iconic 1970’s Porsche 917 was a high capacity creation of the flamboyant ’70s.

In reality but it was actually preceded by a 1.5 Litre supercharged and mid mounted flat 12 engine used in the Cisitalia 360 Grand Prix car of 1947.

Going even further back in time – the Cisitalia engine was in turn based upon an earlier 1939 Auto Union design for a 1.5 Litre flat-12 engine with two stage supercharger.

Porsche’s race car design for Piero Dusio’s Cisitalia  company was massively important for Porsche as the money from Dusio’s commission not only secured Ferdinand Porsche’s release from a prison in Dijon, it also kick started the establishment of Porsche’s first formal manufacturing site in an old sawmill in Gmund, Austria until the company was able to move back to Stuttgart. 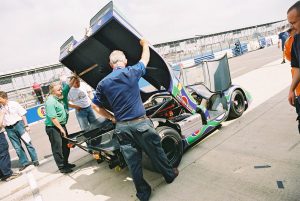 The rest is history!