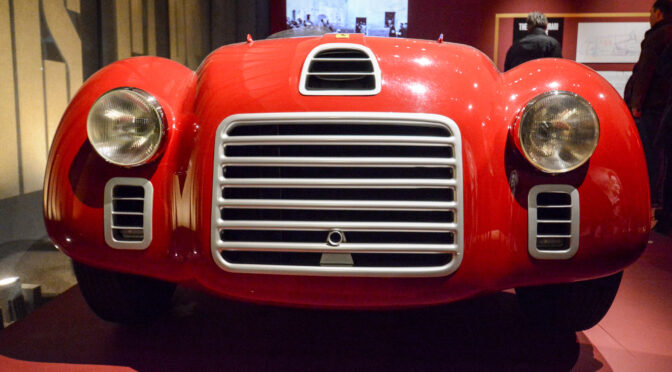 I can se the headlines now – “Dyed in the wool classic Porsche man attends Ferrari exhibition!” The shame of it…………..I’ll be drummed out of the Porsche Owners Club!!!

In my defence – it was a bitterly cold and snowy day in London,  I needed an automotive pick-me-up and a slippy/slidey drive in my old 911 was out of the question so a trip to the Design Museum to see the Ferrari Under the Skin exhibition was my only option m’lud!

This was my first visit to the relocated Design Museum which is in what was the old Commonwealth Institute off Kensington High Street. Nice location but it felt to me that the interior space was grossly under-utilised as it seemed to be all foyer, stairs and landings with precious little exhibition space.

I digress. Onto the Ferrari exhibition:-

The exhibition provided a interesting insight into Enzo Ferrari’s early experiences as a racing driver – competing in his first race in 1919 for Costruzioni Meccaniche Nazionali (C.M.N. for short).

There were some great photos of him in his race cars and as a friend recently pointed out – the young Enzo bore a remarkable facial similarity to Arsenal’s Mesut Ozil……..or should that be the other way around!!!

In 1920 – Enzo stepped-up to join Alfa Romeo but after some significant race successes over a number of years he gradually recognised his own limitations as a racing driver. The untimely deaths of some very talented drivers and the birth of his first child (Dino) prompted him to move from being a racing driver to becoming a racing team manager.

Scuderia Ferrari was formed in 1929 with the sole purpose of acting as Alfa Romeo’s racing team at a time when Alfa were building some of the most successful racing cars and their racing team was consequently attracting some of the most talented drivers of the period and possibly of all time. My favourite was Il Manotovano Volante (the fast Mantuan) – Tazio Nuvolari.

The Ferrari emblem was adopted whilst the Scuderia raced Alfa Romeo’s. It was borrowed from the family coat of arms of 1st world war fighter ace Francesco Baracca who also displayed the prancing horse on his plane.

Enzo was acquainted with Baracca and was given permission to use the prancing horse by Baracca’s family after the pilot was shot down and killed. Enzo simply added the yellow background from the flag of his Modena home town.

After Alfa brought their race team management in-house in 1937, Enzo remained as team manager for a while but eventually left with the sole intention of building his own cars. WWII go in the way but as soon as hostilities were over he took the enormous risk of establishing a new factory in Maranello where he formed Ferrari S.p.A. in 1947.

This was the very first car to bear the Ferrari name. Built in 1947 as a racing sportscar – it is beautiful in its simple elegance. Only two cars were ever produced.

The betting heart of this car was a jewel like 1.5 Litre V12 engine created for Ferrari by the brilliant engineer Gioacchino Colombo. This work of art had a single overhead cam, twin valves per cylinder and it was topped off by three double choke Weber carburettors.

Given that most of the racing competition at that time were using straight six (E.R.A.) and straight eight (Alfa) engines often with the aid of superchargers – Ferrari’s choice of a V12 configuration was surprising. He had however been impressed by an American Packard V12 and was anyway keen on building a V12. The car also featured a 5-speed gearbox.

Built between 1948 and 19 53 – the 166 was an evolution of the 125S and it marked the first use of an Italian Carrozeria design house for the bodywork. In this case the bodywork was the creation of Carlo Anderloni working at Carozzeria Touring of Milan.

With so many Carozzeria to choose from – Enzo probably opted for Touring as it had arisen from the earlier Carozzeria Falco run by Vittorio Ascari, the older brother of Enzo’s late fellow racing driver Antonio.

The particular 166 in these photographs is a rather special two-tone blue/green 1950 166MM owned by Gianni Agnelli the head of Fiat (and later Ferrari). Other examples of the 166MM won the Mille Miglia and Le Mans 24 Hour Race so this was no autostrada cruiser. With it’s Colombo V12 engine expanded to 2.0 Litres it was a full-blown race car albeit with beautiful and ground breaking barchetta bodywork by Touring of Milan.

Although preceded by the 250 P (for Prototype) – the 250 LM was Ferrari’s first proper mid-engined sports car available for the general (racing) public to buy.

Enzo famously resisted the move from front to mid-engined configuration in racing and sports cars so the 250 LM was quite a milestone. It also featured disk brakes – another development that Enzo was late to adopt.

After its introduction in 1963 – it was raced hard and eventually won the ultimate test of sports cars – the Le Mans 24 Hour Race in 1965 courtesy of the North American Racing Team and its drivers – Jochen Rindt, Masten Gregory and Ed Hugus.

I used to be very keen on the 250 GTO and the later 275 GTB but I now think that the SWB 250 GT is a far more beautiful package. The lines of the car are sublime from any angle.

It was produced between 1953 and 1964 which was to my mind a classic period for Ferrari as they were able to draw upon the design talents of Giotto Bizzarrini and Sergio Scaglietti and the Carozzeria input of Pininfarina, Vignale and Ghia.

This car was the Rob Walker (from the Johnnie Walker Whisky family) Racing Team car which was very successfully campaigned by Stirling Moss. The blue and white livery really suits the car.

There was also a beautifully presented 250 LWB rolling chassis (awaiting its body. Seeing the car in its naked form highlights the precision engineering of components that rarely see the light of day.

This car was indeed an experimental car which demanded various aerodynamic tweeps by Giotto Bizzarrini to address its rather wayward bahaviour at speed. Careful design and fitment of a spoiler and wing sorted out these issues.

The 250 GTO was Giotto Bizzarrini’s swan song at Ferrari. He was sacked along with a number of other engineers by Enzo in a fit of pique when they dared to question his authority. We should be grateful that Bizzarrini’s development of the GTO was almost complete when he left and we should always be grateful that he was able to move-on to create some more fantastic cars (Iso Rivolta, Iso Grifo, Bizzarrini Strada and Bizzarrini Corsa) and engines (the wonderful Lamborghini V12).

The low frontal area, low centre of gravity and central placement of the front mounted engine made the GTO incredibly competitive on-track and some of the surviving cars are now the most expensive and exclusive cars on the planet.

The bright green livery of this GTO give it away as being formerly owned and raced by gentleman driver David Piper.

The 275 cars were built between 1964 and 1968. They were powered by a 3.3 Litre V12 engine and were the first Ferrari’s to feature a transaxle transmission.

The long nose of these cars in relation to the cockpit and short rear end generate imbue it with an aggressive stance.

Visually the bodywork is quite different to models produced immediately before and after but it was a Pininfarina design and was quite a handsome beast in its day. Not sure if it has stood the test of time.

Its successful racing pedigree such as at Daytona (hence the name) and Le Mans (where it achieved several class wins) prove it was a highly competent race car and an effective continent shrinking GT touring car. I saw this car going up Kop Hill Climb last September!

The F40 was built between 1987 and 1992 and was approved by Enzo Ferrari to celebrate the company’s 40th anniversary. It was born out of a number of prematurely obsolete 288 GTO Evolution cars built to compete against the Porsche 959 in Group B racing had that racing category not been closed down.

The resulting F40 was built purely for speed with absolutely no creature comforts underneath its Pininfarina designed Kevlar, carbon fibre and aluminium bodywork. The bodywork includes classic Pininfarina NACA ducts and has more than a hint of earlier model styling albeit in a rear winged and steroid pumped-up form.

Built between 2013 and 2013 in Coupe and Apart forms – “The Ferrari” was and is very expensive and it just leaves me cold. I’m sure it’s incredibly advanced and super efficient but it just looks like some (any) fantasy supercar prototype – not a Ferrari.

An enjoyable little exhibition. I was particularly interested in the older cars but all of the cars, body buck, components and period photos were well represented. The Ferrari Under The Skin exhibition is well worth a visit before it closes in April.