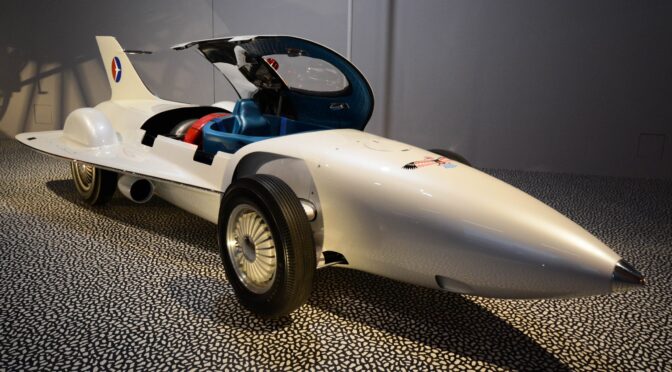 Cars: Accelerating The Modern World is a curious but far too small exhibition in the Sainsbury Gallery in the V&A celebrating the influence of automotive development on the modern world.

Whilst the exhibition features some interesting vehicles, bits & bobs of automobile ephemera and some engaging video footage, its limited size and scope make it feel a little random in terms of what is and isn’t displayed.

To be fair, representing the evolution of cars is a massive remit which completely dedicated automotive museums struggle to meet so the V&A exhibition had to focus through necessity on stylistic and cultural influences. I’m not sure that this pulls it off as the exhibition is just a tantalising taster of what is an enormous subject.

Following a vaguely chronological sequence, the Daddy of them all, the Benz Patent Motorwagen of 1886, simply had to be displayed to show how it all began. This strange vehicle looks like the love-child from an illicit liaison between a cart and an early tricycle!

Founded in Barcelona in 1902 by Emilio de la Cuadra and Marc Birkigt the name of the company reflected the respective nationalities of its founders (Spanish and Swiss).

The company initially produced a range of luxury cars with large capacity engines but at the outset of WWI, they switched to manufacturing cast block aero engines which reliably powered over half of the French and British fighter planes built during that conflict.

Automobile production resumed following WW1 with manufacturing and assembly plants in Spain and France. War intervened again during the Spanish Civil war when facilities based in Spain were commandeered to manufacture aero engines, cannons and trucks.

This particular piece of Hispano-Suiza art is an extremely rare and beautiful H6B Skiff Torpedo dating from 1922. The skiff bodywork was was designed by Jean-Henri Labourdette and used boatbuilding technology to create a wonderfully lightweight wooden body held together by copper nails.

Founded in Tours in the Loire valley by Emile Delahaye in 1894, the company later moved production to Paris in 1898. Delahaye cars were involved in car racing form the outset of the sport and this helped to accelerate their technical development. In fact Delahaye established the very first Grand Prix race in 1906.

WWI led to the company into manufacturing more utilitarian trucks and marine engines but this didn’t stop them creating one of the first V6 engines and the Titan marine engine which powered the La Dubonnet speedboat to a World Water Speed record.

Increasing post-WWI dominance of motor racing by the all conquering German manufacturers (Mercedes and Auto Union) led to the French government to offer a Million Franc prize to any French manufacturer capable of breaking that dominance.

Delahaye achieved this in with a Type 145 car driven by Rene Dreyfus to first place finishes at the Pau and Cork Grand Prix races. Delahaye race cars showed that the need for on-track potency did not preclude wonderful styling.

The Tatra V8 is such a weird but wonderful creation. The Tatra company was derived from a very old establish Czech coach building company (i.e. they built horse drawn coaches from 1850) who moved into building railroad cars in 1891 and car manufacturing in 1897. The design and engineering Tatra cars was in the capable hands of Hans Ledwinka and Edmund Rumpler.

Ledwinka later worked with the highly influential Austrian aerodynamicist Paul Jaray who had cut his teeth designing airships before applying aerodynamic principles to cars. The result of this collaboration was the worlds first aerodynamically designed car – the Tatra 77.

With its rear-mounted air-cooled V8 engine and rather bulbous bodywork with vertical fin jutting from the sloping rear end, you can see clear similarities to the VW Beetle and early Porsche cars. The fact that Ledwinka associated regularly with Ferdinand Porsche in the years leading up to WWII, makes it inevitable that Tatra car designs were a massive influence on VW Beetle and early Porsche car design

With Messerschmitt barred from building aircraft in the wake of WWII, the company had to look at other avenues to explore and in 1952 Fritz Fend (one of their aircraft engineers) came up with the idea of building a small lightweight three wheel cabin scooter.

Post war austerity gave rise to a plethora of “Bubble Cars” at that time to a provide cheap and economical solution to the challenge of mobilising the workforce across Europe.

Messerchmitt’s first cabin scooter creation was the KR175 which was replaced by the KR200 in 1955 with manufacturing continuing until 1964. Rather amazingly, 30,286 KR200’s were built but after Germany became part of NATO, Messerschmitt was allowed to return to aircraft production.

Rumours that that the cabin roof was made from discarded fighter cockpits is sadly untrue!

The ‘Stang is a classic American car and just to prove that, classic car chase scenes from Bullit were being played on a screen behind the car that was on display.

I sincerely hope that Ford indulged in some canny product placement for Bullit as the film was one of the best adverts for the Mustang that could ever have been made.

This Chevy Impala Lowrider is simply amazing. Every square inch of bodywork is painted with bold colours and angelic images representing the dear departed members of the LA car club from which it sprang.

The boot is filled with gas bottles operate the air suspension and most of the metal surfaces in the engine bay are engraved to stunning effect.

An accompanying film explained the the background to they car and the lowrider movement through the voice of this car’s creator. I’m not a particular fan of American cars or lowrider but one cannot fail to be impressed by the herculean efforts put in by the enthusiastic owners of these cars to make them unique.

Ferdinand Porsche’s brilliantly simple and functional design of the Volkswagen Beetle gave rise to the Porsche marque via the war blighted Type 64 and then the 356 which initially used VW Beetle mechanical components.

Few would have through that this utilitarian vehicle would have given rise to such a fantastic racing and sports car dynasty.

Like a VW Microbus that’s been shrunk in the wash – the Fiat Multipla is a scaled-down people carrier classic. It built upon the fantastic Fiat 500 concept to deliver a slightly expanded vehicle to transport families of tiny Italians families their country in comfort and style. Around 130,000 were built between 1956 and 1969.

On one level, the styling is quite odd with its bluff frontal facade, sloping rear and front suicide doors which give the illusion that it should be travelling mostly in reverse. The positioning of the steering wheel just behind that bluff front however gives lie to that theory.

It’s a cute car and the wife wants one. End of discussion!

This wasn’t even in the exhibition. It was placed instead in the entrance to the Sainsbury wing as a teaser and as teasers go, it probably works as its stunning bodywork cannot fail to evoke interest and delight.