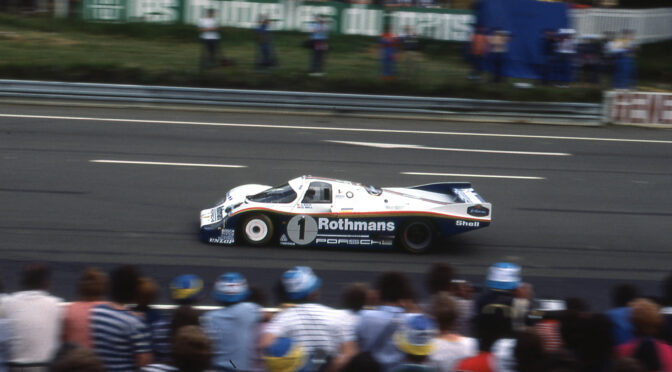 I knew it was my lucky day when I received a call from the Porsche Club GB office to offer me a last minute place for the “Evening with Jacky Ickx” event they had organised at Porsche Centre East London.

Upon arrival – I was chatting with Ed Pike (co-organiser with other half Nick of of PCGB London Region) and another club member over a glass of wine when a dapper gentleman wandered over and introduced himself to us with – “Hello – I’m Jacky”, before shaking each of us by the hand.

It was none other than Belgian motor racing legend – Jacky Ickx!

What a lovely chap – charming, self effacing and incredibly polite in the face of the small army of motor racing (and especially Porsche racing) nerds gathered to get some personal insights into the long and incredibly successful racing career of Jacky Ickx.

This was a nice prelude to him opening the London Classic Car Show  which featured a well deserved tribute to Jacky Ickx and to the cars he raced. These included single seater F1 and F2, Endurance and Rally cars from Brabham, Ferrari, Gulf-Mirage and of course Porsche.

It was interesting to hear from Jacky that he originally aspired to being a humble gardener or gamekeeper and that his lack of interest in academic achievement led his parents to tempt him towards improved performance at school by buying him a Zundapp motorcycle.

Unfortunately for his parents but luckily for the world of motor racing – it was racing his motorcycles which gave Jacky “a taste of the podium” as he won 8 out of 13 races in his opening European 50cc trials season.

Probably “encouraged” by his motoring journalist father Jacques – Jacky switched from to two to four wheels thereby following the route of other successful motorcyclists turned motor car racers including Tazio Nuvolari , Bernd Rosemeyer, Hans Stuck and our own John Surtees and Mike Hailwood.

Jackie Ickx lived through that wonderful period in the ’60’s and ’70’s when racing drivers were not restricted to one specific discipline at a time. Just imagine Lewis Hamilton jumping around racing Saloon Cars one week, F1 the next and then an outing in F2 with a smattering of Endurance  racing and Rallying.

With very few exceptions – modern top-flight drivers are locked exclusively into their particular disciplines with a move to other disciplines normally only possible through a permanent move e.g. Mark Webber’s move from F1 to Endurance prior to his retirement.

Jacky Ickx however along with many of his contemporaries filled their race year diaries with a wonderfully eclectic set of races across all disciplines including in Jacky’s case – Saloons (Lotus and BMW), F2 (Matra Cosworth), F1 (Coopper Maserati, Ferrari, Brabham, Lotus, Wolf-Williams, Ensign and Ligier), Endurance (Ford GT40, Gulf-Mirage, Porsche 935, Porsche 936 and Porsche 956) and Rallying (in a variety of cars including the Porsche 959).

As a sign of future his endurance racing potential –  Jacky won the prestigious 1965 Spa 24 Hour race this time in a BMW 2002 Tii.

Jacky’s single seater racing career started in 1966 driving a Matra MS5-Coswrth for team manager Ken Tyrrell. In 1967 he graduated to an F2 Matra MS7 1.6 Litre car up against much more powerful F1 cars and more experienced drivers in fate form of Denny Hulme and Jim Clark.

Also in 1967 Jacky moved secured his first F1 drive in a Cooper T81B-Maserati before securing a works drive for the Ferrari F1 team for the 1968 season. This challenging season saw him achieve his first F1 win at Rouen but he also broke his leg during practise for the Canadian Grand Prix which meant the season ended with Graham Hill, Jackie Stewart and Denny Hulme ahead of him in the drivers championship standings.

During 1969  – Jacky raced for the Brabham F1 team with limited success before deciding to return to Ferrari for the 1970 season.

Jacky stuck with Ferrari for three seasons from ’70 through to ’73 driving the Ferrari 312B2 and later the 312B3. He battled valiantly against Jochen Rindt who was tragically killed at Monza but Jacky could not overtake the points haul accumulated by Rindt through winning 5 five of that season’s 9 F1 races. Rindt remains the only driver to win an F1 championship posthumously.

The main competition for Jacky during the ’72 and ’73 seasons was another Jackie……Stewart.

For 1974-75 – Jacky had a couple of challenging seasons with Team Lotus racing the innovative but often problematic Lotus 72 and 76 cars up against stiff F1 competition from drivers such as Ronnie Peterson, Mike Hailwood, Jochen Mass, Carlos Reutemann, Mario Andretti and Patrick Depailler.

Between 1976 and 1979 – Jack raced for Wolf-Williams and Mo Nunn’s Ensign Racing team up against other up-and-coming drivers like James Hunt and Chris Amon but the cars he was supplied with were simply not competitive enough at that time and his F1 career ended in 1979 with a final drive for Ligier.

Jacky secured the first of his six Le Mans victories with co-driver Jackie Oliver in a thoroughly out of date but ultimately more reliable  Ford GT40.

In 1975 – Jacky secured his second Le Mans victory with Derek Bell in the Gulf-Mirage GR8.

Jacky confirmed during the evening that driving the Baby Porsche 935 was a very special experience, eclipsed only by driving Moby Dick – the subsequent 935 development.

His fourth victory came a year later in 1977 again in a 936 but this time with Jurgen Barth and Hurley Heywood as co-drivers. Jacky describes this as his favourite win of all time as it incorporated a roller coaster of events which initially saw the car he shared with Henri Pescarolo retire.

Porsche then took the tactical decision to transfer Jacki to join Barth and Heywood in the other 936  which was then in a very lowly  42nd position. Jacky helped to drag the car back up the field only to hit another mechanical problem in the early morning. This was overcome by “switching off” one cylinder enabling the car to continue racing and to achieve ultimate victory.

Jacky achieved one further Le Mans victory in a Porsche 936 with Derek Bell in 1981 before Porsche entered their glorious Group C period of endurance dominance.

The Porsche 956 was a winning car straight out of the box and it tool Jacky and Derek Bell to Le Mans victory in 1982.

Possibly going full circle to his early trials motor cycling experiences – Jacky competed in various rallies but most famously the gruelling Dakar Rally between 1981 and 2000.

Given his busy driving career it’s hard to believe but Jacky also managed to fit-in winning drives the Hardie-Ferodo 1000 race and Bathurst 1000 in Australia. He was successful in the revived Can-Am series and even attempted the Daytona 500.

The Evening With Jacky Ickx

It was an honour to meet the man who I watched race so many times during the ’80s.

During his interview with Henry Hope-Frost he was extremely modest – always emphasising the team effort involved in any race success from car designers , engineers, race technicians etc. with the drivers contributing the final 20%. He also cited his Mother’s oft-repeated advice – “take care and don’t drive too fast”!

His answers to particular questions were sometimes tantalisingly vague but at times philosophical in order to avoid bravado or to give any negative opinion of particular cars or drivers.

In signing-off from his interview – Jacky attributed his longevity, success and survival through one of the most brutal and unforgiving era’s of motorsport as being purely down to luck!