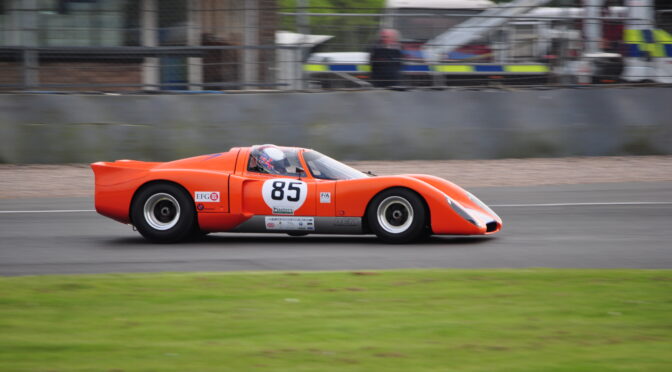 I’ve always liked Donington as a racing circuit. Like Brands Hatch – its setting in rolling countryside makes it much more visually interesting for spectators than the airfield-flat-frozen-tundra of Silverstone.

I used to visit Donington regularly many years ago to attend historic racing events and it’s really great to see this historic racing tradition being successfully revived over the last couple of years under the Wheatcroft family’s fantastic stewardship.

From the vast array of earth moving vehicles parked at the entrance and evidence of what they’ve been doing inside  the circuit – its clear that Donington is slowly but surely being remodelled after the disastrous attempt to convert it into an F1 circuit simply to pander to Ecclestone’s pathological hatred of Silverstone and the BRDC.

The Donington atmosphere is also as it was – open, friendly and catering really well for classic car enthusiasts by providing cheap ticket deals for car club members, free access to the paddock/garages, Car Club reserved parking in the infield and opportunities for owners to drive their beloved classics around the circuit on parade laps during breaks in the racing.

There was a wealth of interesting cars to be seen in the paddock, on track and in the infield car club parking areas. Here are just a few:-

In 1952 Donald Healey was invited by Len Lord who headed up Austin to set up a joint venture to produce sports cars (utilising Austin components) in order to join the profitable export drive of British-made sports cars to the USA and other countries.

This resulted in the creation of the Sprite (using Austin A35 components) and the 100/4 (using a 4 cylinder Austin truck engine and gearbox). Later versions of the Sprite were also sold as badge engineered

I remember reading once that – such was the power and torque of the big 4 cylinder truck engine inserted into the original 100/4 – first gear was superfluous. Austin Healey therefore simply blanked it off leaving just 3 forward gears but with overdrive on all 3. I love simple engineering!

Enormous numbers  of these cars were built and they were a great British export success. Interestingly the Big Healey’s were built under license by Jensen Motors in West Bromwich. Jensen also built the Volvo P1800……..as well as their own cars of course (most notably the 541, CV8 and Interceptor).

Chevron racing cars always seem to turn out in abundance at Donington and a host of beautifully prepared cars featured in the Le Mans Style Sports Cars race.

Chevron produced some very successful cars in the 60s and 70s (most especially its B8 and B16 models) and it’s thankfully another company that has been revived (since the death of it’s founder Derek Bennett) to support the old cars and to produce continuation models.

Most cars are powered by BMW 4 cylinder 2.0 Litre engines which are mated to Hewland gearboxes but all of the component parts – chassis, body and mechanical elements come together into a beautiful and amazingly competitive package. They really are like slightly scaled-down Lola’s and they invariably punch well above their weight.

It was nice to see so many Frazer Nash cars participating in  the event. This quintessentially British manufacturer also became the first official UK importer and assembler of BMW cars with the Frazer Nash BMW 328 in 1934 and it was the first UK importer of Porsche cars with the 356 in 1956.  In fact AFN (as it later became known) was eventually bought by Porsche GB.

The Aldington brothers took a controlling interest in the company in 1929 changing the name to AFN (Aldington Frazer Nash) and the company was finally sold to Porsche GB in 1987.

My old 911 was originally supplied through AFN’s Falcon Works base in Isleworth in Jan 1971 so that goes part way to explaining the affinity I have for this venerable marque.

Historic sportscar grids are always livened up if they include well prepared and enthusiastically driven Lister’s. I spotted one or two in the paddock but unfortunately didn’t see them race on the  day I was at Donington. NB: Must go for at least couple of days next time.

Founded in 1954 by George Lister (who sadly died in Dec 2014) in Cambridge – the original Lister Cars company produced some great sportcars based upon a tubular ladder chassis, lightweight aluminium bodywork and a de Dion rear axle utilising a variety of engines (MG & Bristol initially then moving later to Jaguar and Chevrolet power).

At one point Lister engaged the services of the great aerodynamicist & body/chassis designer Frank Costin (he was the “Cos” in MarCos – with Jem Marsh providing the “Mar”) to produce a very slippery body/chassis design. Frank also designed the body for the GP Championship winning Vanwall but he shouldn’t be confused with his brother Mike Costin (who was the “Cos” in Cosworth to Keith Duckworth’s “Worth”)!

My favourites are definitely the “Knobbly-bodied” Lister Jaguars named because of the way that the bodywork is wrapped around the protruding wheels and other components to create the knobbly appearance. These cars were enthusiastically raced in the ’50s by the flamboyant Archie Scott Brown – a close friend of Brian Lister. It was Scott Brown’s death following an accident in at Spa in 1958 that led to Brian Lister withdrawing his cars from competitive racing.

Lola’s, most especially the Lola T70 have always been a big favourite of mine. I remember the first time I ever saw a T70 was in the paddock at a historic race at Silverstone.

The driver got into car and fired it up. The brittle roar of the 5 Litre Chevy engine as he blipped the throttle made everyone in the paddock stop, listen and look for where the glorious noise was coming from – like a bunch of car mad meercats! History repeated itself at Donington with people crowding around the garage where the legendary John Surtees was warming up his Lola for a demo run.

I just don’t get all of the current fuss and nonsense about creating quiet F1 and Endurance racing cars. By definition – they need engines which make the earth move and your ears bleed. That’s what it’s all about!

earth tremors as they powered around the track. The noise they make is fantastic but they also register well up the Richter Scale.

Lola Cars was founded by Eric Broadley in 1958 and from its base in Huntingdon – it initially produced front engined sports cars before branching into F3, F2 and F1 single seaters and then mid-engined sport cars. Creation of the Mk6 Lola with it’s mid mounted Ford V8 engine sparked major interest from Ford who had a burning desire to teach Ferrari a lesson on the race track after Enzo reneged on a deal for Ford to buy them.

To ensure success – Ford secured the services of Eric Broadley to work with Roy Lunn to create the Ford GT40 which used many of the principles and design features of the Lola Mk6. Having put this project well on its way to its successful conclusion – Broadley turned his focus back to Lola and to the creation of the fantastic T70.

I love the bodywork of the T70 Coupe. It has classic late 60s/early 70s sports car styling with low nose, funny little almost gullwing doors and high all enveloping rear bodywork culminating in a sharply cut-off Kamm tail. The upswept top edge of the tail is basic acknowledgement of the need for a touch of down-force to keep these beasts from taking off at high speed circuits. This was essential in Endurance and CanAm racing. The Porsche 917 of the same period shares many of the same styling features and a stonking great engine. That’s why I love these too!

The basic similarity of these cars resulted in a number of “obsolete” T70’s being supplied by David Piper to Steve McQueen to act as stunt cars for the making of his film “Le Mans”. Some of the T70’s were fitted with false bodywork to make them look like the then more expensive Ferrari BB512 and Porsche 917 models. At that time the value of old race cars was low so their use to create high speed crash scenes wasn’t perceived to be an issue. With the benefit of hindsight it seems like it was a terrible waste of lovely machinery!

Maserati celebrates its centenary this year so a very special Maserati Centenary Trophy race was held at Donington to mark the occasion. This brought a host of fabulous cars out on track including examples of the

Formed in 1914 in Bologna by the Maserati brothers (Alfieri, Bindo, Carlo, Ettori and Ernesto) the company

produced racing cars which quickly became successful. Following the death of Alfieri in 1932 however the remaining brothers sold the company to Adolfo Orsi who relocated it to Modena. The

During the 1960s – ownership of Maserati switched to Citroen where shared technologies created the Merak,  Bora and Khamsin Maserati road cars and the Maserati engined Citroen SM. Ownership then moved to De Tomaso in the mid 1970s, Fiat in 1993, Ferrari (50% ownership in 1997 moving to full ownership in 1999) and last but not least – Maserati was partnered with Alfa Romeo under Fiat Auto in 2005.

In the Maserati Centenary race at Donington there was an exciting battle at the front between the pretty 3.00 Litre T61 Birdcage and the 5 Litre Cooper Monaco T61 with the bigger Maserati-engined car eventually winning. The race

also featured a stunning double-bubble O.S.C.A.1600GTS Zagato produced by the Maserati brothers spin-off company with the catchy name of

Wandering through the infield – I came across three Swallow Doretti’s parked together. This pretty mid 50’s sports car utilised Triumph TR2 mechanicals wrapped in what I think is a much more handsome package. It’s a shame that only 278 were built in the factory in Walsall before production was ceased.

Designed by Frank Rainbow a former Bristol Aircraft engineer – the Doretti had a Reynolds tubular steel chassis and aluminium bodywork enabling it to reach 100 mph but it also delivered good fuel economy.

As indicated in the name – the company originated from Swallow Coachbuilding which was part of Jaguar (formerly known as Swallow Sidecars or SS) before it was sold to Tube Investments.  I love these