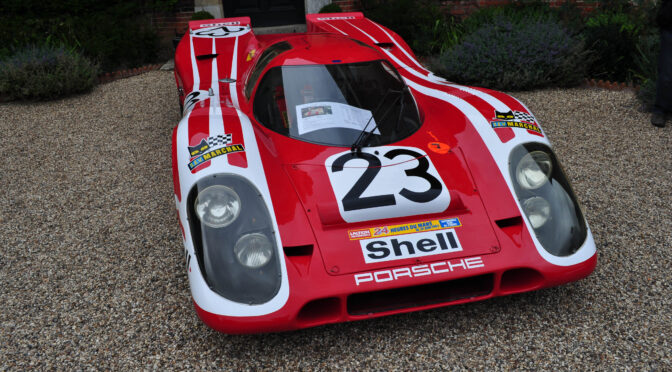 So, what’s so special about the Porsche 917?

To my mind – the things that make the Porsche 917 special are:-

1) Form and function working in harmony. A perfect combination of a lightweight but beautiful body/chassis with a brutally powerful air-cooled flat 12 engine to fling it round race circuits.

2) The 917 took outright speed to new levels at Le Mans and it took outright power to ludicrous extremes in the Can-Am series. It was designed to reach 250 mph and it achieved this on the Mulsanne Straight at Le Mans in K (K=Kurz-heck or short tail) form pretty well straight well out of the box. In Can-Am racing – engine power reached 1100bhp in race mode and a crazy 1580bhp for qualifying!

3) The 917 finally secured Porsche’s 1st outright win at Le Mans in 1970 in the capable hands of Richard Attwood and Hans Herrmann. A further outright win came the following year when a 917 driven by Gijs van Lennep and Helmut Marko crossed the line first.

I think there are many  parallels between the development of the pre-war Auto Union race cars (Types A, B & C) and the Porsche 917. Both were bold and radical Porsche designs targeting domination of the new race formulae in which they were about to run. Both had well established and highly proficient competition in the form of Mercedes for Auto Union and Ferrari for the 917.

Both cars went through a phenomenally rapid design and construction phase and both attempted to mitigate risk as much as possible by utilising as many  tried and tested concepts, technologies and components as was possible at the time.

To meet pre-WW2 Germany’s desire achieve dominance in Grand Prix racing, hill climbing and in the establishment of speed records – Auto Union opted to follow the example of the experimental mid-engined Mercedes Tropfenwagen for the overall layout of their GP car.

Under the race programme leadership of Ferdninand Piech and with the brilliant engineering input of Hans Mezger – the design of the 917 was initially focused on dominating the sportscar endurance racing category and to do this it had to combine high power output, light weight and good aerodynamics to reach an outright  target speed of 250 mph on the fastest race circuit – Le Mans. To meet this requirement – the 917 pushed new boundaries in achieving a high power to weight ratio and most importantly in overcoming the aerodynamic challenge of keeping the car on the ground at top speed.

Like the Auto Unions of a different era – the most effective testing and development of the 917 was within a competitive racing environment. In both eras this was dependent on the involvement of incredibly brave and skilled drivers and inventive and intuitive engineers. The resulting insightful input from drivers and engineers enabled improvements to the 917 to be rapidly identified, developed and tested in race conditions.

After racing pretty well every model of car at Le Mans over a 20 year period, the Porsche 917K (K standing for “Kurz or Kurz-heck” = short-tail as opposed to the 917L with L standing for “Lang or Lang-heck” = long-tail) was the first Porsche to achieve an outright win in the iconic 24 Hour Endurance Race in 1970 with Richard Attwood and Hans Herrmann sharing the driving. This launched a long period of dominance for Porsche in Endurance Racing culminating in the successes of the 956 and 962 Group-C cars of the 1980s (I saw the 956 and 962’s race and they were awesome). It separately spawned a 2 year period of complete dominance in the Canadian American (Can Am) series.

The 1970 Le Mans Race was also used by Steve McQueen and his Solar film production company to trial camera angles and camera cars in preparation for making the film “Le Mans”, the filming of which followed-on from the 1971 24 Hour race.

The success of 917s at Le Mans in 1970 (Richard Attwood/Hans Herrmann) and in 1971 (Gijs van Lennep/Helmut Marko) and McQueens personal racing success in various Porsches resulted fairly naturally in the 917 taking the heroic lead car role in the film along with arch rivals Ferrari (represented by the BB512). Many professional drivers who had competed in the 1971 Le Mans race stayed-on to work as stunt drivers for McQueen using a mix of new, old and modified ex-Le Mans race cars.

The 917 project came about as something of an accident when the FIA changed their rules to limit prototypes running in the World Championship of Makes to a capacity of 3.0L and weight of 650 kilos. The limits for sportscars however were set at a capacity of 5.0L and weight limit of 800 kilos.

The catch was that sportscars had to have a minimum production run of 25 cars and on this basis the rule makers fully expected the sportscar class to be dominated by cars from existing manufacturers such as the Ford (the GT40) and Lola (the T70) which utilised stock American V8 engines (Ford and Chevrolet respectively)  and for which the homologation numbers would not be an issue.

Porsche were happy to field a car in the 3.0L category for prototypes as their lightweight 908 was specifically built to fit that formula. What really took them and the rule makers by surprise however was the announcement by Ferrari that they would be building a brand new sportscar (the BB512) specifically to win this category. Not to be outdone by Ferrari – Porsche  opted to join the fray and the glorious 917 came into being.

To speed up initial development and to reduce development expenditure – Porsche built the 917 around a flat 12 boxer engine of 4.5L capacity and around 560bhp. This was half a litre shy of the maximum allowed capacity but

the canny method in Porsche’s madness was that it enabled them to re-use many tried and tested components (cylinders, pistons, con-rods etc.) from the current 908 engine.

From the start of initial design work to having the full homologation quota of cars parked out on the factory forecourt took just 10 months and the first cars were racing in Europe 1 month later. This represented an absolutely  phenomenal achievement which was a  clear indicator of Porsche’s intent.

To spread the workload of supporting 2 sports car programmes (908 and 917) at the same time – Porsche opted to support the 908 through it’s internal race development department whilst development and racing of the 917 was farmed out to a couple of private companies – most notably to John Wyer’s Gulf sponsored team and to Porsche Salzburg – independently run by Louise Piech (Ferry Porsche’s sister). The Porsche Salzburg team later transformed into the Martini Racing team who’s livery became so synonymous with that racing era.

It was the Porsche Salzburg team with drivers Richard Attwood and Hans Hermann who finally brought Porsche their 1st outright win at Le Mans in 1970.

The Canadian American (Can Am) Group 7 race series was in effect Formula Libre for sportscars. There were no engine capacity restrictions and it provided a platform for a whole range of fire breathing monsters from such manufactuers as Alfa Romeo, Chaparral, Ferrari, Ford, Lola, Matra, McLaren and of course Porsche.

Porsche initially tried out the 908 in Can-Am races but it proved to be woefully under-powered in comparison to the competition so they moved instead to field the 917.

Even the mighty 917 in its Endurance Sportscar form was no match for the likes of the big banger McLarens with their Chevy V8 engines of up to 8L capacity. Porsche therefore expanded their 917 engine capacity but more importantly they also added 2 massive turbochargers pushing available power up to 900bhp in the 917/10 and up to a staggering 1100/1580bhp in the 917/30KL in race/qualifying spec.

Never mind their massive bhp – in their day – these cars must have been registering on the Richter Scale! I’ve seen and heard Can-Am cars race at historic events and you can feel the rumble of their engines through the ground. It’s frightening enough for spectators, driving them flat-out must have been extremely scary.

Porsche’s developments of the 917 led to them being streets ahead of the competing cars in the Can-Am series during 1972 and 1973 and the race organisers were left with no choice but to change engine rules to bring this period of complete Porsche domination to an end.

Special Features Of The 917

Kurz Heck (short-tail) and Lang Heck (long-tail) cars were initially built to deal with standard and high speed circuits. Through the racing experience  of the 917 drivers – the kurz-heck cars with modified upswept tails became the most successful and dominant cars.

Most technical details of the early 917 cars were the same with maximum attention being paid to weight reduction but as with all race car programmes – constant development and refinement was carried out by the factory and the privateer teams to improve the rigidity of the chassis, stability of the car, power output, outright speed, reliability, braking etc.

As well as the closed coupes of the initial homologation batch – spyder versions were also developed especially for use in the Can-Am race series.

Porsche and their closely associated independent race teams managed to secure the services of some great driver pairings to develop and tame the thunderous 917 sportscars and of course to win races. A number of these drivers are still active in historic racing and demonstration runs to this day and it’s wonderful to see them still driving (very competitively) the machines that gave them and Porsche their original successes.

Canadian/American (Can Am) Series

At Silverstone some years back – I watched with fascination as a psychedelic 917 was rolled out of its garage onto the pit lane. In preparation for its stint out on track the driver and mechanics proceeded to try to start it.  After several attempts over what seemed like a 15-20 minute period it was finally realised that one of the many switches was in the wrong position. Once corrected – it erupted into life and away it went.

It struck me as odd that it should take so long to get it going but then a friend shared the following Bruce Canepa advice on the 917K Starting Procedure. This explains why it wasn’t so straightforward:-