I never got around to booking tickets for Silverstone Classic but my mate Kirk kindly offered me a spare entry ticket and a lift into the Porsche Club GB infield parking in his lovely Pastel Blue 2.2L 911S.

It’s been a couple of years since I attended this event so I was interested to see how it might have changed. The weather forecast was looking a bit ominous but with loads of interesting cars to look at around the circuit and on track and good Porscheholic company – what could possibly go wrong?

We were able to have good wander around club areas and paddocks to inspect cars, quiz owners and adjust our “if we won the lottery – no expense spared must-have car” shopping lists.

As the rain set in later in the afternoon we took shelter in the grandstands to watch Austin A35s roll majestically off the track and then witness glorious Group-C leviathans twitch, spin and roar their way around the rain sodden circuit with lights blazing through the darkness in the last race of the day.

A good day of car over-indulgence in good company!

Here’s a bit of a summary of the highlights:-

PCGB had their usual professional set-up with a large marquee to serve life-saving coffee throughout the day but also to serve as an entrance to the Wellington Grandstand behind which was exclusively reserved for member’s use.

Porsche GB were also nearby with very professional covered and open-air displays of various Porsche classic car, a mock-up of the Le Mans winning 919 and examples of many of their newer models.

Their early Pre-A 356 was just beautiful with its very simple and unadorned body work, quaint split windscreen and moon hubcaps.

Built in an old sawmill in Gmund, Austria this was one of the first fifty Porsche cars ever built between 1948 and 1950. Manufacturing eventually moved to Porsche premises in Zuffenhausen, Germany in 1950 once they were vacated by the occupying American forces.

Ferry Porsche was responsible for creating the 356 with body and chassis designed by Erwin Komenda and utilising VW mechanical components.

The first 356 prototype was a mid-engined open two-seater but the need for practicality in the austere post-war market demanded changing the design  to a rear engine layout making space for two small rear passenger seats.

What these small hand-built cars lacked in power was more than compensated by their light weight and superb aerodynamics which enabled them to achieve early competition success.

Porsche 550 racing cars were built between 1953 and 1956 in coupe and spider form. Based upon the 356 and influenced by the earlier Glockler produced race cars – the 550 was even lower, lighter and more powerful than the class winning 356 and it really cemented Porsche’s racing credentials through many successes in famous races of the day in factory and privateer hands. 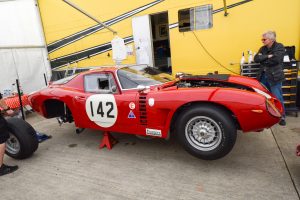 I’m a big fan of car designer and constructor Giotto Bizzarrini so I was delighted to see examples of his Bizzarrini Strada and Iso Grifo A3C cars in the International Paddock and later on-track in a race.

After leaving Ferrari along with a number of colleagues under an Enzo generated cloud – Bizzarini honed his sports car design ambitions on the Iso Grifo. He then left Iso to form his own eponymous manufacturing company in his home town of Livorno to build the Strada and Cross models based on his Grifo design.

These cars benefitted massively from his experiments and ground breaking designs at Alfa Romeo and later Ferrari.

He put all the lessons he’d learned on lowering the centre of gravity and placing the engine and transmission as centrally as possible in the creation of the Iso Grifo and the Bizzarrini Strada and Corsa models.

Looking under the bonnet of the cars is just great as you are faced with a 5.3 Chevrolet Corvette engine pushed right back into the chassis (and the cabin) to make it almost mid-engined.

Later in the day – the blue car fought a great battle in the leading pack during the Pre ’66 Classic GT race against beefy AC Cobra’s, E-TYpes and TVR Griffith’s.

One very important Bizzarrini designed car I spotted under cover late-on in the day was is what is known as the “Breadvan” Ferrari. Actually a 250GT built after Bizzarrini had left Ferrari specifically to beat the Ferrari 250GTO (Bizzarrini’s final design at Ferrari).

I don’t recollect ever having seen one of these in the flesh but this might have something to do with the fact that only three Elva GT160 prototypes were produced in 1964.

This rather beautiful car utilising a sophisticated space frame chassis and dry-sump BMW 2.0L engine was a by-product of Elva’s vast experience in building single seater and sports racing cars following the foundation of the company by Frank Nichols in 1955.

The purposeful bodywork of the GT160 really stands out thanks to its Trevor Fiore (nee Frost) designed bodywork. It was built by Carozzeria Fissore in Turin presumably during Fiore’s tenure there as designer. Fiore created some incredible car designs including the Monteverdi Hai, the Trident Clipper and various designs for TVR and Citroen (most notably the Karin and Xenia concept cars).

Weighing-in at just 559kg and with around 185bhp on tap – this car had a fantastic power to weight ratio. It seems a tragedy that perceived high manufacturing costs prevented this car from going into production.

I spotted this in the BMW club area on the outside of the track.

Frazer Nash – founded in 1922 by Archibald Frazer Nash are one of those wonderful companies that managed to have a massive influence on British and German car manufacturing.

From 1934 – AFN became importers and assemblers of BMW cars (badging them as Frazer Nash BMW’s) and after the war – they acquired the rights to the BMW 328 engine. This straight-six engine was used by   AC in the Ace, Aceca and Greyhound models, by Bristol and in many race car applications.

In 1954 – AFN became the sole distributor of Porsche cars in Britain and the success of this relationship eventually resulted in AFN being sold to Porsche GB in 1987.

The BMW 328 is an extremely robust yet handsome car produced between 1936 and 1940. It achieved creditable class wins in a number of race and hillclimb events including the Mille Miglia, Le Mans, La Turbie, RAC Tourist Trophy, Eiffelrennen etc.

Ironically the first BMW car – the Dixi was an Austin 7 built under license in Germany and in a peculiar reverse link back to post WWII Britain – it is acknowledged that the Mille Miglia bodywork for the 328 influenced the body-work design of the ground-breaking Jaguar XK120. 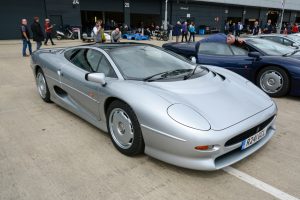 There were lots of jags on display and on track this included a massive turn-out of XJ220 cars mainly lined up in the International paddock.

E-Types were also well represented as usual with a large number of Lightweight and Low-Drag versions. The low drag cars with their riveted alloy bodywork are lovely looking cars. 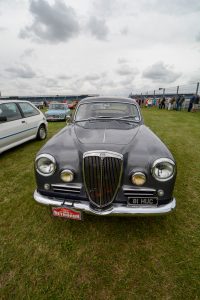 Older Lancias are wonderfully elegant cars and it’s really nice to see them at events such as Silverstone Classic. 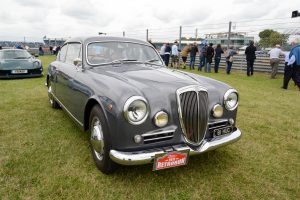 An Aurelia B20 was the first Lancia that caught my eye. This was the progenitor of all GT cars to follow with it’s fast-back rear bodywork and powered by the first production V6 engine – it was built for comfortable but spirited trans-continental touring. 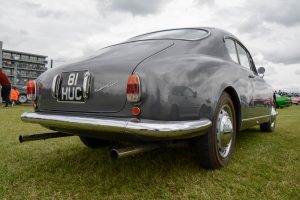 Produced between 1950 and 1958 – it was created by the legendary engineer Vittorio Jano who designed some fantastically successful road and race cars for Alfa Romeo, Lancia and Ferrari. 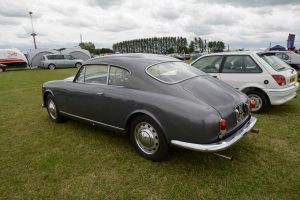 Other design features included a transaxle gearbox, inboard drum brakes and it was the first car to be fitted as standard with radial tyres.

Of the other Lancias on display – two lovely Flaminias stood out but of these the  Zagato bodied version was my favourite with its flowing lines and trademark double-bubble roof.

You can always guarantee lots of lovely Lotuses out on track at classic racing events but this time there was an equally good display of Lotus models in the club area.

I was most impressed by the large number of Elites on show. These beautiful little cars with their fibreglass monocoque design were the fore-runners of the carbon fibre monocoque concept which came along much much later.

Continuing the Italian theme – I can’t leave out Maserati. there were some beautiful cars to see – especially those tucked away in paddock garages between races.

Maserati engine bays are a work of art with mechanical components as beautiful as there are purposeful and potent. The T61 with it’s exposed small bore tubular “Birdcage” chassis was particularly nice.

Here are a few more motors that caught my eye.