With this year’s 356 International Event being hosted in the UK – it was essential to attended at least one of their many outings in order to see such a large concentration of these wonderful vehicles.

The gathering at Castle Hedingham seemed like the best option with it’s beautiful setting and the added bonus of some mediaeval jousting!

The run out to Hedingham also offered a good chance the exercise my old 911 which has been garage-bound for some months thanks to the dreadful weather.

Unusually for such events – no other Porsche’s materialised en-route with the exception of one 356 heading in the opposite direction (presumable to collect someone from Stansted). Shame – it’s always nice to arrive in a classic Porsche convoy!

Once parked up – it was lovely to wander through the serried ranks of beautiful 356’s lined up along the driveway and around the castle keep. 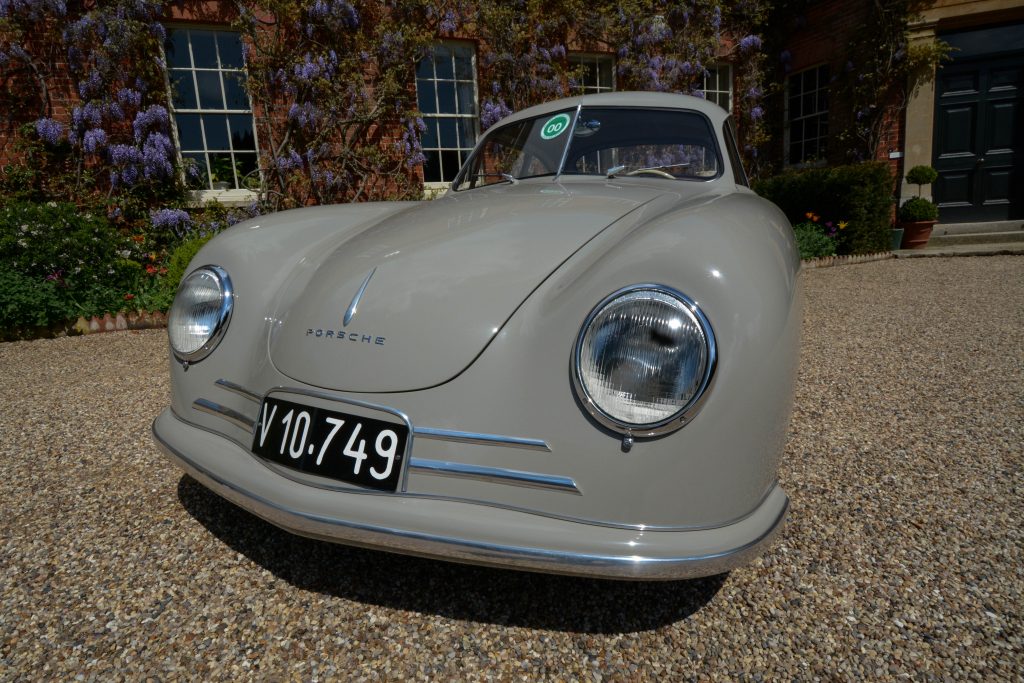 Walking up the drive to the castle keep – my attention was immediately drawn to the stunning sight of an extremely early Gmund 356 parked in glorious isolation in front of the “new” house. 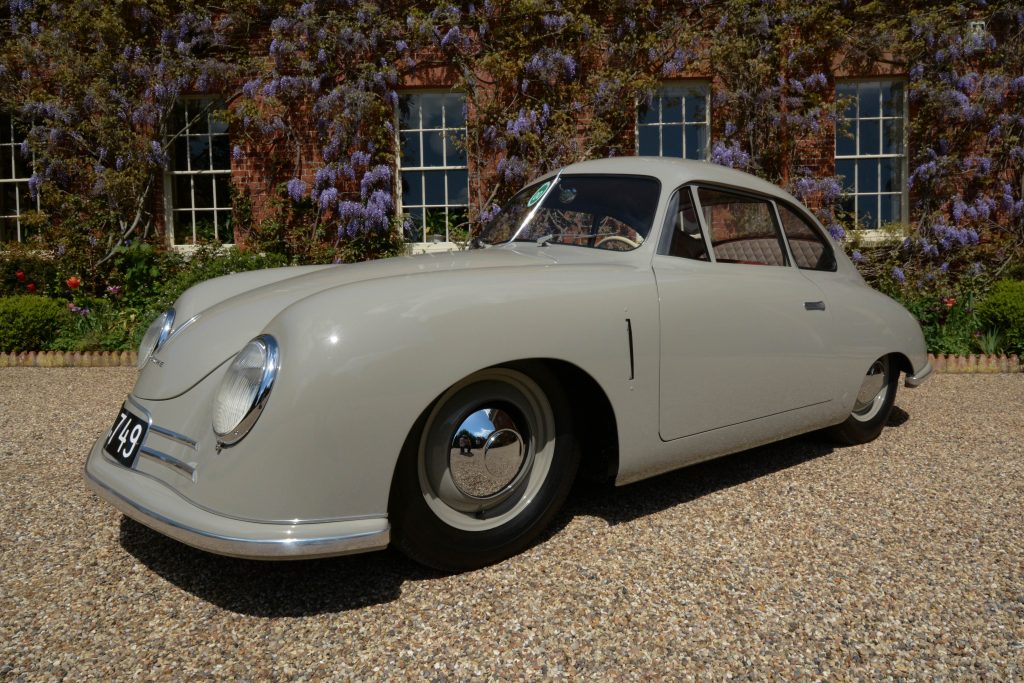 The manufacture of Porsche cars started in 1948 in the less than salubrious temporary accommodation of an old sawmill in the town of Gmund situated in Lower Austria. Just fifty cars were hand built in Gmund over a two year period until Porsche were able to re-occupy their premises in Zuffenhausen, Germany after occupying American forces vacated the premises. 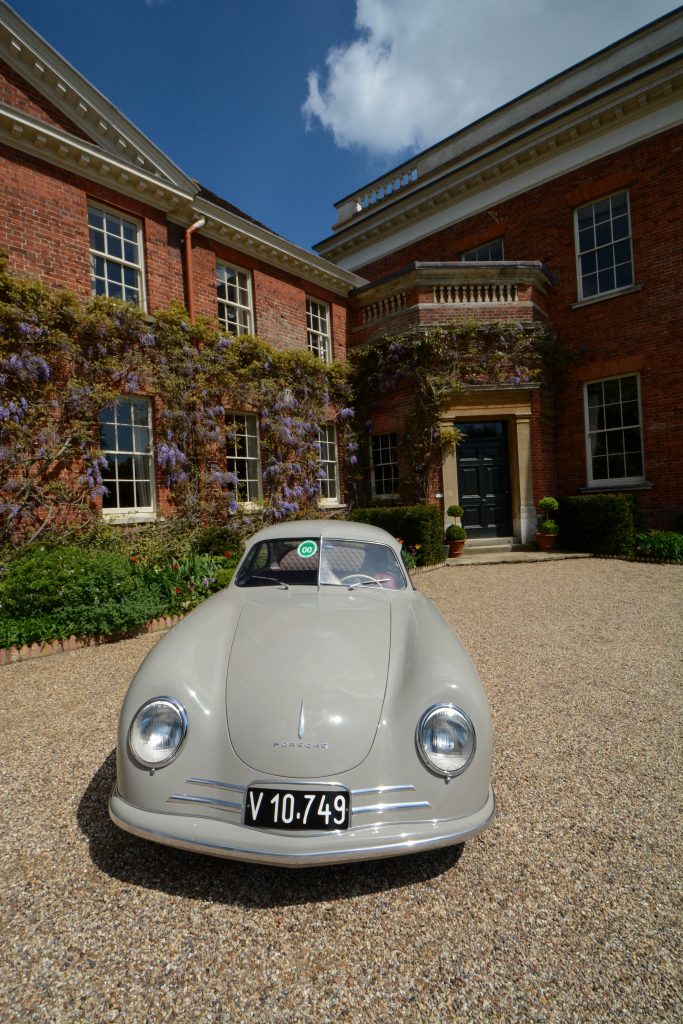 The first fifty cars built built in Gmund have near mythical status amongst Porsche cognoscenti and specific cars are often referred to by their build number in reverential terms.

Erwin Komenda’s body/chassis design incorporated ideas first tried out on the pre-war Type-64 (Type 60K10) that was intended to take part in the 1939 Berlin-Rome race but WWII got in the way. Having initially built a mid-engined prototype – 356 production versions opted for rear engine configuration to cater for 2+2 accommodation. 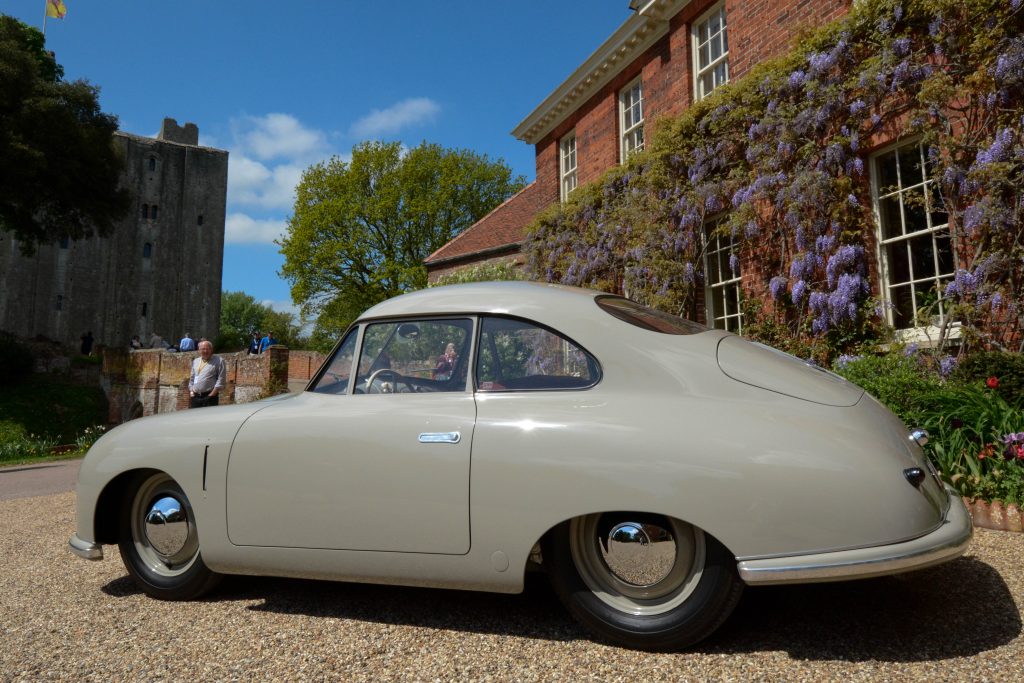 The relatively meagre power provided by the rear mounted VW Beetle derived engine in these early 356’s was offset by the light body/chassis combination and the very low drag coefficient of the curvaceous bodywork. These features and rock-solid reliability made the cars immediately successful in motor racing from the outset and this set the scene for Porsche’s continued racing success to this day. 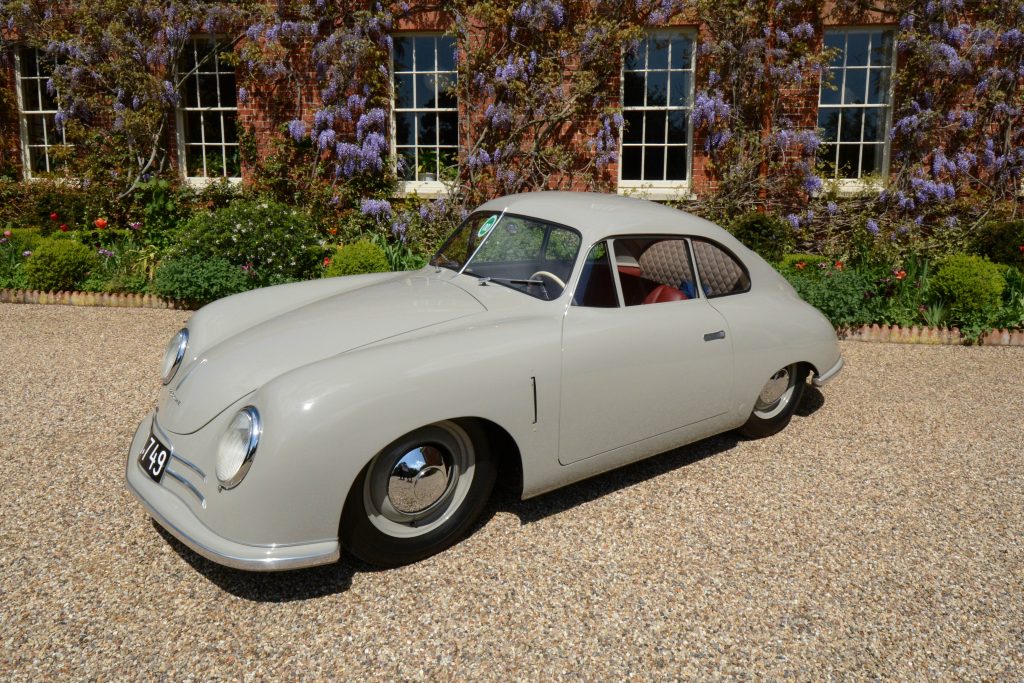 Looking at the Gmund cars today – it’s very hard to appreciate how revolutionary they must have appeared when compared with contemporary cars. The smooth and all enveloping  bodywork of the 356 was in stark contrast the bluff radiator grilles, running boards and separate headlights of other cars of the period. 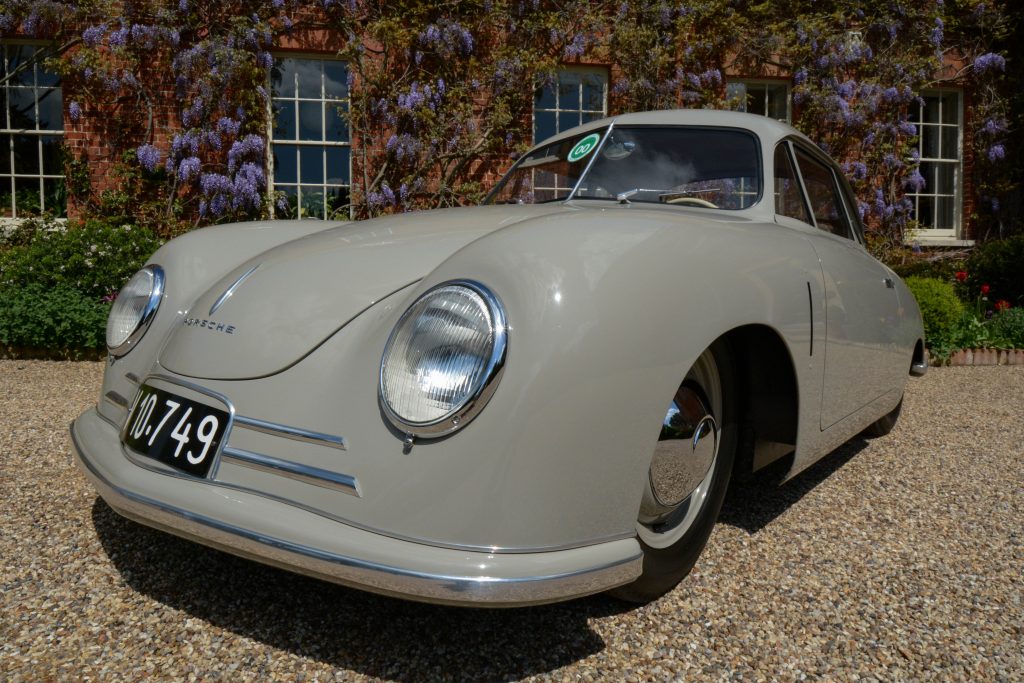 As outdoor entertainment goes – it doesn’t get much better than a bit of mediaeval jousting and associated combat skills. A fun mix of extremely dangerous looking show fighting and pantomime laced with some seriously skilful horsemanship. 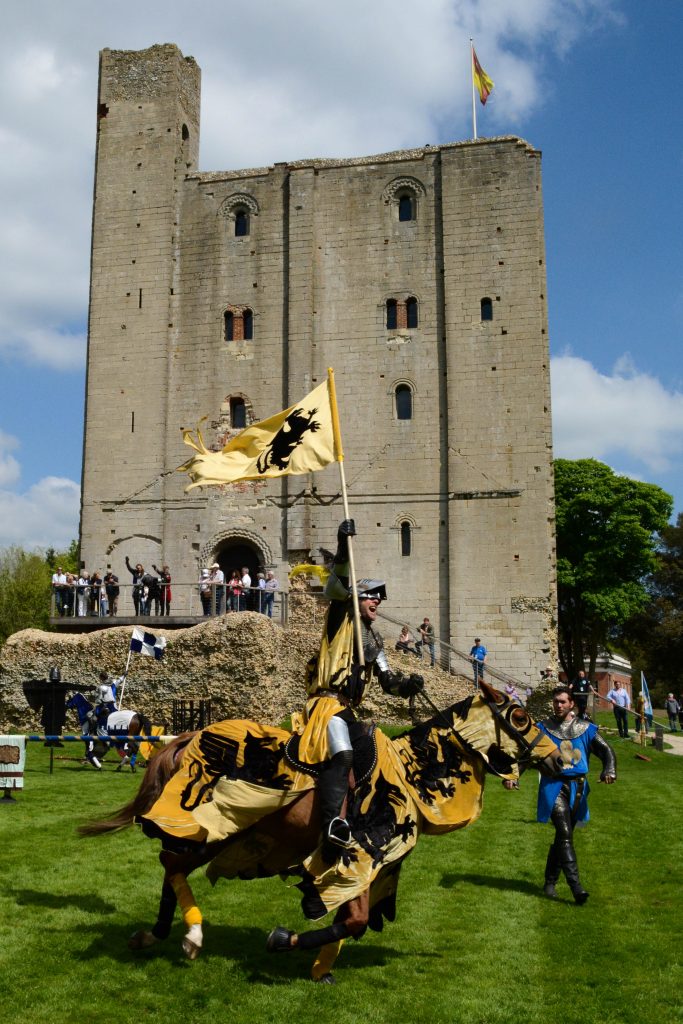 The gathered Porsche owners were treated to a great display against the magnificent backdrop of Hedinghams Norman castle keep. 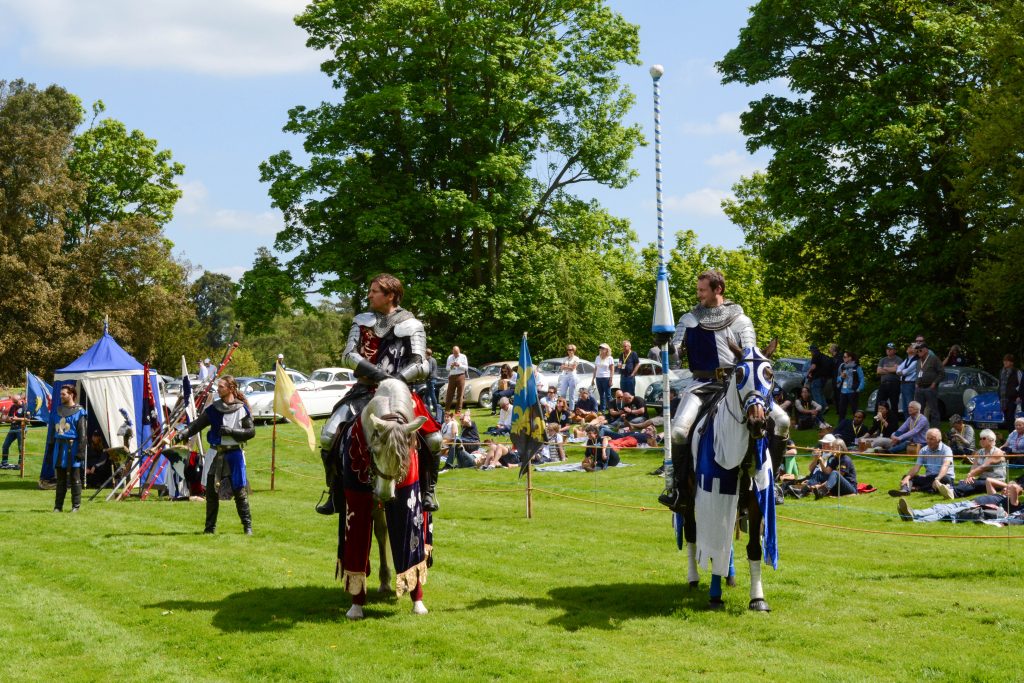 Ye olde “MC” for the event did a great job of whipping up partisan cheering for the good knights and raucous booing for the nasty, cheating bad knights. Not sure if all of the international crowd understood the comment about having to rely upon Romford as a source of peasants heads! 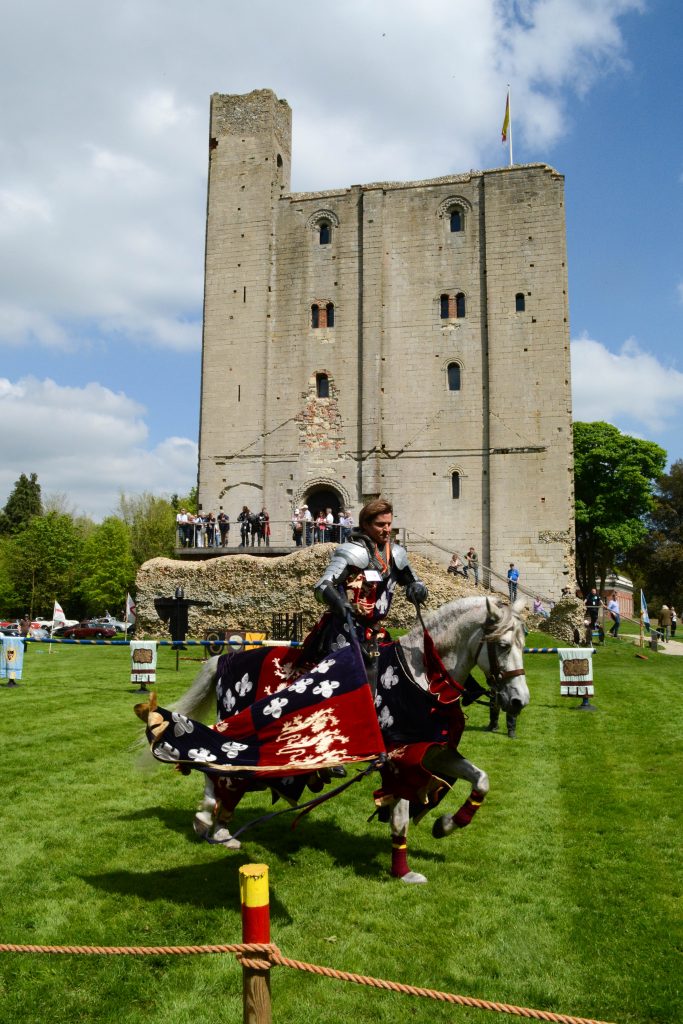 The Knights of Middle England put on a fabulously entertaining display. It was great fun and I recommend seeing them wherever they are performing.

Setting aside acts of chivalrous derring-do – the real stars of the event were of course the 356’s of all ages, body styles and hues. My personal predilection is for the coupe models but on a sunny day like the day of the event – cabriolets and speedsters looked like the perfect choice for cruising country roads with the sun beating down on your head.

Distinguishing specific 356 models (Gmund, Pre-A, A T1, A T2, B T5, B T6 and C), body types (Coupe, Cabriolet, Convertible-D, Karmann Notch-back, Speedster and Roadster) and sub-types (Carrera, Continental, Super, S, S90, C, SC, GS and GT is an art that I haven’t fully mastered but my studies continue and I’m slowly getting there by using basic reference points such as:-

I could bore for England!