I was reading an article in the Nov/Dec 2013 edition of Classic Porsche about a recent celebration at the Nurburgring of the late, great Stefan Bellof and it reminded me of the times I’d seen him race in Group C endurance cars in the early 80s.

I was fortunate to see him during a period where he was one vital half of a wonderful racing partnership with Derek Bell driving a Porsche 956 in the Rothmans sponsored factory team. What I didn’t realise was that Bellof was idolised by a young up and coming fellow German driver – Michael Schumacher! Shades of the Vettel & Schumacher relationship in more recent times.

Stefan Bellof is perhaps most famous for setting the fastest lap at the Nordschleife track at the Nurburgring. His “unofficial” qualifying time for the Nurburgring 1000kms in 1983 was at an average speed of 202.073km/h meant he was the first person to beat the magical 200km/h average speed barrier. It delivered him pole position for the race by a full 5 seconds and the record has never been beaten.

During the race – Bellof set an “official” fastest lap with an average speed of 194.33km/h but unfortunately crashed allowing Jackie Ickx and Jochen Mass to take victory in the Number 1 Rothmans 956.

Bellof was tragically killed in 1985 following a collision and subsequent heavy crash into the barriers at the Spa 1000kms. This brought an untimely end to a talented, versatile and very fast driver.

He’d made a real name for himself in Sportscars (in Factory and Privateer Porsches) and in F1 (driving for Tyrrell) and it’s rumoured that prior to the Spa crash – he’d impressed Enzo so much that he was on course to be offered an F1 seat at Ferrari. This could have resulted in Bellof out-Schumachering Schumacher long before the latter graduated to F1 and well before the younger German moved to the Ferrari team at the start of what became a golden period for them.

In the same magazine article it was nice to read that former team mates (Derek Bell, Jochen Mass and Hans Stuck Jr.) turned up to join Bellof’s family, friends and fans to celebrate his life.

What better way to do this than to have Derek Bell drive the recently restored 956 that he shared with Bellof around the Nordschleife, taking in the newly named “Stefan-Bellof-S” curve.

Whilst I came physically close enough to get these photos of Derek Bell – I couldn’t claim to know him but from what I’ve seen he comes across as a true Brit racing gent. The pairing of Bell’s racing maturity and balance when combined with Bellof’s exuberance and outright speed was a fantastic combination.

It strikes me that had the Endurance combination of Bell and Bellof lasted longer – the tragic accident that robbed motorsport of Bellof’s talents might have been avoided, but Bellof was already well on the way to prioritising his F1 career so perhaps this was not to be. 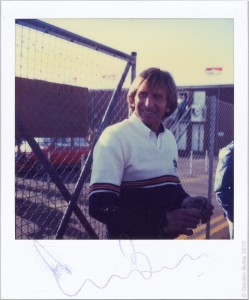 Autographed Polaroid above. Thanks Gordon

Coming back to Bell however – his 5 Le Mans wins set him apart as an iconic sportscar/endurance racer. It’s arguable that his 5 wins during what was a much more dangerous era stand up against the more recent more prolific (numerically) racing tallies of the likes of Tom Kristensen.

Here we go – I have to own up to an added interest and respect for  Bell through his involvement in the making of classic Steve McQueen film “Le Mans”. Bell with a number of other endurance drivers and enthusiasts were recruited by McQueen right after the 1970 Le Mans race to stay on in France as stunt drivers and providers of cars in the making of this this film.

McQueen was first and foremost a highly proficient motorcycle bike rider with a special penchant for desert dirt bike racing with his buddies. He even competed for America (with his buddies) in the 1964 ISDT team. His passion for speed however eventually propelled him into car racing and he proved himself to be a very competent driver from the outset by winning his first amateur car racing event.

McQueen’s aim with “Le Mans” was to create the best, most realistic movie about motorsports ever made. He started this massive gamble through his own Solar production company by having cameras fitted to cars participating in the 1970 Le Mans race to provide highly authentic race footage having already sorted out best camera angles during the Ford GT40 winning 69 race. Despite the all important filming duties – the Solar Productions Porsche 908 camera car entered for the 1970 race still managed to finish 9th overall!

One interesting fact is that McQueen came within a whisker of actually competing in the 1970 Le Mans race. He’d already achieved 2nd at Sebring in a Porsche 908 so his race credentials were not in dispute BUT the studio were dead against his participation at Le Mans. His compromise however was to get the studio to allow him to drive in the full speed (230mph+) post Le Mans race filming sequences.

The studio’s stance was understandable but in retrospect a real shame. Other actors – most especially Paul Newman took the more radical step of moving away from acting and film production to focus exclusively on racing and this resulted in Newman establishing his own long running race team and in him coming within a whisker winning Le Mans outright in a Porsche 935 shared with Dick Barbour and Rolf Stommelen.

Once the 1970 race proper was completed – McQueen recruited a number of the race drivers to stay on in France and he bought a number of former Le Mans and GT race cars to be modified to feature or at least look like the main protagonists – Porsche 917s and Ferrari 512s. A GT40 was modified (by having its roof cut off) to act as a second camera car and David Piper provided a number of surplus Lolas (some to be modified to look like Ferraris) and Piper also drove as a stunt driver until his terrible accident.

Making a film of the most iconic endurance race proved to be no less difficult and traumatic than actually participating in the real race in that the stunt driver were exposed to the same risks and inevitably accidents occurred. David Piper had a massive high speed accident in which a tyre blow-out on his Porsche 917 caused him to crash heavily into the armco. This resulted in Piper losing the lower part of his leg.  McQueen had Piper flown back to London in his private plane to receive the best possible medical attention and care.

Anyway the upshot of this wonderful folly was (as I heard Derek Bell describe in a talk at one of the Chelsea Autolegends events) – a fantastic bonding between true race drivers and a true race enthusiast to create what still stands as the most authentic race film ever. Apologies to Ron Howard – I’ve not yet seen Rush so I’ll be interested to see what can be achieved by an admitted non-enthusiast of car racing. As a result of making Rush – Ron Howard has been converted into a big racing  enthusiast but I can’t quite see that reaching the same level as McQueen. Let’s see if Ron does any stunt driving in his next racing film!

In “Le Mans” – McQueen’s character (Michael Delaney) drove the most beautiful but brutally fast Gulf/Wyer blue and orange liveried Porsche 917. This as one of my most favourite cars. Just imagine clattering down the Mulsanne Straight in a 917 at 240mph. Delany’s main rivals in the film were the Ferrari 512s.

What a great race this was. Factory 956’s pitted against a gaggle of often equally fast 956 privateers, the super fast but fragile Ferrari powered Lancia LC2s and a whole host of prototypes and production GTs. The driver line up on the grid was unbelievable with a mix of former and current F1 drivers and endurance specialists.

Jochen Mass and Jackie Ickx were driving the Number 1 Rothmans 956. This was one of the longer running and most successful driver pairings although both also drove with other drivers (Mass with Bellof and Ickx with Bell).

In more recent years it was nice to see the Ickx family racing tradition continued by Jackie’s daughter Vanina during her multiple drives at Le Mans.

Between these four Porsche drivers they amassed an amazing number of race wins including the Jewel In The Endurance Crown -Le Mans!

It’s great to see the veteran Pescarolo still competing with his own cars and team in the Endurance series. Vanina Ickx even raced in one of his cars at Le Mans.

With the exception of the fast and highly experienced Bob Wollek, Lancia kept to an entirely Italian driver line-up including F1 stars such as Ricardo Patrese and Mauro Baldi as well as Paulo Barilla, Beppe Gabbiani and Pierluigi Martini.

At other times Michele Alboreto and Teo Fabi were also used  as very fast and effective Lancia drivers.

Silverstone’s big sky weather was as always threatening to dump something wet and cold down onto the proceedings before returning to deceivingly sunny skies. Coming from Cumbria – I should be used to changeable weather but Silverstone seems to specialise in springing meteorological mayhem on you whatever the time of year. I’m sure I remember experiencing horizontal sleet there in August!

Anyway – I was hoping for a repeat of the 83 race when the Number 2 factory team pairing of experienced Bell and exuberant Belloff  beat the Number one duo of Jochen Mass and Jackie Ickx.

This year – it was not to be. Mass and Ickx were unbeatable in the Number 1 Rothmans 956 finishing 2 laps ahead of the Joest Racing 956 of Ludwig and Pescarolo.

Bell and Bellof finished a (for them) lowly 10th a full 17 laps behind the winning car and with no fewer than seven Porsche 956s and two Lancia LC2s ahead of them.

Not entirely certain if it was this race but I do remember one C2 car – I think it was a 956 coming on 3 wheels after losing a wheel somewhere on the circuit. The car was so well balance – it was able to drive on the remaining 3 without the chassis dragging on the ground. It rolled serenely into the pits to be fitted with a new wheel and it went on it;s way.

I have a similalrly hazy memory of seeing one car coming into the pits with a whole front corner of its bodywork missing. It turned out that the unfortunate car had hit an even more unfortunate hare at around 200 mph on a fast bit of the circuit. It’s amazing what damage a hare can do when it’s running considerably more slowly that the car that hits it. Anyway – the whole front of the car was quickly swapped and off it went to wreak more carnage on the Silverstone hare population.

The tiny Mazda was amazing to watch and hear. Running in the Group C Junior category – it had  a tiny little turbocharged (2 rotor) Wankel rotary engine which gave it the sound of a very noisy, demented bee as it buzzed past. Sadly it failed to finish due to an oil leak which was a real shame as for a long time it seemed to be running like clockwork.